20 Things You Didn't Know About... Kissing

Our unique human lips, the conquests that carried kissing, and how kissing makes men and women more like each other 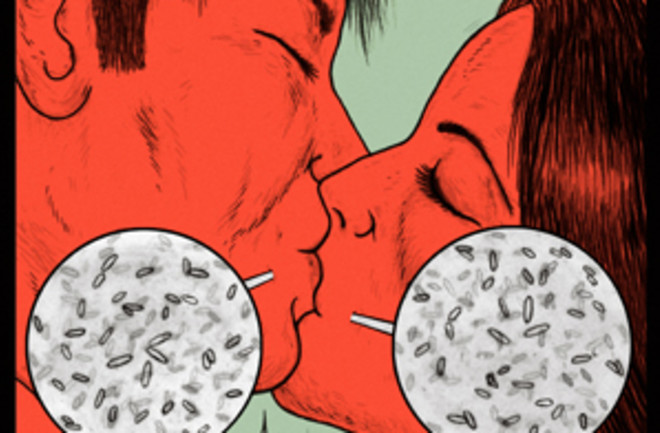 1 Only you: Human lips are different from those of all other animals because they are everted, meaning that they purse outward.

2  But we are not the only species to engage in kissing-like behaviors. Great apes press their lips together to express excitement, affection, or reconciliation.

3 Scientists are not sure why humans kiss, but some think the answer lies in early feeding experiences. Through nursing and (in some cultures) receiving pre-chewed food from a parent's mouth, infants may learn to associate lip pressure with a loving act.

4  Another possibility: Smelling a loved one's cheek has long served as a means of recognition in cultures around the world, from New Zealand to Alaska. Over time, a brush of the lips may have become a traditional accompaniment.

5  And yet kissing is not universal, leading some experts, like anthropologist Vaughn Bryant of Texas A&M, to think it might actually be a learned behavior.

6 The Roman military introduced kissing to many non-kissing cultures (after its conquests were over, presumably); later it was European explorers who carried the torch.

7 Being close enough to kiss helps our noses assess compatibility. In a landmark study, evolutionary biologist Claus Wedekind of the University of Lausanne in Switzerland reported that women prefer the scents of men whose immunity-coding genes are different from their own. Mixing genes that way may produce offspring with a stronger immune system.

8 Wedekind's experiment, widely known as the sweaty T-shirt study, involved very little sweat. Male participants were asked to shower beforehand so their scent would be faint.

9 The earliest literary evidence for kissing comes from northern Indias Vedic Sanskrit texts, written 1,000 to 2,000 years ago. A portion of the Satapatha Brahmana mentions lovers setting mouth to mouth.

10  Love Is the Drug: Dopamine, a neurotransmitter associated with feelings of desire and reward, spikes in response to novel experiences, which explains why a kiss with someone new can feel so special.

11 In some people, a jolt of dopamine can cause a loss of appetite and an inability to sleep, symptoms commonly associated with falling in love.

12 Can't Get Enough of Your Love: Dopamine is produced in the ventral tegmental area of the brain, the same region affected by addictive drugs like cocaine.

13 In men, a passionate kiss can also promote the hormone oxytocin (video), which fosters bonding and attachment, according to behavioral neuroscientist Wendy Hill of Lafayette College in Pennsylvania.

15 And a passionate kiss has the same effect as belladonna in making our pupils dilate.

16 Prelude to a Kiss: Two-thirds of all people turn their head to the right when kissing, according to psychologist Onur Gntrkn of Ruhr-University Bochum in Germany. This behavior may mirror the head-turning preference observed in babies and even in fetuses.

18 The exchange of saliva could provide a reproductive advantage for males. During an open-mouthed kiss, a man passes a bit of testosterone to his partner. Over weeks and months, repeated kissing could enhance a female's libido, making her more receptive to sex.

19 Always brush and floss, boys. Evolutionary psychologist Gordon Gallup of the State University of New York at Albany found that when deciding whether to kiss someone, women pay much closer attention than men do to the breath and teeth of their partner.