Zoonoses: The Diseases Our Cats and Dogs Give Us

Zoonotic diseases can jump from animals to humans. While it's rare to get infected by our pets, there are a host of pathogens to watch out for. 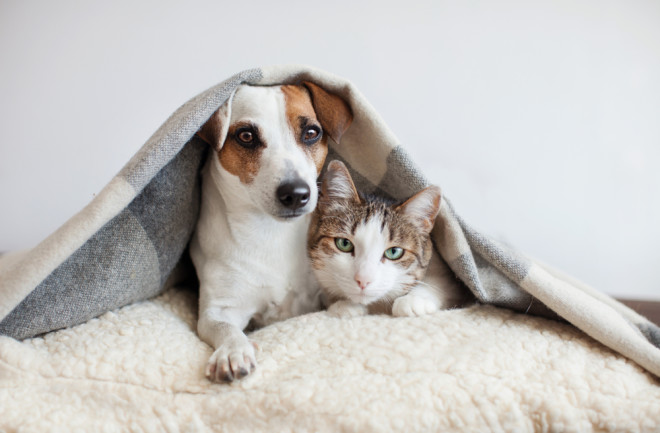 Some of the biggest public health crises of the last few years can be traced back to animals. HIV got its start as a virus in monkeys, and Ebola probably jumped to humans from other primates or fruit bats. And there’s no points for guessing the animals from which we got bird flu and swine flu. But animal-borne diseases can start a lot closer to home. In fact, there are a number we can pick up from our dogs and cats.

Our Pets, Their Diseases

Most diseases that can jump from animals to humans, called zoonotic diseases, affect species to which we’re closely related, like monkeys. But even though humans are pretty distant relatives of cats and dogs, we can still catch diseases from them simply because of how much time we spend together.

“We have this much more intimate relationship with our companion animals than we do with wildlife and other things we might come across,” says William Sander, an assistant professor of preventive medicine and public health at the College of Veterinary Medicine at the University of Illinois at Urbana-Champaign. “There’s just a more increased chance of that happening.” It’s like the thought experiment of giving a monkey a typewriter — with enough time, odds are that it’ll randomly plunk out Hamlet. Only instead of iambic pentameter, it’s disease.

There are some diseases in which our pets act as carriers, like when dogs bring in ticks that give their owners Lyme disease. The diseases that we can catch directly from larger animals like mammals and birds are rarer, but in the right circumstances, they can pack a wallop.

The Centers for Disease Control and Prevention estimates that about 4.7 million people are bitten by dogs in the U.S. every year. Similar stats on cat scratches are harder to come by, but if this writer’s experience is universal, cat owners are scratched approximately a bajillion times a day. Naturally occurring bacteria in dogs’ and cats’ mouths and claws don’t hurt their hosts, but can cause infection if humans get exposed. Some of the most common of these are Pasteurella from cat bites, Bartonella from cat claws, and Capnocytophaga from dog bites. In healthy adults, they don’t usually present much of a problem; but in children and people with compromised immune systems, cat scratch fever can land patients in the hospital, and bites infected with Capnocytophaga can become septic.

In addition to diseases we can get from bites and scratches, there are a bunch we can get from what Sander refers to as “the fecal-oral route.” It’s what it sounds like — you get some infected poop on your hand, make yourself a sandwich, and voilà. Dogs and cats can both spread E. coli and Salmonella through their feces. Dogs can give us Giardia, Cryptosporidium, and roundworms, all of which can cause nasty gastrointestinal symptoms. Cats, meanwhile, can deposit the single-celled parasite Toxoplasma gondii into their litter boxes, where, if we’re not careful about washing up after cleaning them, we can acquire the disease toxoplasmosis. Healthy adults can usually avoid infection (the CDC estimates that 11 percent of Americans are infected with Toxoplasma, with no symptoms of toxoplasmosis), but young children and immunocompromised people can develop seizures and neurological problems.

A recurring theme with all these illnesses is that, if you’re a healthy adult, you don’t have much to worry about. Even rabies, a zoonotic disease that’s traumatized everyone who’s ever seen Old Yeller, isn’t much of a concern these days. “It’s really rare in the U.S. at this point. We have maybe two or three people every two or three years,” Sander says.

The fatal nervous system disease has become uncommon, in part, because people have been vaccinating their pets against it for decades. But Sander notes we shouldn’t get lulled into a false sense of security. “I think people forget about it sometimes and don’t vaccinate as well as they should,” Sander says. “Cats are now the animal that we see in the U.S. with rabies, and it’s mostly because people forget or don’t bother to get their cats vaccinated.”

Rabies is one of the few pet-borne illnesses that has a vaccine, but Sander has tips on preventing other diseases spread by dogs and cats. The roundworms that dogs can give to humans can be taken care of by your dog’s monthly heartworm pill. If you get bitten or scratched by a pet, keep the wound clean, and if you see signs of infection — like redness, pus or fever — tell your doctor. “If you do get sick, I think it is important that you go to the doctor and let them know that you do own ‘x’ pet — a dog, a cat, bird, whatever it is — just so it’s on their radar as well,” Sander says. As for preventing all the fecal-oral diseases, there’s a pretty easy fix.

“The biggest advice I give to owners is practicing proper handwashing and ensuring proper husbandry, so that the cat litter box is being cleaned out on a regular basis, ensuring that the poop outside is being picked up regularly from your dog, and using plastic bags to do that and not using your hands directly to pick it up,” Sander says. “If you do those sorts of things, you’re gonna have really no risk of getting most of these infections.”

And, just to clarify, what constitutes “proper handwashing”?

“You’re really supposed to do at least 20 seconds of good handwashing with soap and making sure that you’re getting the front and back of your hand, that you’re really cleaning around the cuticle and your nail bed,” Sander says. “Usually, singing the song ‘Happy Birthday’ to yourself twice gets you to that."

More From Discover
Health
Malaria Vaccines Could Be Game-Changers
Health
mRNA Will Do More than Conquer COVID
Planet Earth
A Behavior-Manipulating Parasite May Be Leading Wildlife to the Lion’s Den
Health
Autoimmune Diseases Are on the Rise, Along With More Promising Preventative Measures
Health
Omicron Variant: What We Know So Far
Health
Deer Can Carry the Coronavirus: Here's What That Means for the Pandemic
Recommendations From Our Store
My Science ShopDiscover STEM Kits
My Science ShopDiscover 2022 Calendar
My Science ShopStrange Science
My Science ShopElements Flashcards
Shop Now
Stay Curious
Join
Our List