Got Zin? Every year around Superbowl weekend, a few thousand Zinfandel enthusiasts trek to San Francisco for the annual ZAP Festival. ZAP stands for Zinfandel Advocates and Producers. I am a card carrying member and like to think of myself as a ZAP-bar (Zinfandel Advocate and anti-Producer). The festival is held at the Fort Mason Center in two huge warehouses that stick out on piers into the Bay. It is the largest wine tasting in the world! Roughly 300 wineries come and pour their stuff and it amounts to around 1000 different wines to taste, all in a single afternoon. 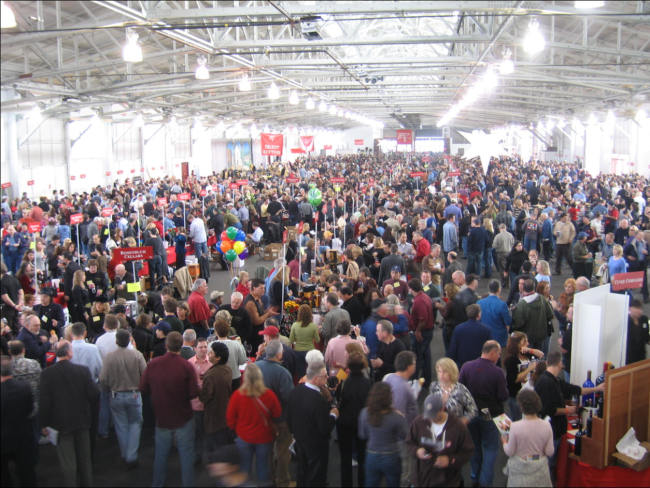 OK, even I admit, that's impossible. The trick is to remember that this is a tasting and not a drinking festival. The wineries pour tastes, not glassfuls. There are spit buckets everywhere and in theory one is supposed to take a taste and spit rather than swallow. Although I doubt if anyone spit out the Turley Hayne Vineyard which retails for $75/bottle and is impossible to find. I had 3 tastes of that...had to calibrate my tastebuds, ya know. At the end of the day, I tasted about 50-60 wines and spit about half of them. This year was my 13th festival and I have a Zinfandel Festival tasting routine. First, it's essential to eat a large lunch. Never taste on an empty stomach. Second, I arrive early, about 30-45 minutes before the doors open. The line is manageable at that point, but quickly grows to a disaster if one is any later. Once I'm inside, I head straight for Turley. I like to calibrate my tastebuds with one of my favorite wines. That way, if anything else I taste afterwards holds up, I know it's good juice. I try to taste a balance of wines that I know and wines that I don't. I also like to taste the really expensive ones that I can't afford to buy (like the Hayne Turley...). Afterwards, I walk around the city, take some blurry photographs, have some coffee, and eat dinner before driving home. What is special about Zinfandel that causes thousands of fanatics to come from all over and attend this event? Besides the fact that it just plain tastes good, of course? Zinfandel is known as America's Heritage Grape and is basically grown only in California. The origin of Zinfandel has been the subject of much scientific investigation and puzzlement and the quest makes for an interesting story. Hypotheses that it originated in the US were long-time favored. Researchers later discovered that Zinfandel is a genetic match to Primitivo, grown mainly in the boot of Italy. However, Primitivo has only been grown in Itlay for 150-200 years, which is a short time in the history of wine, so it seemed unlikely that it was Zinfandel's true parentage. Researchers speculated that perhaps Primitivo was brought across the Adriatic Sea from Croatia. Bingo! In 2001, scientists working in the field in Croatia and at the Enology lab at UC Davis found a perfect DNA match between Zinfandel and the rare old Croatian grape of Crljenak Kastelanski. Other Croatian varieties such as Plavac Mali and Dobricic are Zinfandel's brothers and sisters. It was first imported into the US in the 1820's by a nursery on Long Island. I'm glad they changed the name - you gotta admit that Zinfandel is much easier to pronounce. Zinfandel is grown in every wine region in California and some "old-vine" vineyards date to the 1880's. Needless to say, there is a special taste to Zinfandel made from 100-yr old vines. Old-vine Zin yields characteristics like graphite, licorice and slate, and is often very spicy â€" mainly pepper - and earthy. These old vineyards tend to be known by name. Just mention the words Pagani Ranch, Geyersille, Duarte, Monte Rosso, Dickerson, or Grandpere and a Zinfandel lover's eyes will light up. Newer vines tend to give a more jammy or plumy taste. So, what were the new finds from the tasting? Sidejob Cellars was pouring their very first bottling and it held up well to the Turley. It will be released in March. They are so new, they don't even have a website yet. Plungerhead Vineyards won the award for the best name and offered a good quality to price ratio. Another lesser-known favorite is Macchia from the Lodi area. For people wanting to get started with Zinfandel, I recommend the three R's: Ravenswood, Ridge, and Rosenblum. All 3 have a diverse set of bottlings at a variety of costs, starting with a Vintner's Cuvee, then blends from a single County, and then single vineyard bottlings including some 100-yr old vines. It's a great way to be introduced to the many variations of this marvelous grape! Oh, and by the way, it goes without saying, of course, that Zinfandel is a red wine.