There isn’t any proven correlation between coffee and height. But there are some health risks for excessive caffeine consumption in children. 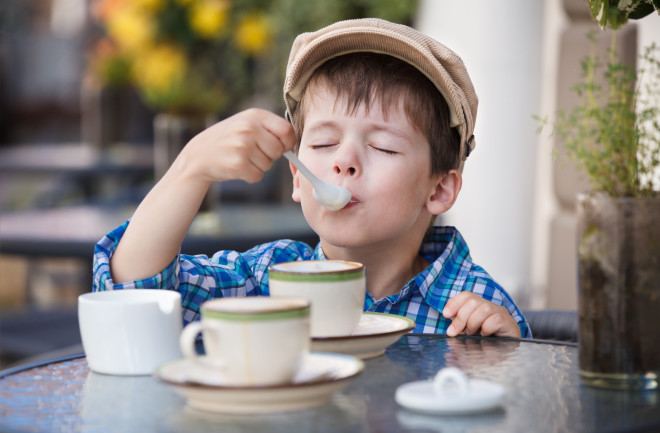 If you were ever a kid who wanted to try coffee, you might have heard that you shouldn’t drink it because it stunts growth. It’s a common urban legend about the drink, and is at least part of the reason why it’s commonly regarded as exclusively for adults or older teenagers. The line of thinking behind this rumor is connected to the high amounts of the stimulant caffeine — roughly 95 milligrams per cup of coffee. The concern has been that so much caffeine can negatively affect body bone mineral gain or hip bone density, thus inhibiting growth in kids. The question is whether there is any truth to this.

Research suggests mostly no. There are a few health risks to caffeine that should be considered before drinking it. But in terms of height, there isn’t any real scientific evidence that coffee, or caffeine in general, has an actual adversarial effect.

Some studies on adults have shown that consuming caffeinated beverages might cause the body to absorb slightly less calcium, which helps bone growth; however, the minimal difference is negligible. A 1998 study by researchers at Penn State College of Medicine looked at the impact of coffee on adolescents by tracking the caffeine intake of 81 female subjects over the course of six years, from when they were 12 to when they turned 18. The girls were divided into three groups based on their mean daily caffeine intake. When the study ended, the researchers found no correlation between caffeine intake and the average bone gain or height of the three groups.

The myth that coffee can impact children’s height may stem from a series of ads for a caffeine-free coffee alternative called Postum that was popular in the early 1900s, according to Smithsonian Magazine. The company behind Postum ran ads claiming coffee should never be drunk by children, including false claims about its health effects. One of those ads, from 1933, explicitly stated that drinking coffee would hamper a child’s growth. However, none of Postum’s claims had any scientific backing behind them.

That said, even though coffee and height have no proven correlation, excessive caffeine consumption can have a negative effect on human health, especially for younger children. There haven’t been many extensive studies on how coffee specifically affects kids, but studies on the impact of caffeine in children show that it can affect blood pressure, heart rate, sleep patterns, and anxiety.

While there aren’t any U.S. federal guidelines on caffeine consumption in children, the American Academy of Pediatrics generally discourages kids from consuming caffeine. Canada has more in-depth guidelines, recommending kids under the age of 4 avoid caffeine, and providing limits to daily caffeine consumption based on age and body weight.

Research does suggest there is nothing about coffee that makes it worse for kids than any other caffeinated drinks like sodas or tea. So, while you should probably wait until your child is a little older to give them coffee, it’s not going to stunt growth. And caffeinated soda and energy drinks may pose equal or greater risks.