In some cases, static stretching might do more harm than good. 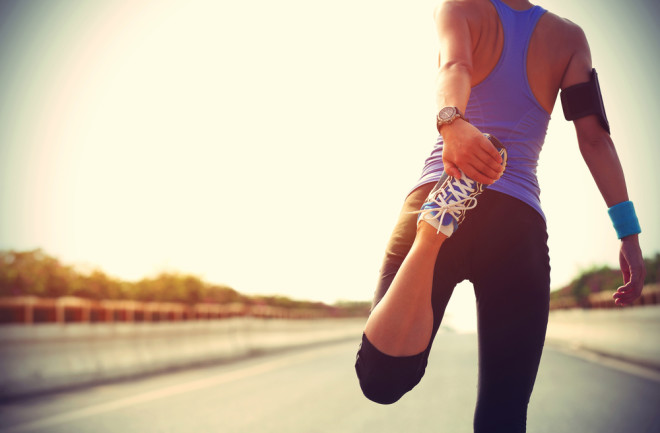 Maybe your junior high gym class gave you the idea that before you workout, you need to stretch. Touching your toes might help prevent injury, you might have heard, or help you run as fast as you could.

But decades of research have found that static stretching — where you reach and hold your position for several seconds — before exercising doesn’t help. It’s possible that instead, the movements do the opposite of what you want them to: Make you perform worse and make you more likely to get hurt.

“If the goal is to improve performance, then you usually don't do static stretching prior,” says Nick Kruse, an exercise physiologist at the University of Iowa. Instead, it might be better to swap in another warm-up before your run, and maybe move the static stretches to another part of the day.

In 2016, a team of researchers across the U.K. and Australia gathered and analyzed a range of papers looking into static stretching and runner performance and summed up the situation bluntly. “It has been suggested that the tendency to incorporate stretching into the regimes of athletes was based not on science but assumption,” they wrote.

Stretching would theoretically help runners use energy efficiently, keep from being too sore after exercise and reduce the odds of common chronic injuries, like achilles tendinopathy and plantar fasciitis. But the research available indicated that static stretching didn’t seem to do much for runners at all. When talking specifically about stretching right before the workout, some studies found that the habit lowered overall performance for runners. In fact, one study in the 1990s found that among untrained runners, the least-flexible participants used their energy most efficiently.

For runners, stiffness helps make sure as much muscle power as possible goes into creating motion. If joints are too loosey-goosey, researchers hypothesize, then runners might drain some of their energy having to re-stabilize their body every time their foot hits the ground. Other activities demand and can benefit from more flexibility — dancers might need their legs to go above their heads, and gymnasts can’t exactly have a tight back — and the authors recognize that when an athlete might need their muscles to lengthen while they work, a steady stretching schedule could be helpful.

If someone wants to avoid going directly from their desk chair into, say, sprint intervals, there’s more evidence to suggest that dynamic stretching could be a better warm up. A 2017 review on the studies examining this stretch format, which involves gentle movements like leg swings that build into larger motions, ranges from unhelpful to beneficial for athletes. How these exercises help athletes isn’t clear, the researchers say, though maybe the results have something to do with the fact that the muscles are contracting and starting to work as someone warms up.

The Sit-And-Reach Has Its Place

The preference for dynamic stretching — and condemnation of static movements as a harmful pre-workout choice — gave the latter a bad reputation, Kruse says. “Because of these seminal studies that were done, it just kind of spread like a wildfire. Athletes, coaches, all the way up to clinical practice, they're like, you need to stop doing this.”

But for people who aren’t athletes or coaches, or even regularly exercising, there’s growing evidence that static stretching can improve cardiovascular health. In one study conducted in Japan, middle-aged men maintained their normal activity levels while adding in four weeks of regular stretching, where they held positions for 20 seconds. At the end of the month, measures of how stiff their arteries were — a quality used to help assess risk of cardiovascular disease — had improved. In Italy, a 12-week stretching regimen asked participants to stretch both sides of the body, one side or neither. The program found that the first two groups both saw an improvement in blood vessel function and stiffness, though some changes lasted only six weeks.

Like with the dynamic stretching and workouts, researchers aren’t positive how static stretching might help heart health. “The mechanism is kind of why I'm in this area,” Kruse says. “We don't know exactly what's going on.” Maybe the nervous system is getting involved, and maybe the temporary oxygen reduction a stretch creates in a muscle — and the subsequent rush of oxygen that happens after release — plays a role. Future research will try and tease out exactly what’s happening in the blood vessels to explain any heart-health benefits.

Depending on where the research goes, Kruse thinks stretching could be a plausible workout alternative to improve cardiovascular health for elderly individuals, those recovering from illness like a stroke, or even tired parents who don't have the time and energy for a full workout. So it's possible, your old gym teacher was right: A static stretch could do you good, just maybe before math class instead of dodgeball.