For better or worse, many of us run on caffeine on a daily basis. Rather than pay the price in the afternoon, or in sleepless nights, try tips and tricks to handle the caffeine crash. 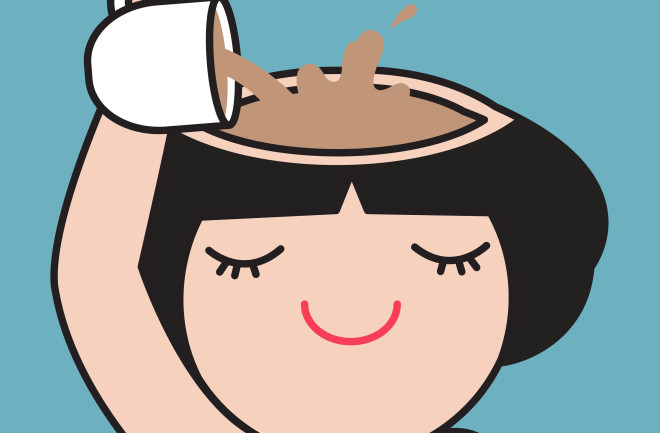 Caffeine can make you feel on top of the world, allowing you to perform at your peak. Yet, for many of us, it comes with a steep price.

As its effects start to wear off, usually in the afternoon, that on-top-of-the-world feeling can transform into a “do I still have a brain?” sentiment. Caffeine can also interfere with sleep, which leads to a vicious cycle of drink coffee, can’t sleep, drink even more coffee, repeat.

Finally, when some of us go too long between doses, we experience intense withdrawal symptoms. Think headache, lethargy, and the feeling as if your brain has been replaced by static electricity. These symptoms can start kicking in within 16 hours of your last dose, according to a 2010 study on 379 people.

(By the way: When caffeine addicts drink coffee, they may not experience a true energy boost, but rather a reduction of our withdrawal symptoms. This is why caffeine studies require coffee abstinence for a week or more).

If you’re sick of the downsides, know this: There’s another way, and it doesn’t necessarily involve splitting up with caffeine for good. Before learning the remedy, however, you’ll need a quick lesson in neurochemistry.

The Wake Up and the Crash

Many people think of coffee beans when they think of caffeine, but the stimulant is actually found in at least 60 different plants, where it functions as a natural pesticide. When ingested by humans, caffeine improves physical endurance and strength, and enhances memory, attention, and mood.

To understand why caffeine gives us such a boost, imagine a parking lot with a limited number of spaces, says Nanci Guest, a caffeine researcher at University of Toronto and lead author on the International Society of Sports Nutrition’s formal position on caffeine and exercise performance.

When caffeine floods your brain, it parks in spaces (technically called receptors) usually reserved for adenosine, a brain molecule that makes you feel sleepy. When caffeine hogs up all the spaces, adenosine can’t park. So it circles the lot. In addition to preventing adenosine from communicating the “calm, relaxed, let’s maybe take a nap” signal, caffeine also triggers the release of other alertness-producing brain chemicals like norepinephrine and dopamine, among others.

But this effect has a time limit; around lunch or midday, you might experience a letdown. That’s because in the morning, there aren’t that many adenosine molecules circulating since your brain cleared them while you were sleeping. As the day wears on, however, more and more of them show up in search of a parking space. At the same time, the caffeine cars start to call it quits and vacate the receptor spaces. As more adenosine cars park and more caffeine cars leave, you’ll start to feel groggy.

How to Avoid a Caffeine Crash

If you’re one of those genetically gifted people who can take or leave caffeine, then consider skipping it in the morning. Instead, only have caffeine when you feel tired. By delivering the stimulant only as needed, you increase its effectiveness, according to Guest.

For people who experience intense withdrawal, however, here’s another strategy: When you wake, consume less caffeine than you think you need. The right dose of caffeine can improve performance. Drink too much, however, and you’ll likely feel “on,” but actually struggle to concentrate. That’s because you’re overstimulated, which makes you restless, anxious, and unfocused. “When you’re at your desk and you have too much physical energy, it can be distracting,” Guest says.

As far as finding the best dose, you’ll likely need to experiment to find your personal sweet spot. Aim for something in the neighborhood of 1 to 2 milligrams of caffeine per each kilogram of body weight. To simplify that conversion (especially for those who haven’t yet had their caffeine today), here’s the math for several body weights and the proportional amount of caffeine below:

Table that lists body weight and kilograms for caffeine.

Try This In the Afternoon

The great news is, if you get your morning coffee dose just right, you might not experience a crash in the afternoon. That said, it’s also possible that, as the caffeine wears off, you’ll start to feel groggy.

For a pick-me-up, consider a small caffeine hit. (Note emphasis on “small.”) Consume too much caffeine too late in the day and you’ll likely sleep fitfully that night, setting up that vicious cycle mentioned above. For the best results:

Do This in the Evening

Some people swear that they can drink a cup of coffee at 10 p.m. and fall asleep 10 minutes later. If you’re one of them, know that your sleep quality is likely suffering, and you may not even be aware of it.

In a 2021 study that monitored brain activity in participants during sleep, caffeine ingestion seemed to prevent deeper, more restorative sleep. Without this deep sleep, your brain doesn’t thoroughly recover overnight, which sets you up for what some people call “the caffeine and sleep sandwich.” The following day, you struggle to feel alert, which leads to more caffeine which leads to worse sleep and the cycle continues.

To achieve the glorious state of all-day energy, you’ll most likely need to finagle with the above advice. That’s because your genetics will affect your results, says Guest. Keep a journal for a few weeks, taking note of your energy levels, sleep habits and caffeine dose. Eventually, with some experimentation and iteration, you’ll find a “personalized caffeine regimen” that works best for you personally.