Your Appendix: The Enigma Inside You

Some researchers are questioning this organ’s reputation for uselessness, while others look for novel ways to treat its malfunctions. 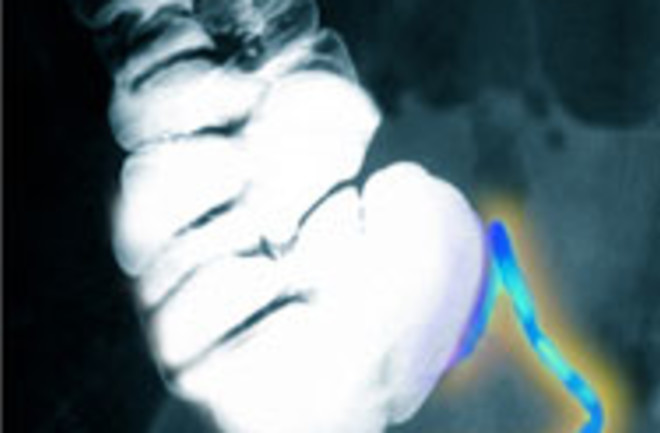 Does the appendix (seen in blue in this X-ray) keep your gut healthy? | Image: Scott Camazine/Photo Researchers

The appendix, the small, dead-end pouch attached to the large intestine, is popularly known as the body part that does nothing except cause trouble: About 1 in 10 of us will suffer from an inflamed appendix at some point. Doctors and scientists are still unsure whether the appendix normally performs any useful function, nor do they fully comprehend what causes it to go haywire. Only recently have researchers begun to dig up some meaningful clues about this seemingly useless body part.

Immunologist William Parker of Duke University examined samples of normal tissue from organ donors and from patients who had healthy appendixes removed during other surgeries. He found that friendly bacteria thrive in the appendix, suggesting that the organ is a haven for beneficial microbes. During infections good bacteria in the gut can become depleted; the appendix may repopulate our internal ecosystem after an illness. “Think of your appendix as a part of your immune system,” Parker says. In this view, appendicitis is an immune system overreaction, in much the way that misdirected immune activity can bring on inflammation in people with allergies and asthma.

Another take comes from surgeon Edward Livingston at the University of Texas Southwestern Medical Center. Examining 37 years of data on hospital admissions for appendicitis and the flu, he and his colleagues have found that appendicitis rates vary roughly in parallel with influenza infections. Livingston proposes that a viral infection might trigger inflammation of the appendix, damaging it and enabling harmful bacteria to enter. If so, many cases might be treatable with antibiotics rather than surgery. This summer, he says, “We are starting a trial treating appendicitis without operating.”