You might not realize it, but you’re constantly smelling your own hands to learn about the people and world around you. 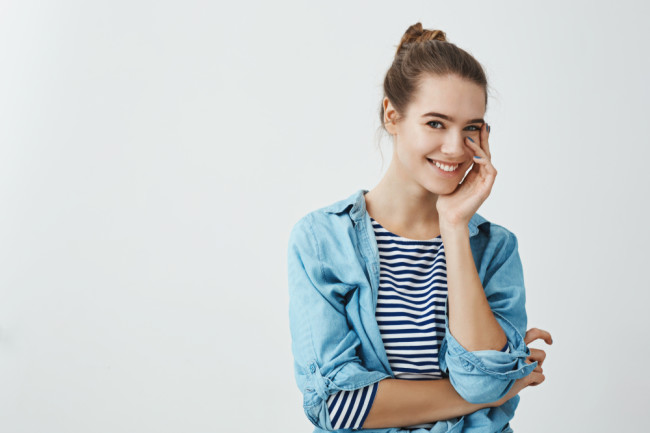 Someone touching their face is probably unconsciously sniffing their hand. (Credit: Cookie Studio/Shutterstock)

COVID-19 has separated us from the world in surprising ways. Yes, we all miss our friends and loved ones, and we miss going to restaurants and stores and movies and concerts. But there’s another pastime that COVID-19 has deprived us of, even if we don’t realize it: the simple pleasure of subconsciously touching our own faces and sniffing our hands.

As COVID-19 spread, the Centers for Disease Control and Prevention warned people against touching their faces — and for good reason: A 2006 study suggested that nearly 25 percent of respiratory disease transfer could be attributed to people touching their faces.

But avoiding it is easier said than done. We touch our faces all the time; several behavioral studies have put the numbers at more than a dozen times per hour. And, oftentimes, that face touching is accompanied by increased airflow into the nostrils: sniffing. Many researchers, including a team led by Noam Sobel at Israel’s Weizmann Institute of Science, argue that we sniff our hands so much in part because we’re picking up chemical signals (sometimes referred to as pheromones) that tell us about the people around us.

“We learn a lot about people when we smell them, even if we don’t know that we did it,” says Eva Mishor, a human olfaction researcher at the Weizmann Institute and co-first author of a recent paper on the subject. “We learn about their mental state, learn about their physical state, if they’re ill or healthy. And we need this, it’s a huge part of our way to learn about the world. It's a huge part of the decisions that we make.” She cites a well-studied example: fear sweat. The sweat we produce when we’re anxious has a particular scent, and when we smell it on others, we subconsciously trust them less.

“Not me!” you may protest. “I’m not some freak who goes around smelling people.” Well, not overtly. (Probably — we here at Discover don’t know your life.) “In Western society, you don’t come up close and sniff people,” says the paper’s co-first author Ofer Perl, a research fellow at the Icahn School of Medicine at Mount Sinai. “It’s considered a taboo.” So we smell people covertly, in ways that we might not even realize we’re doing; Sobel’s lab conducted a study in 2015 about people subconsciously smelling themselves after a handshake. And just as we don’t always realize when we’re sniffing, we often aren’t even aware that the data are being processed by our brains.

“Most of it happens in unconsciousness,” Jessica Freiherr, a neuroscientist at the Friedrich-Alexander University Erlangen-Nürnberg who was not involved with the recent Weizmann Institute study. When our brains process smells, they travel straight to areas that are responsible for memories and emotions, bypassing the parts of our brain that handle conscious thoughts. “You get emotions triggered, and also memories, through smells, but you’re not aware of it,” she explains.

How Do I Smell?

Social distancing to combat COVID-19 has cut us off from the handshakes and close contact that would give us a chance to smell people, even subconsciously. But in these days of Zoom meetings and Facetime happy hours, we still touch our own faces, even though there’s no one else to smell. That’s because a lot of the sniffing we do is self-directed.

In the Weizmann Institute team’s newly published study, they review previous studies showing how much subconscious smelling humans do, and also conducted a questionnaire asking people about the smelling that they’re aware of doing. Of the 404 people surveyed, 94 percent reported sniffing themselves at least sometimes. Since that’s a self-reported figure based on what they were (a) consciously aware of and (b) willing to admit, even on an anonymous questionnaire, we probably smell ourselves even more than the questionnaire reveals. (They’re still collecting data, if you want to bare your soul about how often you sniff your armpits.)

It makes sense for us to smell other people so we can learn about them — but why bother smelling ourselves? Aharon Ravia, one of the study’s authors at the Weizmann Institute, explains that we may smell ourselves to keep tabs on our own mental state and help interpret how we’re feeling. “It’s like using the hand like a mirror,” he says.

The next time you’re in a Zoom meeting, watch everyone’s hands. If you look closely, you might spot them flying to people’s faces as if to say, “It’s OK, you are still here, and you are safe. This too shall pass, and then you can hang up and get another snack from the kitchen.”

Editor's Note: This story has been updated to include that Eva Mishor is a human olfaction researcher.