Cases of the plague are nothing new — and are unlikely to ever cause a widespread epidemic like the Black Death. 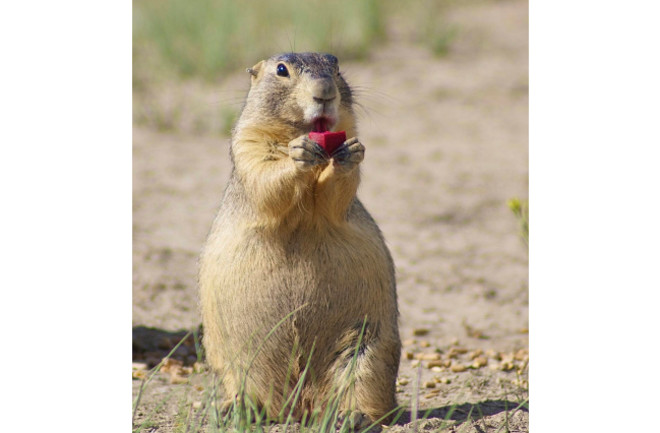 A prairie dog in Colorado munches on a plague vaccine. (Credit: Tonie Rocke/USGS)

So, a squirrel in Colorado tested positive for the bubonic plague. No, it’s not time to reach for a plague-doctor beak mask. Put down the bloodletting leeches. Stop gathering sage, sorrel and dandelion for a salve. Not just because these centuries-old remedies probably won't help, but also because the plague isn’t something 21st-century Americans have much to fear from. It’s been around for a while.

The recent squirrel case, which quickly made the rounds on national news outlets, was the first incident of the plague in Jefferson County, Colorado — but only since 2017, the county’s press release notes. Animal and human cases of bubonic plague are not all that uncommon in the United States, and the U.S. is only one of a handful of countries where plague still occurs. But cases rarely lead to widespread plague outbreaks. Plus, they're usually effectively controlled by national and local health agencies, common-sense precautions and, in worst case scenarios, by antibiotics.

Plague Is a Rare Occurrence

“It does have a pretty fearsome reputation from the history books, as it were, and so I think that reputation can elicit a lot of fear,” says Kiersten Kugeler, an epidemiologist at the Centers for Disease Control and Prevention and an expert on the plague. “Our goal at [the] CDC is to make sure that people understand that plague can be very severe and a fatal illness, but it is, in fact, very rare.”

In the U.S., the plague bacterium Yersinia pestis generally pops up in, on average, about seven human cases per year. From 2000 through 2009, there were 57 cases reported, and seven deaths. Two arose from scientists in unusual situations: one was conducting an autopsy on a mountain lion in his garage, and the other, two years later, was handling plague bacteria to use in gene insertion. Neither were believed to be wearing gloves, and neither reported the likely exposures when they sought medical care.

From 2013 to 2018, the World Health Organization counted 40 cases and five deaths in the U.S. These cases clustered in the far West and Southwest: New Mexico, Arizona, Colorado, California and Nevada.

Worldwide, plague occurs most in Africa, specifically in the Democratic Republic of the Congo, Madagascar, Uganda and the United Republic of Tanzania, with 2,773 cases and 487 deaths between them from 2013 to 2018. But the WHO notes that between 2008 and 2018, “the total number of cases worldwide has decreased tenfold.”

Fleas carry bubonic plague bacteria, much like they did in the famed 14th-century Black Death. They bite animals, usually rodents, which can then spread it to other animals. Humans can contract bubonic plague from the bite of a flea, contact with an infected animal (including its blood or infected tissue) or the cough of an infected animal. Rarely, humans can spread it to one another through droplets.

Pets, especially cats, are susceptible to plague — and can be the accidental culprits behind human infection through fleas on their body, bites, scratches or bodily fluids. The CDC recommends treating pets regularly for fleas, protecting pet food from rodents and limiting pets’ access to places rodents are likely to be.

Emilio DeBess, Oregon’s state public health veterinarian, says that flea bites are one of the most common ways humans contract plague. “Fleas have the ability to live inside your house in your carpeting,” he says. “Based on the inside temperature, they'll multiply very quickly and potentially cause a problem not only to your pet, but to the people that live in the house.”

In places with high rodent concentrations, especially in the western U.S., humans are more likely to come into contact with plague. Animals like squirrels, prairie dogs, chipmunks or rabbits can carry the fleas or infection. Again, it is still rare.

Of course, plague isn’t something to be taken lightly. And despite its rarity, now’s still not the time to channel Snow White and start petting chipmunks in the yard. In the event of human infection, the symptoms of bubonic plague can be pretty gruesome, depending on how someone was exposed to the bacteria. According to the CDC’s plague site, three kinds of plague can arise from Yersinia pestis.

The most common 'bubonic' variety occurs when an infected flea bites someone: A patient can have fever, chills, headaches and weakness along with painfully swollen lymph nodes called buboes. In 'septicemic' plague — which can come from a flea bite, but also from handling an infected animal — fever, chills and weakness can accompany abdominal pain, internal bleeding, and dead and blackened skin that can lead to loss of limbs.

A third kind, 'pneumonic' plague, can develop if the first two are left untreated, or if someone inhales infectious droplets. It’s characterized by pneumonia symptoms: chest pain, cough, bloody mucus and, in serious cases, respiratory failure. This more dangerous form of plague is the only variety that can spread from human to human through droplets.

If symptoms of plague appear, Kugeler says it’s very important to seek medical care as soon as possible. Doctors are likely to administer widely available antibiotics for varying lengths of time to clear the infection. And luckily, there are ways to stay safe before an infection occurs.

Most precautions are straightforward: Wear gloves if handling animals, especially dead ones. Use bug repellant and wear long pants to ward off fleas. Protect pets from places where they’re likely to encounter rodents, and keep them on flea medication. The CDC also recommends clearing piles of brush, rubble, firewood or other clutter from around your house. Don’t make it an inviting place for little creatures to stay. Stop pets from roaming out of sight and near wild animal habitats, and keep them off the bed if they do.

In another line of defense, local public health agencies work to make educational materials available, keep tabs on animal infections, conduct testing and issue warnings about cases to their communities.

Ultimately, the experts suggest combating concerns about the plague with practical information. “Fear is not warranted,” says Kugeler. “Just awareness and prevention and knowledge that this is a disease still with us, but we have tools now to not only prevent but also to treat and minimize human mortality.”

Editor's note: We've updated this story with the correct spelling of "pneumonic" plague. We apologize for the error.