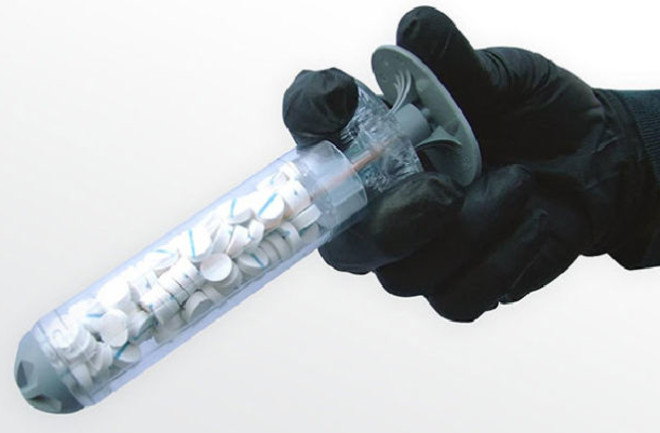 (Credit: RevMedx) A simple technology meant to stop major arterial bleeding has passed its first field test on the battlefield. The device, called XSTAT, was put to the test recently when a soldier with a gunshot wound to the thigh remained in critical condition after a seven-hour surgery failed to staunch the bleeding from his femoral artery. As a last resort, the forward medical team operating on the soldier decided to use the XSTAT, an oversized syringe filled with absorbent sponges that are injected directly into a wound. The treatment worked, the company says, halting the bleeding in 20 seconds, and allowing the patient to be moved to a care facility with more resources.

The XSTAT was developed by RevMedx, a medical device company based on Oregon, and was designed with this kind of situation in mind. A wide syringe is filled with sponges just a few millimeters in diameter, which can each soak up around 3 milliliters of blood. As they soak up fluids, the sponges expand to 10 times their original size, filling the wound and exerting enough pressure to stop the bleeding. The sponges are made from wood pulp and coated with chitosan, a substance derived from shrimp shells and which serves as an anti-microbial clotting agent. The small sponges are also emblazoned with a prominent marker that shows up on X-rays, ensuring that no sponges get left behind in the body. The pocket-sized device was fast-tracked for approval by the FDA and sent out into the field in 2015, where it could replace bulky gauze pads. A civilian version was also approved late last year, although there is no word on whether it has been used yet. The device is especially useful in so-called junctional wounds, or injuries in places where our limbs meet the torso. Tourniquets and traditional methods of stemming bleeding don't work as well in these kinds of wounds. The company says that the treatment plugs a wound for roughly four hours, during which time a patient can be stabilized with blood transfusions and moved to a hospital.

PhenQ Reviews: Is It Worth the Money? Know This Before Buying