Would you have your fetus genetically tested?

There's a variable in the GSS, GENESELF, which asks:

Today, tests are being developed that make it possible to detect serious genetic defects before a baby is born. But so far, it is impossible either to treat or to correct most of them. If (you/your partner) were pregnant, would you want (her) to have a test to find out if the baby has any serious genetic defects?

This is relevant today especially. First, the technology is getting better and better. Second, couples are waiting longer to start families. Unfortunately this question was only asked in 1990, 1996, and 2004. But on the positive side the sample sizes were large. I decided to combine 1990 and 1996 into one class. Also, I combined those who were very liberal with liberals, and did the same for conservatives. For political party ideology I lumped strong to weak identifiers. For intelligence I used WORDSUM. 0-4 were "dull," 5-7 "average," and 8-10 "smart." For some variables there weren't results for the 1990s. The biggest surprise for me is that there wasn't much difference between the 1990s and 2004. The second biggest surprise was that the differences between demographics were somewhat smaller than I'd expected, and often nonexistent. Below is a barplot and table with the results. 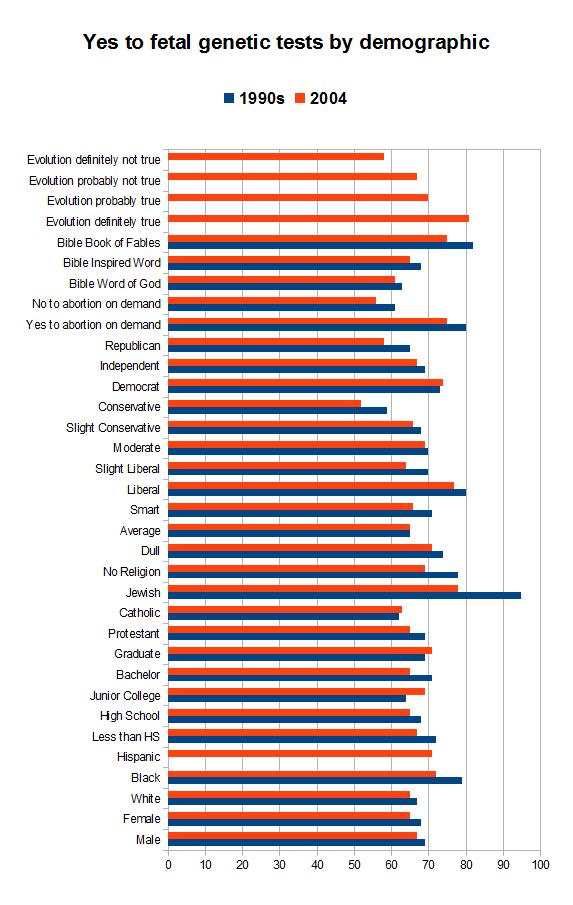 Yes to abortion on demand8075

No to abortion on demand6156