Fluctuations in the food chain mean there are tons of ticks out in the woods, and they'll be looking at us humans as food. 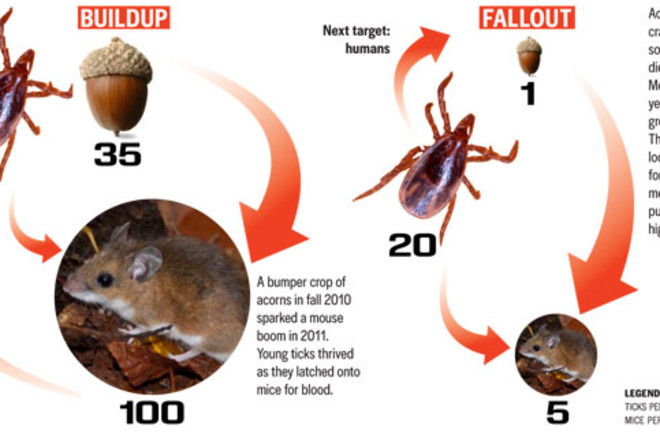 Outdoors lovers beware: This summer could bring an unprecedented spike in Lyme disease. Richard Ostfeld of the Cary Institute of Ecosystem Studies in New York reports that risk in the Northeast and mid-Atlantic states rises and falls with acorn crops. Acorns are an important food source for the white-footed mouse, a popular target of the ticks that carry the Lyme bacterium. Ostfeld’s surveys suggest that a recent crash in acorns will cause the mouse population to plummet, leaving more black-legged ticks to bite us. Up to 90 percent of Lyme infections go unreported, but the national record for confirmed cases, set in 2009, is 30,000. That number could rise 20 percent in 2012.

Update, July 11, 2012: A more recent study suggests that the tick population is a more complicated question involving more factors than just mice, acorns, and deer. Specifically, the researchers found that in some areas, the number of rodent-eating predators like foxes seemed to move inversely with the prevalence of Lyme disease; when those predators disappear, the disease may get a boost.