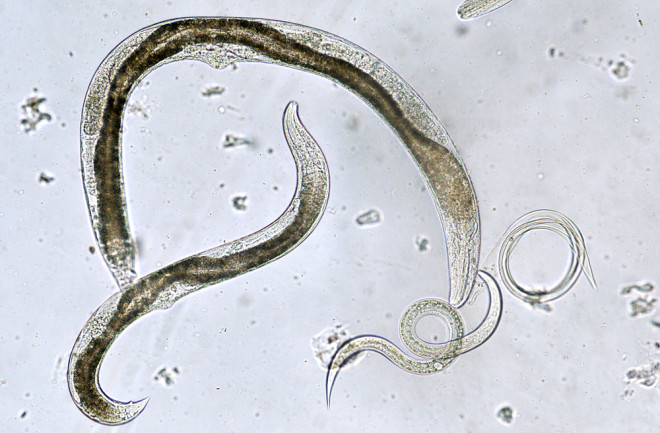 Humans share some of the same genes involved in aging with nematodes. (Credit: D. Kucharski K. Kucharska/Shutterstock) Could reprogramming our genes be the key to a long life? A new study from a team of researchers at ETH Zurich suggests that it may be possible. The team sifted through 40,000 different genes from nematodes, zebra fish and mice, and identified 30 genes common to each species — and humans — that significantly influenced the aging process. Researchers found that inhibiting a single gene in nematodes extended their lifetimes by up to 25 percent. The finding is yet another insight into the genetic basis of long-term health and longevity.

Finding genes shared between species indicates that they are orthologous, that is, they originated from a common ancestor. In other words, genes that appear in nematodes may also appear in humans, which means life-prolonging effects observed in a primitive worm could potentially carry over to us. To see how certain genes affected longevity, researchers systematically blocked each of the 30 genes shared by nematodes and humans that were also associated with aging. Individually blocking these genes allowed researchers to isolate the individual effects of each one, and determine to how they impacted nematodes' lifespan. The process left them with 12 genes that increased lifespan by 5 percent or more. However, one gene shined brighter than the rest: bcat-1. Researchers found that when this gene was blocked in nematodes their average lifespan jumped by up to 25 percent, far more than the roughly 5 percent increase obtained by blocking the other 11 genes. Their experiment comprised approximately 100 nematodes and measured mean lifespan as one indicator of vitality. Researchers also measured how fast the nematodes moved, and how often they reproduced as they advanced in age. Nematodes improved in all these measures when bcat-1 was suppressed. Researchers published their study Tuesday in the journal

Amino Acids Are The Key

Like all genes, bcat-1 assembles proteins into enzymes by copying information to messenger RNA, much like creating a blueprint. The particular enzyme produced by bcat-1 is responsible for breaking down branched-chain amino acids (BCAAs), which are organic compounds — leucine, isoleucine and valine — vital for muscle building and are commonly found in exercise supplements. When researchers blocked bcat-1, it allowed BCAAs to build up in the worms' bodies, setting off a complicated chain reaction that ultimately promoted longevity. BCAAs, researchers say, stave off cellular death by promoting the growth of mitochondria, structures within cells that produce energy. A link between increased levels of BCAAs and longer lifespan had been previously documented in experiments with mice and yeast. However, this is the first time that a genetic solution has been found to promote BCAA proliferation — addressing the problem at its source. The researchers found that simply adding BCAAs to a nematode control group's food supply had a positive effect on aging. However, the positive effect wore off with time because the bcat-1 gene was still active, causing their BCAA levels to drop. Human tests involving gene inhibition are still in the works, constrained by the moral difficulties of toying with human lifespans. However, researchers are hoping to test the theory by measuring various health conditions, such as heart disease. The end goal of their research isn't to achieve human immortality, but to improve humans' quality of life. "The point is not for people to grow even older, but rather to stay healthy for longer," said Michael Ristow, one of the study's authors.