Workplace Wellness Programs Change Some Behaviors But Not Outcomes 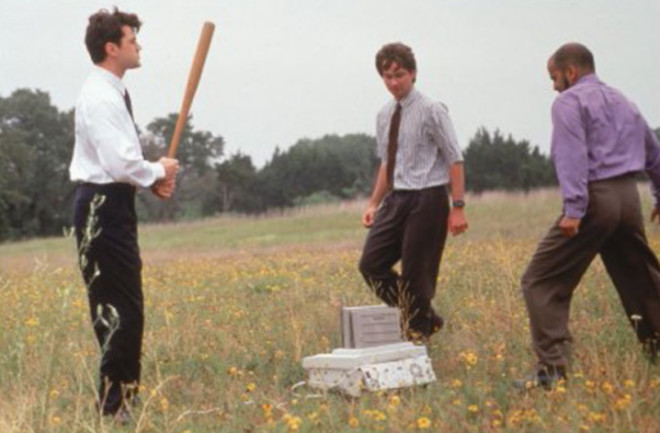 Workplace wellness can mean different things in different places, but new research suggests traditional programs are not effective. (Credit: Twentieth Century Fox) Turns out workplace wellness programs don't work so well. According to a large-scale study over 18 months — the first of its kind to study the issue — initiatives intended to help employees get healthier and more productive, and cost the boss less money, have decidedly lackluster results. Some employees did adopt better behaviors — or at least said they did. However, health outcomes and productivity did not change, and there was no benefit to the company's bottom line. In the U.S., about four out of five large employers include a workplace wellness program as part of their health benefits package. Specifics vary, but such initiatives might include free screenings to identify potential health issues, and incentives to modify behavior, such as smoking cessation or weight-loss coaching. Usually promoted as a way to improve an individual's health, the programs are not entirely altruistic. They're intended to foster healthy workers who use less health insurance and call in sick less often — boosting productivity and lowering employer expenses. Indirectly, the thinking is that healthy workers are more likely to be happy workers, and less likely to seek employment elsewhere, which saves their employer the cost of recruiting and hiring a replacement. Employers pour about $8 billion annually into these programs, but the first major randomized, controlled test of their value suggests workplace wellness has a lousy return on investment. Work It Out Researchers followed more than 30,000 employees at 160 sites over 18 months. Twenty randomly selected sites offered a wellness program to a total of about 4,000 employees. The other 140 sites, serving as a control, did not offer any wellness options. The good news is that, at workplaces with wellness programs in place, the self-reported rates of workers exercising regularly and actively managing their weight were 8.3 and 13.6 percent higher, respectively, than at control sites. Those numbers might seem to suggest that employees at the wellness-promoting sites were healthier, but researchers found that was not the case. In fact, the researchers found that workplace wellness programs had no significant impact on 27 other self-reported health and behavior markers, such as perceived quality of sleep. Clinically measurable health outcomes, including blood pressure and body mass index, also were unchanged. What's more, the programs did not reduce employees' use of healthcare services, including prescription medication, testing and doctor's visits. The wellness programs also had no impact on absenteeism, job performance or length of employment. Despite the results, the researchers caution that it's not time to kick workplace wellness to the curb. Previous research that suggested such programs were much more effective were based on observational studies. The new research, along with a smaller-scale randomized controlled trial of similar design, are important first steps in a more rigorous approach to understanding how to promote health in the workplace. The study appears today in JAMA, along with an editorial on the need to reconsider the role, design and expectations of workplace wellness programs.