Will Polio Be the Second Disease Eradicated From the World? 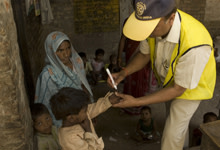 In an effort to make polio the second infectious disease wiped off the face of the planet, a group of charities and governments has pledged $630 million over five years to bolster vaccination efforts. The new cash infusion is spearheaded by the Bill and Melinda Gates Foundation, which committed $255 million, with Rotary International and the governments of Germany and the United Kingdom promising the rest of the money. Public health officials point hopefully to the example of smallpox, which was eradicated in 1980 after an unprecedented global campaign, but the recent statistics on polio show

how tricky and expensive the endgame can be to eliminate a disease.... The polio vaccine was first created in the 1950s and the disease was quickly killed off in the U.S. and many parts of the world. Strong gains against polio continued through the 1990s but an uptick last year in the number of reported cases has health officials and donors concerned that it could re-infect parts of the world [The Wall Street Journal].

More than $6 billion has already been spent on the battle against polio, which is organized by the World Health Organization. Its

global polio initiative, a mammoth programme involving the vaccination of billions of children, has reduced the number of polio cases by 99% since it's launch in 1988, from an estimated 350,000 cases in 125 countries to just 1,600 last year [Nature News].

But although the campaign has eliminated the crippling disease from more than 100 countries, stubborn pockets of polio remain in four countries: Afghanistan, Pakistan, India, and Nigeria.

The African nation has been the site of several recent outbreaks, including last year. In 2003, rumors spread that polio vaccination was a Western plot to sterilize Muslim girls [The Seattle Times].

The polio virus is spread by sewage-tainted water and it can invade the nervous system, leading to paralysis, weakened limbs, and sometimes even death.

An analysis in the Lancet medical journal two years ago found eliminating polio would be cheaper than containing it, because even small drops in vaccination levels could lead to large outbreaks. In a speech to Rotary International, Mr Gates said: "The harsh mathematics of polio makes it clear: we cannot maintain a level of 1,000 to 2,000 cases a year. Either we eradicate polio, or we return to the days of tens of thousands of cases per year" [BBC News].

Related Content: 80beats: “Affliction With Little Dragons” Could Be the First Eradicated Human Parasite DISCOVER: Vigil for a Doomed Virus narrates the end of the smallpox virus DISCOVER: Can We Wipe Out Disease? DISCOVER: Polio Resurfaces in West Africa