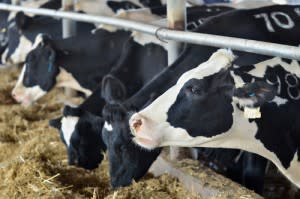 A phrase like "mad cow" is sure to whip up a media frenzy. When the USDA confirmed last week the first case of bovine spongiform encephalopathy

(BSE) in six years, news headlines were splashed with reports of "mad cow disease," the informal and scarily evocative term for BSE. What got lost in these initial reports is that this case of BSE involves a different protein than previous epidemics in Europe, and there's no evidence that this type is transmissible to humans. Nature News has a solid and thorough explanation

of the science behind this case of BSE, known as L-type. As it happens in nature, mutations arise spontaneously, and L-type BSE is caused by a spontaneous mutation in a particular protein. A lot is still unknown about L-type, but we have never seen it spread through cow populations (or jump to humans) through ingestion. Previous BSE epidemics in Europe were spread by the admittedly gruesome practice of grinding up leftover cow parts and feeding them back to cows, but this has been long banned in the United States because of BSE. Critics have argued that there may still be indirect sources of cow protein in feed

(cow protein is fed to chickens, and poultry leftovers go back into cow feed), so more stringent regulations are needed. While those critiques are valid, this case of BSE at least reveals the testing system in the US is not entirely broken. Philip Yam at Scientific American

crunches the numbers on why we should expect to see occasional cases of BSE, and why the fact we haven't seen more cases is a good thing.

According to the USDA’s livestock slaughter summary report (pdf) of April 2012, 34.1 million cattle were slaughtered last year, and 8.7 percent were dairy cows (which typically end up as ground beef rather than as steaks). According to the paper by Brown and his colleagues, about 10 percent of sporadic human cases occur in middle-aged individuals whose cattle-equivalent age is about seven to 13 years, when dairy cows typically face slaughter. (In contrast, beef cattle are usually killed before they reach two years old.) So that means about 0.3 sporadic cases of BSE (or 34.1 million x 0.087 x 0.10, divided by one million) can be expected to occur each year, or one every three to four years. That’s a very low rate. And even if a couple of slaughtered dairy cows with sporadic BSE slipped into our food supply over the past 10 years, the risk of contracting the human form of the illness is extraordinarily low. At the height of the European mad cow epidemic, when millions of people unwittingly ate risky beef, only 222 became infected and developed vCJD since surveillance began in 1990. (Three others got sick via blood transfusions from asymptomatic donors.) A theorized second wave of human cases, based on genetic profiles, has not materialized—and at this point, given that so much time has passed, probably never will.

We've only seen isolated cases of L-type BSE, which probably means they aren't spreading through the food supply. Of course, if a new form of BSE comes along is easily transmissible, then we would right to be concerned. It hasn't yet, but it also means we should keep up the testing.