Why the Meat We Eat Is an Antibiotic-Resistance Threat

Overuse of these medicines in livestock can affect humans, too. 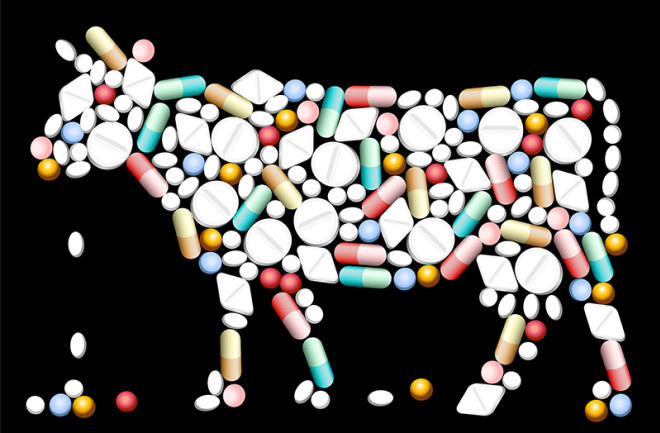 If you’re buying a pack of ground turkey in the meat aisle, you might already know what to check for: Meat that’s priced well, looks fresh and isn’t past its expiration date. But what you might not consider are that these turkeys may have consumed antibiotics and that this could affect you.

Excess use of antibiotics in livestock — and in humans — fuels antibiotic resistance: the process by which bacteria evolve to outsmart our best weapons against them. These bacteria are sometimes known as superbugs, which, despite their sci-fi nickname, are a very real threat to human health.

These bacteria can spread to humans from animals and cause illnesses that become increasingly hard to treat over time. According to a review study from 2017, drug-resistant infections kill 23,000 Americans each year — and society's antibiotic practices are largely to blame.

Animal antibiotic use and how much it contributes to the problem of drug resistance is still debated, especially in the U.S. But organizations like the World Health Organization (WHO), the U.S. Food and Drug Administration (FDA), and the American Veterinary Medical Association have acknowledged the need for responsible antibiotic use in livestock.

And dozens of studies support the link between animal antibiotic use and drug-resistant infections that could make people sick. Countries like Sweden and Denmark began taking concrete steps to curb the use of non-medical antibiotics in animal agriculture as far back as the 1980s. In 2006, the European Union banned the use of animal antibiotics for growth purposes. It took until 2017 for the U.S. to do the same — and there are still problems that remain.

Antibiotics are medicines that either kill or slow the growth of bacteria that give you an infection: think strep throat, whooping cough, or urinary tract infections. They target a bacteria’s DNA, RNA or other parts of the cell, but they don’t work on viruses, like SARS-CoV-2.

Animals take many of the same kinds of antibiotics as humans do. Antibiotics that share the same active components for use in humans and animals are known by the FDA as “medically important.” Food producers raise livestock like cows, hogs, chickens, turkeys for slaughter and treat them with antibiotics when they become sick.

But animals that aren’t sick may also be consuming antibiotics in their feed and water, which can help accelerate the emergence of bacteria that can resist medicine in humans. According to one estimate by the Natural Resources Defense Council, two-thirds of all the medically important antibiotics sold in the U.S. go to livestock.

At its most basic level, antibiotic resistance is a product of natural selection that makes it harder to kill dangerous microbes. When an antibiotic is given to an animal or human, it kills or slows the growth of bacteria, and the infection can stop. But because even medicines aren’t perfect, a few bacteria will remain — the ones that could withstand the effects.

These few bacteria reproduce, passing along their genetic info to create more super-bacteria just like them. As these more resilient bacteria reproduce, a superbug so powerful could emerge that no new antibiotic we use against it would work. “You may end up with a bacteria that's no longer treatable with the existing antibiotic and is essentially resistant to all antibiotics that we have available,” says David Hyun, senior officer at the Pew Charitable Trust’s Antibiotic Resistance Project, “and that's sort of that worst case scenario that we're trying to avoid.” Pew is a nonprofit that conducts analysis on public policy issues, including antibiotic resistance, and encourages policy around the development of new antibiotics.

Until 2017, U.S. farmers could give animals antibiotics to make animals grow faster or gain weight. This practice has advantages for farmers, who can bring their meat to market faster. In an effort to limit antibiotic use to medical treatment, the FDA released guidance in 2013 that effectively phased out antibiotics in animal feed and water to promote growth.

But antibiotics can still be used to prevent disease in animals. “There's all kinds of real or made-up justifications for routine disease prevention,” says Lance Price, co-director of George Washington University’s Antibiotic Resistance Action Center, “and then the way the dosing is described, it is, in some cases, exactly like growth promotion. So it's low doses every day, indefinitely.”

Organizations including the World Health Organization recommend minimizing both this practice and administering antibiotics to promote growth, because treating animals before they get sick contributes to antibiotic resistance.

How Antibiotic-Resistant Bugs Could Reach You

The presence of antibiotics in animal tissue that becomes food isn’t what experts are most concerned about — although it’s not out of the question, and meat and poultry products are routinely tested for residue. The bigger problem is the potential for antibiotic-resistant microbes, which can transfer to humans by coming into contact with animal feces. In concentrated animal feeding operations or factory farms — where most of the animals we eat are raised — a number of factors can contribute to the spread of bacteria, including close quarters, temperature, ventilation and cleaning practices.

“If you were going to design some sort of system for developing drug-resistant bacteria,” Price says, “packing hundreds and thousands of animals together and then feeding them low doses of antibiotics while they're walking around on each other's poo is probably a good system.” Runoff from these operations also can contaminate the water of nearby communities or affect people who work with animals disproportionately.

These antibiotic-resistant bugs can be passed from an animal to their human handlers, in some cases, who can then spread it to other people. But they can also end up being spread during the process of slaughtering or processing. Meat sold in stores often contains some fecal contamination, which can make people sick if improperly cooked.

Organizations that back agricultural interests typically maintain that the industry’s use of antibiotics is appropriate — and that the FDA’s supervision ensures this. “No, it does not put consumers at risk,” says a representative from the International Food Information Council, for example, said in an email to Discover. “For each approved pharmaceutical, the FDA reviews and approves the route(s) of administration (in water, in feed or by injection), the particular species for which it can be used and the specific diseases that the antibiotic should be used to treat.” The International Food Information Council is a trade group funded by the food, beverage, and agricultural industries.

How to Slow Antibiotic Resistance

Stronger government policies curbing excess antibiotics use and the development of new antibiotics would likely slow the rise of resistant bacteria. In the meantime, shoppers can reduce risk by choosing meat with a label of “no antibiotics ever” — meaning that an animal never consumed antibiotics in their lifetime. And as far as meat goes, chicken is a safer bet. Chicken producers have significantly reduced their antibiotic use, with a 62 percent reduction in sales of antimicrobial drugs for chickens from 2016-2019, according to an FDA report. To reduce risk, consumers can also make sure they cook meat thoroughly to kill pathogens and follow safe food-handling principles.

But in the end, the effort is simply delaying the inevitable. “All antibiotic use will increase the risk and drive the emergence of antibiotic resistance,” says Hyun. “So the goal of antibiotic stewardship ... is really to try to preserve the effectiveness of the antibiotics that we do have available right now as long as we can.”