Why race will matter after we all get our full sequences 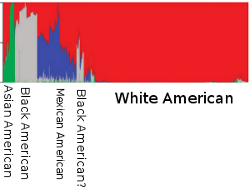 In my post"Health care costs and ancestry", a commenter says:

“Race” is a concept that should have died with disco. I imagine it will soon be feasible for every patient to have their genome analysis included in their medical file and the various risk and other pertinent factors explicated.

The chart to the left shows how race is a social construct. It's a bar plot which partitions ancestry, and as you can see, the Asian children are a mix of European and Asian. How does that happen? Because in 1980 the US Census included people of South Asian origin as "Asian Americans." In contrast, those of Middle Eastern origin remain "non-Hispanic white" (this not totally crazy, think Ralph Nader or Marlo Thomas). But it means that an ethnic Baloch from Pakistan is "Asian," and an ethnic Baloch from Iran is a "non-Hispanic white." Only a government bureaucrat would be happy with this situation. Obvious more fine-grained genomic analyses are necessary at least to force us to acknowledge the stupidity of these bureaucratic quirks. I am chagrined to realize that I've put "Asian" as my race quite often on medical related forms (or, my parents have done so), when the reality is that my genetic background is very distinctive from someone who is from East Asia (and, West Asia). But, this more detailed look at a genomic sequence does not necessarily obviate the need for higher level categories, such as race. One might conceive of a genotype as conferring a set of transparent risks contingent upon a particular variant at a specific location. But by and large we've run into limits in this endeavor. And even when we know much more, there will likely be subtle interactions and networks which will simply not fall out of a raw sequence. That's because populations have histories, and their identity as members of a population is telling you something about that aggregate history. That history shapes a "genetic background," the sum total of genotypes across the genome, in which a specific genetic variant expresses itself. For example, the ancestors of Amerindians were isolated from the populations of Eurasia, Africa, and Oceania, for at least 10,000 years. Their genomes today are then the outcome in part of this particular special history. When genomics becomes like physics (or perhaps more accurately the physics of linear systems?) history will not matter. Until then, history will matter. Classification will matter. More generally, that is why taxonomy matters in biology so much. Phylogenetic relationships are "information for free."