Fruits and veggies provide us with powerful compounds called polyphenols that influence the body’s inner rhythms. They could someday deliver innovative treatments for conditions like cancer and diabetes. 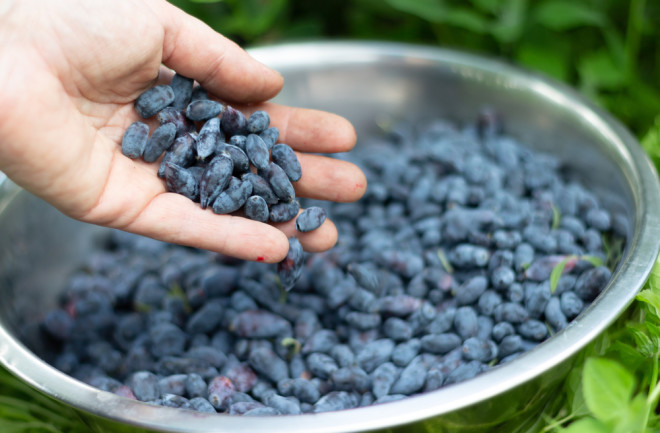 The haskap berry has attracted scientists' attention due to its relatively high concentrations of antioxidants. (Credit: Kreminska/Shutterstock)

Unlike many animals, plants can’t get up and walk, slither or fly away from threats. So when faced with stressors like drought, pests and ultraviolet radiation, they’ve evolved natural weapons to keep on thriving. And when fresh produce ends up on our plates, we benefit from that flora's attempts to fight for its life.

While it’s logical to assume that facing such perils would diminish plants’ nutritional quality for human consumption, the xenohormesis theory proposes the opposite: Essentially, researchers have found that what doesn’t kill plants likely makes them stronger — and fills them with compounds called secondary metabolites that benefit us as consumers. Among these secondary metabolites are vitamins and polyphenols. The latter famously end up in wine via the grapes that produce them, along with plenty of other fresh foods. Overall, scientists have recorded over 8,000 different types of polyphenolic compounds.

Interestingly, plant species tend to exhibit different responses to the same stressors: For example, drought has been found to reduce phenolic concentration in a type of tea leaves and cherry tomatoes, yet increase phenolic content in cumin seeds. These levels ultimately depend on a myriad of factors, such as local temperatures and sunlight exposure.

When people incorporate sufficient levels of polyphenol-rich plant foods into their diets, it’s thought that these antioxidants can counter excessive levels of free radicals. These unstable molecules can cause oxidative stress and damage critical molecules like DNA, RNA and proteins. Such damage can cause common non-infectious diseases like cancer, hypertension, Parkinson’s and diabetes, which are among the leading causes of U.S. deaths.

After we munch on certain kinds of produce, polyphenols are usually absorbed through the colon or small intestine and sent to various organs and tissues, depending on the polyphenol type and its unique chemical structure. Polyphenols eventually interact with specific enzymes or receptors and can aid in vital biological mechanisms: For example, they have been reported to support the P53 protein, also called the "guardian of the genome," in suppressing tumor growth. Additionally, studies have observed how these chemicals can influence microRNAs (mRNAs) that regulate genes involved in processes like brain function, cardiovascular disease and cancer progression.

And as we age or experience immune-weakening diseases like COVID-19, the body's built-in defense system against oxidative stress and chronic inflammation loses some effectiveness. That weakening means that dietary polyphenols can provide a helpful boost, particularly for older or immunocompromised individuals, says H.P. Vasantha Rupasinghe, a food biochemist at Dalhousie University in Nova Scotia, Canada. He's also investigated these antioxidants’ role in preventing and treating certain diseases, including cancer.

Overall, a balanced diet should include both energy-providing nutrients like protein and micronutrients like vitamins and minerals, Rupasinghe notes. Meanwhile, bioactive compounds like polyphenols don’t affect one’s metabolism or growth; but they do help stave off chronic diseases. “You can consider polyphenols even as lifespan-extending dietary components because with less non-communicable diseases, someone can live longer,” he says. “They are very unique dietary components.”

Eating on the Clock

Despite the wide-ranging evidence behind these beneficial plant-derived compounds, it still matters how (and when) you consume them. People should ideally eat local, in-season fruits and vegetables to get the most out of polyphenols, says Manuel Suárez, a biochemist at the Universitat Rovira i Virgili in Tarragona, Spain. Experiments on animal models suggest that eating fruits in season confers stronger antioxidant effects than when consumed out of season, says Anna Arola Arnal, a fellow biochemist at Universitat Rovira i Virgili who frequently collaborates with Suárez. While this finding isn’t yet conclusive, it lines up with our evolutionary history of dining on local, seasonal food that enabled ancient humans to synchronize with their environments and aid survival.

But industrialization has distanced us from our ancestral habits. As of this past February, imports comprised almost two-thirds of fresh fruit and nearly a third of fresh veggies consumed in the U.S, according to USDA data analyzed by the University of California, Davis. “With all the [modern] changes in food patterns, we’re consuming foods from different seasons and not our own,” Suárez says. “This can induce misalignment between the host organism and the plants that are consumed.”

Why some foods may throw us out of whack: Humans run on both circadian (daily) and circannual (yearly) biorhythms based on the Earth’s rotation. This allows us to efficiently utilize energy in our local contexts. Following the direction of certain genes, a central biological clock in the brain aligns each of the body’s individual cell timers with the planet’s light cycle. So if you live in New York and eat a banana sourced from Ecuador in the dead of winter, your body will likely know something’s up.

In addition to other critical processes, the circadian rhythm propels the human microbiome to change throughout the day. In the colon, polyphenols are processed by gut microbes — whose composition and function can fluctuate within a matter of hours. This means that some foods may offer optimal advantages based on the time they’re eaten, Arola Arnal and Suárez proposed in a July 2021 paper in Trends in Food Science & Technology. And on an annual scale, for example, we tend to need higher amounts of antioxidants in winter to survive low temperatures and other environmental stressors.

Overall, some scientists think that eating the appropriate food at the appropriate times could even sync up circadian rhythms that are disrupted by today’s disorderly lifestyle. You can think of it as a two-way street: Food components like polyphenols and various nutrients can influence our inner rhythms, but these timers can also dictate their absorption and effectiveness.

Given the various factors that can hinder how people process polyphenols, including health status and genetics, researchers are now seeking strategies to amp up their circulation within the body and tackle diseases like cancer that currently require safer, more successful treatments. Rupasinghe suggests nanotechnology as a possible solution: When enclosed in tiny particles, polyphenols like quercetin (which is naturally found in red wine and green tea) may ramp up the efficacy of potential cancer treatments. Such techniques could dictate the specific cells that these compounds target (a widely acknowledged weakness associated with chemotherapy and a major source of side effects) and determine when they’re released within these cells.

Some teams have looked into combining conventional chemotherapy drugs with polyphenols to reduce toxicity and improve their efficacy. Scientists have also engineered polyphenols to enhance their anticancer properties. Much of this cancer research, along with treatments for conditions such as Parkinson’s, diabetes and hepatitis B, has been performed in cell models and animals, so we’re still a ways away from possible widespread use.

The same goes for broader work on the complex interactions between plants, the environment and our bodies — it’s far easier to simulate different external forces on lab animals that impact their internal rhythms, including light and temperature, than on human subjects. To that end, Arola Arnal and Suarez hope to find biomarkers — precise measurements within the body, which can pop up in fluids like blood — that can indicate whether people are aligned with their surroundings. “Before jumping to humans we need to have more information in animal models,” Arola Arnal says. “We are just starting with this kind of research and experiments and have a lot to do.”

Despite the unknowns, Rupasinghe stresses the importance of disease prevention via diet. While he devotes some of his research toward future treatment options for various illnesses, his work also highlights how some powerful foods may reduce the occurrence of disease in the first place. Rupasinghe’s 2020 Molecules study, for example, suggested that a fruit called haskap berry might mitigate lung cancer risk in high-risk populations like smokers. And while neurodegenerative diseases continue to challenge scientists, some works indicate that polyphenols could help us maintain cognitive function as we age. “We have very strong evidence for prevention, and this scientific knowledge needs to go to the public,” he says.