Why Do Onions Make Us Cry? 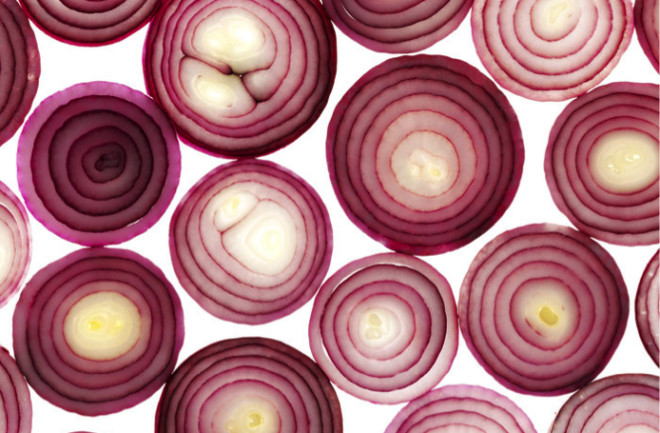 We all know that feeling: the burning sensation as we slice into a fresh onion, eyes watering and wincing to relieve the stinging. There are claims that home remedies can solve this problem, including burning a candle, putting the onion in the freezer before chopping, or cutting the onion underwater. In this article we will investigate the culprit behind our onion tears and a possible scientific resolution that has emerged in the 21^st century. The teary-eyed response to cutting an onion is due to the chemical syn-propanethial-S-oxide, which the onion has evolved as a defense mechanism against predators. Each cell inside the onion contains a vacuole filled with enzymes [1] called allinases that convert amino acid sulfoxides that are present in the onion cell to sulfenic acids [2] (namely 1-propenyl-L-cysteine sulphoxide, or PRENSCO)[3]; these are then transformed by another enzyme into syn-propanethial-S-oxide [4] (Fig 1).When the onion cell structure is broken during chopping, the enzymes are released and are then able to interact with other chemicals inside the onion cell, thus catalyzing the chemical reactions that produce syn-propanethial-S-oxide [1] (Fig 1).

Figure 1. Reaction mechanism for the formation of syn-propanethial-S-oxide. (Burnham, P.M. (1996))

The strong, spicy odor that onions emit when chopped are surprisingly not the culprit chemical that makes your eyes water. This odor is formed by the condensation of syn-propanethial-S-oxide to form odorous thiosulfanates [2]. Because syn-propanethial-S-oxide is a volatile sulfur compound, it easily diffuses into the air [1]. Your cornea contains nerves that relay information to the larger nerves responsible for touch, temperature, and pain detection on your face [2]. The nerves on your cornea detect the presence of syn-propanethial-S-oxide and send the signal to your central nervous system (Fig 2), which then stimulate the autonomic nerve fibers on the lachrymal glands to produce tears [2] in order to dilute the syn-propanethial-S-oxide. This is why referred to as lachrymatory compound or lachrymator, which can be defined as “an irritant that causes the eyes to fill with tears without damaging them” [5].

Figure 2. The lachrymal response (Tiwari, S., Ali, M.J., and Vemuganti, G.K. (2014)/ScienceDirect) Whereas previously it was thought that a generic allinase could produce syn-propanethial-S-oxide, recent research has shown that it is synthesized by a specific enzyme called ‘lachrymatory factor synthase’ [3]. In fact, scientists succeeded in producing onions in 2015 with suppressed lachrymatory-factor synthase genes that contained 7.5 times less syn-propanethial-S-oxide as well as eliminated the lachrymatory response among sensory panelists [6]. Additionally, scientists have found that when they mixed only generic allinases and PRENSCO in vitro, the production of thiosulphinate – the chemical responsible for onion’s flavor - increased [3]. No more tears & more flavor? Sounds like a tasty treat we would be down for! References Cited: