Why Dehydration Can Turn Deadly for Seniors

As people age they often lose their ability to “feel” thirst. That's a problem, particularly during heatwaves. 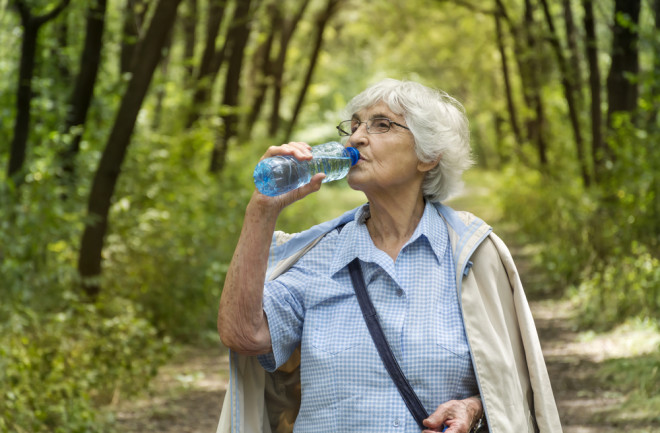 During a 2003 heatwave in Europe, over 70,000 people died — most from dehydration. An overwhelming number of these individuals were older adults, in their 70s, 80s and 90s, many of whom lived alone. Gary Egan, a scientist previously affiliated with Melbourne’s Howard Florey Institute, wanted to figure out why some people with access to water could possibly die of dehydration.

His thirst study, a collaboration with the Research Imaging Center at the University of Texas, suggests that people over the age of 65 actually underestimate how thirsty they are. That’s because, at a certain age, humans lose the sensations that ‘tell them' to hydrate.

Specifically, Egan’s research shows older adults lose their ability to feel thirst because their brains no longer communicate optimally with their bodies. Without a working signal to do so, many seniors, especially those who live alone, simply don’t drink enough water. Egan and his research partners believe that’s what happened in Europe nearly 20 years ago when a significant number of older adults died in the 3-week heatwave.

In the experiment, published in Proceedings of the National Academy of Sciences, researchers induced thirst in two categories of subjects — people in their 20s versus those in their late 60s and early 70s — by directing each group to drink salty water. Afterward, all the subjects were allowed to drink as much plain water as they wanted. “Although all participants had the same level of thirst, the older people only drank half as much water as the younger subjects," said study co-author Michael Farrell in a press release. "Using PET imaging we found in the older people, the mid-cingulate cortex was 'turned off' much earlier … This discovery helps explain why the elderly can become easily dehydrated.”

The lack of internal motivation to hydrate is exacerbated by two additional factors: To begin with, older adults have less water in their bodies than younger people; and several medications increase the risk of dehydration.

Chronic Underhydration in the Elderly

Water takes on many jobs in the body, from regulating temperature to helping pump blood to muscles. That’s why dehydration can lead to disorientation and confusion, fatigue and muscle cramps, and even worse consequences. But these “nonspecific” ailments are often misdiagnosed and even chalked up to the natural effects of aging, Anne Vanderbilt, a clinical nurse specialist  at the Cleveland Clinic’s Center for Geriatric Medicine told the Cleveland Clinic.

As it turns out, up to 40% of elderly people may be chronically underhydrated, a SAGE Open Nursing study from 2019 notes. Lead author Janet Mentes mentioned in a press release that seniors who are underhydrated and exposed to a virus or bacteria are more likely to develop an infection, such as urinary tract infections, pneumonia or other respiratory diseases. If they are treated for the infection, a clinician may not recognize any underlying underhydration and miss the opportunity to educate the individual about proper fluid intake. In fact, there are “significant deficiencies in hydration health literacy among elderly,” as reported in a 2017 Nutrition and Healthy Aging study.

Dehydration even ranks among the ten most common diagnoses in hospital admissions of elderly people, a 2016 Frontiers in Molecular Biosciences paper found. Further, health issues caused by dehydration accounted for a 5% increase in preventable emergency room visits in adults between 2008 and 2012, costs 1.14 billion dollars a year in the U.S., and results in increased mortality and morbidity.

Unlike the now-debunked broad recommendation to drink 8 glasses of water a day, the National Council on Aging suggests a more specific rule: Individuals should calculate one-third of their body weight and drink that number of ounces in fluids, taking into account how some of that water will come from the food we eat. Foods with high water content include watermelon, zucchini and strawberries.

Geriatricians know it’s hard for an 80- or 90-year old to drink a full glass of water in one sitting: Bloating and frequent bathroom trips commonly derail most older individuals off the hydration path. Further, research has determined that worries of overnight incontinence leave many older adults waking up dehydrated, which is linked to an increased fall risk. To address these concerns, Vanderbilt suggests offering elderly individuals small sips of water throughout the day and mixing water with flavoring to make it more palatable.