Why brown people are different shades of brown.... 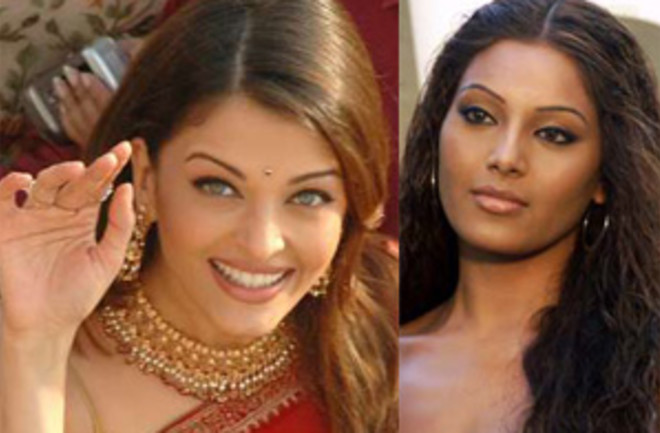 Why are brown people so many shades of brown? If you were raised in a South Asian family I'm sure that you've had to deal with the "color" issue somehow. This isn't a cultural blog, so I'm not going to go there, but I do think that the salience of complexion in South Asian culture makes this new paper, A genome-wide association study of skin pigmentation in a South Asian population (PDF), of more than passing interest. If you plotted a frequency distribution of skin reflectances of South Asians within 2 standard deviations from the median you would see a range from brunette white from nearly black skin. Even eliminating the confounding factor of environment (upper class South Asians often are at great pains to prevent the exposure of their skin to sunlight so that it can stay as light as possible, an option that rural peasants don't generally have), the question is why such a diverse range?. First, the Indian subcontinent is a subcontinent. From the northwest to the southeast you have a diversity of peoples which is second only to Africa (this is often born out by studies of neutral markers). Over the past few thousand years there have been many newcomers to the subcontinent, as evidenced by the languages (Indo-Europeans from the northwest) or lifestyles (rice agriculture from the northeast). It is therefore a common explanation that the variation in complexion in South Asia is a function of ancestry. The lighter skinned populations tend to cluster in the northwest and amongst the upper castes, and these are the groups with the greatest levels of exogenous genetic input (note that there is a great overlap here!). That being said, neutral markers seem to imply that about 90% of the ancestry of South Asians is indigenous at least to the threshold of 10,000 years before the present. In plainer language 9 out of 10 ancestors of any given South Asian was probably a resident of the Indian subcontinent 10,000 years ago. The balance of the ancestry is of course not trivial. It seems likely that the 1 out of 10 ancestors that were exogenous made significant contributions to South Asian culture, from the Indo-Aryan (and likely Dravidian) languages to the Islamic religion which 1 out of 3 South Asians are members of. The story of lactase persistence also suggests that the genetic contribution of that 1 out of 10 was also very significant in driving recent adaptations. But in any case, the studies of skin pigmentation allows us to go beyond folk biology and explore the genetic architecture of this trait. Here is the major section of the abstract:

...Polymorphisms in three genes, SLC24A5, TYR and SLC45A2, yielded highly significant replicated associations with skin reflectance measurements, an indirect measure of melanin content in the skin. The associations detected in these three genes, in an additive manner, collectively account for a large fraction of the natural variation of skin pigmentation in a South Asian population....

My previous posts about skin color imply that the variation on this trait in our species is due to a bit less than half a dozen genes of large effect which operate in an additive and independent manner. To give a concrete example, 25-40% of the between population difference in average complexion between Europeans and Africans can be attributed to a polymorphism on SLC24A5. But, since the frequencies of the alleles are disjoint (Africans tend to be fixed for one variant and Europeans for another) SLC24A5 can not explain the within population variance (e.g., the differences between males and females across populations are not due to genetic differences as much as the relationship between sex hormones and the melanin regulatory pathways). One of the interesting findings of the genomics of skin color is that different populations have achieved the same phenotypic state via alternative architectures. For example, Europeans and East Asians seem to have arrived at fair skin through different genetic means. Additionally, the evolution of very light skin also seems to be relatively recent. The spread of mutant varieties which result in fairness seems to post-date the Ice Age; e.g., SLC24A5 and the blue-eye variant of OCA2 both began to rise in frequency within the last 10,000 years. So what's going on with South Asians? The study is pretty simple in concept, the authors were looking to see variations of allele frequencies that tracked skin color differences. They used source populations of Punjabis, Gujaratis, Bangladeshis and Sri Lankans. These groups exhibit different mean skin colors and obviously have distinct evolutionary histories so they tried to account for population substructure to eliminate spurious correlations. The short of is that they found what they were looking for, the genes which they found to have a large effect were the ones you would expect from previous studies of Europeans, Asians and Africans. Interestingly, SLC24A5 plays a large role here. The same SNP which accounted for 25-40% of the variance between Africans and Europeans accounted for over 30% of the variance between the lightest and darked quintiles of skin color. In other words, there was a sharp difference in the frequency of the SNP rs1426654 between the lightest and darkest 20% of their pooled sample, 49% of the light-skinned group carried the rs1426654 which is fixed in Europeans while only 10% of the dark-skinned group did. When I went and looked for previous reports of this SNP that included South Asians I found the following: South Asians, N=87 derived = 0.820 (fixed in Europe) ancestral = 0.180 (fixed in Africa and East Asian) The frequency of the derived allele seems a bit high, and is higher than that reported above. There might be some issues with the population selected in this case, but in any case, the bigger picture is this:

South Asians carry an allele of SLC24A5 which has been sweeping across various Eurasian and North African populations for the past 10,000 years due to very powerful selective forces

(selection coefficients on the order of 10%). Whether the frequency within South Asia is 30% or 80%, the major point is that this is a new variant which likely has its origins in northwest Eurasia (it is fixed in Europe). I am skeptical that migration can explain this, just as I am skeptical that migration can explain the high rates of lactase persistence. In African Americans the frequency of SLC24A5 alleles maps almost perfectly onto independent estimates of admixture of European and African ancestry. But this was a recent hybridization event; my own hunch is that the high frequencies of SLC24A5 are the result of selection within the last 10,000 years in South Asia, just as they were in Europe, the Middle East and North Africa. On a broader evolutionary canvass I think the fact that the three loci which were smoked out by this association study as being implicated in skin color variance also play the same role in Europe is something that has to be considered as part of a bigger picture. As I note above South Asians seem to be predominantly indigenous to the subcontinent on the time scale of Ice Ages. So are Europeans, the preponderance of the evidence is that 3 out of 4 ancestors of modern Europeans were resident on the continent of Europe at the end of the last Ice Age (the frequency of Neolithic farmers as local contributions of ancestry declines in a southeast to northwest cline). In terms of neutral markers South Asians are an outgroup to Middle Eastern & European populations, and share a common ancestry during the Ice Age (a non-trivial, but minority, contribution from West Asia within the last 10,000 years is confirmed of course). Nevertheless, despite this distant relationship

there seems a pattern on a subset of functional loci (skin color, lactase persistence, etc.) that many disparate West Eurasian and North African populations have been subject to the same evolutionary processes with the rise of agriculture

. In contrast, East Asians seem to have been genetically more isolated from these dynamics, as evidenced by their independent evolutionary adaptations (in the case of skin color, convergence, in the case of lactase persistence a totally alternative phenotype). This maps onto the pattern of cultural evolution since the rise of civilization depicted in William H. McNiel's marcohistory The Human Web. Though the Indian subcontinent was a distinct cultural hearth in relation to the West, broadly inclusive of the Middle East and Europe, it was far more connected than China to a broader Eurasian cultural network early on (there was almost certainly trade between Sumer and the Indus Valley civilization). This was of course a function of geography, the border between India and the rest of West Eurasia is relatively porous, as evidenced by the diffusion of genes and cultural ideas (Buddhism to the West, Islam to the East). In contrast, China was a civilization apart until recently; with independent philosophical and political traditions only dimly impacted by "Western" (which is often conflated with Indian because of Buddhism!) developments. In sum, patterns of cultural diffusion and exchange may serve as a good guide toward the overall spread of functionally salient alleles across Eurasia over the last 10,000 years. Genes are culture not only coevolved, but likely were subject to parallel constraints and adaptive landscapes.