Why Are 90% of Asian Schoolchildren Nearsighted? From Doing What You're Doing Now 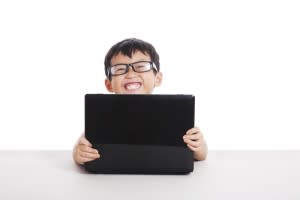 With glasses, contacts, and LASIK surgery, most of us nearsightedness folks don't have to worry about squinting at the blackboard anymore. But the sheer prevalence of nearsightedness, or myopia, among Asian schoolchildren (in Singapore, China, Taiwan, Hong Kong, Japan, and Korea) is stunning: 80 to 90% according to a recent review

in the journal Lancet. In comparison, that number is just 20 to 30% in the UK. Myopia has also been on the rise in both Asia and Europe over the past few years. While there are genes linked to myopia, its rising prevalence in both continents points to environmental causes. Namely, kids are spending more time hunched over screens and books instead of playing outdoors. In myopia, light coming into the eye can no longer focus at the retina because the eyeball has become too long. A body of research in humans and animals suggest that reading at close distances and lack of bright sunlight could cause elongated eyeballs. In Singapore, myopia has shot up in the last 30 years among all three major ethnic groups---Chinese, Indian, and Malay---which highly suggests a environmental cause. Singaporean schoolchildren who read more than two books per week were also more likely to have myopia. How one reads physically, may have an impact too: ultra-orthodox Jewish boys, who study the Torah

intensely and at a close distance while swaying

have higher myopia numbers than the girls, who don't. A study on students of Chinese ancestry in the Singapore and Australia has also found correlations between among of time spent outdoors and lower rates of myopia. Together, these observational studies suggest that high myopia rates in Asian schoolchildren are likely related to their intense educational systems. 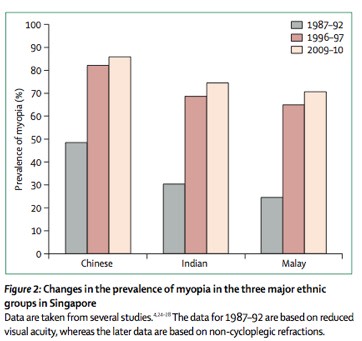 Animal studies provide some clue into why bright sunlight could actually protect eyes from myopia. While UV rays in sunlight is harmful, the unique intensity of non-UV light from the sun stimulates dopamine release, which affects eye growth according to studies in chicks

. A recent study in tree shrews

suggest that especially bright fluorescent lights could stave off myopia too. So for people trying to avoid glasses (but that's totally geek chic now, right?), going outside could be a bright idea. Just don't be squinting at your phone the whole time. [via TIME