Why Another COVID-19 Surge Could Devastate U.S. Hospitals

Despite hospitals' plans for another potential spike, pandemic-induced trauma has contributed to significant staffing shortages. 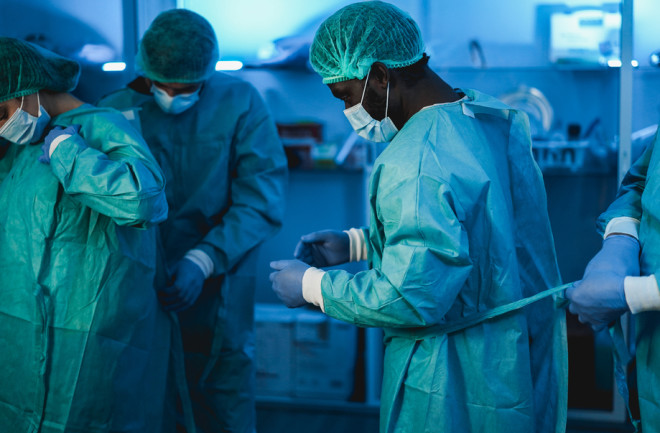 During the worst months of the pandemic, intensive care nurse Scott Brickner would sit by COVID-19 patients as they took their last breaths.  “I never allow a patient of mine to die alone. Ever,” says Brickner, who works at a large university hospital in Los Angeles.

Brickner witnessed death daily in the surge that began in November 2020. Most of his patients were placed on ventilators, and few improved. “The hard part wasn’t necessarily just death — death would have been a respite for some of these patients," he says. "Instead, you were watching these patients cycle through a terrible thing.

His department typically treated 30 patients simultaneously pre-pandemic, but he saw as many as 80 during the rise in cases. Brickner says he felt exhausted and defeated. He describes a four-month period in which his workplace felt like a war zone.

Like many nurses, Brickner doesn’t know if he could handle another COVID-19 surge. Amid the spring 2021 jump in hospitalizations, 30 percent of health care workers said they considered leaving the profession, according to a poll by the Washington Post and the Kaiser Family Foundation.

Although many hospitals have publicized their plans in case of another major wave, staffing issues could disrupt these care plans.

For one, employees are still recovering from unprecedented stress. More than half of ICU and ER nurses say they are “emotionally unhealthy,” according to a new study by the American Nurses Foundation. In fact, over a third of 26,174 health care workers surveyed this past March and April reported PTSD symptoms, according to a CDC report.

Now, industry leaders worry pandemic-induced trauma will worsen staffing shortages. On September 1, the American Nurses Association sent a letter to the head of Health & Human Services and asked the federal department to address the shortage by, for example, working to increase salaries.

Florida emerged from its latest surge in mid-September, and the state's staffing crisis remains critical. Around seventy percent of hospitals report they will encounter a staffing shortage within the next week, according to the Florida Hospital Association.

“Every hospital has a surge plan, whether that’s because of pandemic or, because we’re in Florida, hurricanes or natural disasters. So we all have surge plans that allow our hospitals to surge their capacity as needed,” says Marc Lotter, who serves as senior vice president of communications, marketing and education at the Florida Hospital Association.

When hospitals expand intensive care units, they do so by converting other spaces. Nurses and physicians who normally work in other departments are then tapped to provide ICU care. But in hospitals with broader staffing shortages, temporary nurses are hired to fill the gap. “In some cases you bring in contracted staff, like nurses, from temporary staffing agencies at a very, very high price,” Lotter says.

Still, this is nothing new: Staffing agencies have been filling employment gaps for years. Prior to the pandemic, studies estimated the stress of nursing caused turnover rates as high as 37 percent in some parts of the country.

Nurses have also had to work overtime to ensure surge coverage: Brickner says he worked 16-hour days during the pandemic and usually totaled 60 hours per week. His hospital tried to help employees by ordering pizza for lunch or promoting free counseling sessions. A donor even supplied massage chairs for the break room. But Brickner says he didn’t even have time for any of the morale boosters.

Without workplace support, Brickner says he’s been forced to find a therapist on his own and hopes other nurses do the same. Yet therapy can't fully address the broader systemic chaos. “It’s really beating us down. I think there will be a mass exodus of nurses,” he says.  “If we continue or continue down this path, if we have a surge again, I don’t know if I can keep being a nurse.”