Why a Healthy 70-Year-Old Had Trouble Swallowing

He was losing weight, energy and the ability to drink and eat. Why? 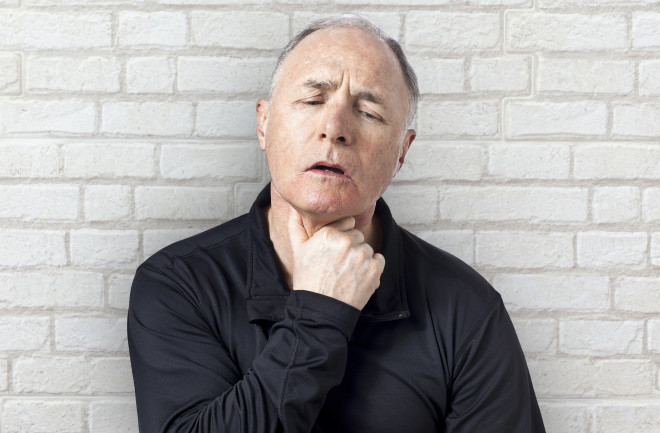 Richard came to my clinic with a common complaint: difficulty swallowing food.

At first, he had trouble only with large bites. But now, even small bites and drinks were causing him problems. The 70-year-old attorney often felt like he was choking.

For most of his life, Richard exercised regularly and was fit, but over the past year, he had lost weight and energy. “Maybe I’m just getting older,” he told me, “but I feel like I am having a lot more troubles than I used to.”

Having problems swallowing is common. The act requires a complex coordination between the mouth, tongue and esophagus. Various muscles need to work in the right way at the right time to allow food to go from your dinner table to your stomach and not get stuck midway or inhaled into a lung.

The medical term for difficulty swallowing is dysphagia. Some people have trouble with liquids, others with solids. Some, like Richard, struggle with both. The condition can be caused by an obstruction, such as a tumor in the esophagus, or because the muscles of the esophagus are not contracting in a coordinated manner.

As I talked to Richard, several alarms went off in my head. His combined symptoms of weight loss and dysphagia, especially in someone his age, are a red flag for an esophagus tumor. When cancerous, it is extremely difficult to treat, even with the most aggressive methods.

Esophageal tumors usually block the passage of food, but liquids can still pass into the stomach. Still, Richard was having problems swallowing both food and drink, which more often is associated with impaired or abnormal muscular contractions of the esophagus, known as motility disorders.

I pressed Richard about his symptoms. Looking embarrassed, he told me something even his wife didn’t know: After a night of sleep, Richard, on several occasions, had awakened with chewed-up food on his pillow. He would clean it up quickly before his wife or anyone else saw it. He was essentially regurgitating as he slept.

I scheduled Richard for an endoscopic exam, in which I would use a special flexible camera — an endoscope — to peer down his esophagus. If there was a tumor there, I could biopsy it. If I encountered his esophagus narrowing, I could insert a special hollow balloon that would stretch the passage open, and when removed it would allow food to pass through to the stomach. It all depended on what I saw.

During the exam, and with Richard sedated, I was surprised to find that his esophagus did not narrow. Instead, it was more than three times as wide as a normal esophagus, with chewed food piled at the bottom. But I was glad to see no tumor.

The combination of Richard’s dysphagia and dilated esophagus suggested a rare diagnosis: achalasia.

A normal esophagus has a ring-shaped bundle of muscles, known as a sphincter, at its top and bottom. During a swallow, these muscles relax and contract to allow food to enter the esophagus and exit at the bottom into the stomach.

However, in patients with achalasia, the nerves don’t work right. The lower part of Richard’s esophagus wasn’t opening, so food was piling up and fermenting. Regurgitation, as Richard was doing in his sleep, cleared the passage.

Patients have several treatment options, all designed to keep the lower esophagus open. One involves inserting and inflating that special hollow balloon, and another involves injecting Botox (the same agent used by plastic surgeons to treat skin wrinkles) to relax the lower sphincter so it doesn’t close. A permanent fix is to cut the lower esophageal sphincter muscles.

Richard was about to leave on a weeklong business trip, so we scheduled an appointment two weeks out to discuss which procedure he preferred.

When Richard arrived for the appointment, I noticed his fresh, dark tan. During his business trip to Panama, he told me, he sunbathed and took long walks on the beach. This caught my attention.

“How often do you go to Panama?” I asked.

“All the time,” he said. “I have a lot of business interests down there.”

“Do you ever get a lot of bug bites on your trips?” I asked.

“So many I stop counting,” he said, laughing.

“Do you sleep under a net to keep away insects at night?” I asked.

He laughed again. “Not at the cheap hotels I stay at down there.”

“Do you at least use bug repellent?”

Richard’s story took on a new dimension. In most patients diagnosed with achalasia, a cause is never found. There is, however, a well-known connection between Central America and the disorder.

Panama, like many other parts of Central America, is home to tropical parasites, most notably Trypanosoma cruzi, which causes Chagas disease. Insects spread the disease by biting humans. It can cause fevers and weakness, although some people show no symptoms. A chronic infection can lead to deadly heart problems.

Chagas disease can also cause achalasia by damaging nerves along the esophagus.

I had Richard’s blood checked, and the test came back positive for T. cruzi. Given his many trips to Panama, he might have been infected several times.

His complaints of weakness had me worried he had developed heart problems. But a cardiac ultrasound showed his heart was healthy.

A number of tropical insects, including the kissing bug above, can infect unwary tourists with Trypanosoma cruzi, a parasite that causes Chagas disease. (Credit: Steve Gschmeissner/Science Source)

I prescribed antibiotic medicine to treat any ongoing infection. But the damage to his esophagus was already done, and he still needed treatment.

Richard selected endoscopic Botox injections, which would require maintenance injections every few months. Several days later, I performed the procedure, and in less than a week, Richard was swallowing better. His energy was also returning, and he began putting on weight.

Now that Richard knew the cause of his swallowing problems, he cut back dramatically on his trips to Central America. When there, he used bug spray, slept under nets and took other preventive measures.

Most physicians advise patients not to tan deeply, but in Richard’s case, it led to my pinpointing the cause of his condition. Given the disease’s ability to eventually damage the heart, his tan might have indirectly saved his life.

Douglas G. Adler is a professor in the Department of Internal Medicine at the University of Utah School of Medicine. The cases described in Vital Signs are real, but names and certain details have been changed. This story originally appeared in print as "Hard to Swallow."