Why 98.6 Degrees? Our Body Temperature Strikes a Perfect Balance 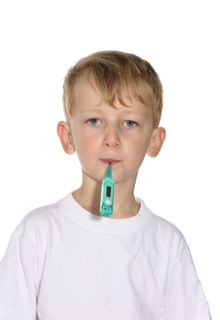 Standard human body temperature is 98.6 degrees Fahrenheit: It's one of those numbers from grade school science textbooks—like 65 million years since the dinosaur extinction or nine eight planets in the solar system—that just gets stuck in your head. But why should it be that balmy temperature and no other? According to a study by researchers at Albert Einstein College of Medicine, the 98-degree range is in perfect balance.

Every one degree Celsius rise in body temperature wards off about 6 percent more fungal species. So tens of thousands of fungi can infect reptiles and amphibians, but we can only be invaded by a few hundred fungi. In the new work, the researchers created a mathematical model that weighed the fungal protection benefits versus the metabolic cost of high body temperature. And the optimal temperature was 98.1, quite close to what evolution figured out. [Scientific American]

The reason for mammals' hot body temperatures had been an open question, the scientists say. According to study coauthor Aviv Bergman and colleagues, while most mammals keep an inside temperature of about 98 Fahrenheit [37 Celsius], most other animals have considerably lower body temperatures. As a result, the researchers say, mammals must spend more time eating to bring in energy. However, there may be thousands of species of fungus

that can infect amphibians, for instance, but can't tolerate the hot temperatures inside our bodies.

"This study is a good example of how mammalian evolution has been driven by both external biological factors and internal physiological constraints," said Dr. Bergman. [Press release]

Their study appears in the journal mBio. Related Content: 80beats: Study: Gene May Make You Drunk Faster, But Could Stave Off Alcoholism, Too

80beats: Do All Organisms Burn Energy at Approximately the Same Rate?

DISCOVER: The Biology of Cryogenics