We have been remiss in not addressing the major event going on right before our eyes: the NBA Finals. In my case, it's literally before my eyes, as I live just a couple of blocks from the Staples Center in LA, where action resumes tonight. I fully expect to run into Jack Nicholson drinking himself into a stupor at a local bar later this evening. 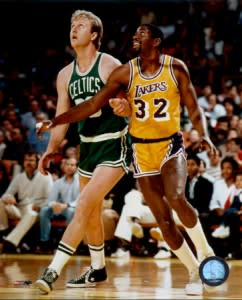 Now, every year the NBA Finals are a momentous event, but this year is especially noteworthy, as the teams involved are the LA Lakers and the Boston Celtics -- a remarkable 11th Finals rematch between these two franchises. However, to a Philadelphia 76ers fan such as myself, one needs to say "the Hated Lakers" and "the Hated Celtics." One or the other of these evil organizations has been responsible for bouncing my beloved Sixers out of the playoffs on countless occasions, most recently in 2001 when a Lakers juggernaut led by Shaquille O'Neal made short work of a plucky Philadelphia squad led by Allen Iverson -- a David vs. Goliath matchup in which Goliath won fairly easily, as seems to usually happen in the real world. So the question of "who to root for?" becomes one of "who do you hate less?" A truly thorny issue. Points to be considered:

In the final calculation, and as painful as it is to say out loud -- one has to root for the Celtics. Emotional attachment to a sports franchise is ultimately a completely irrational feeling, arising from unpredictable factors of geography and history rather than a sober contemplation of objective criteria. So you have to go with your gut, and my gut would very much like to see Kevin Garnett finally win the NBA Championship he so richly deserves. We'll have to put aside the ugly reality that he'll be wearing one of those horrible green uniforms when he does it. And wait until next year.