Who is more comfortable pooping in public: men or women? (The answer may surprise you.) 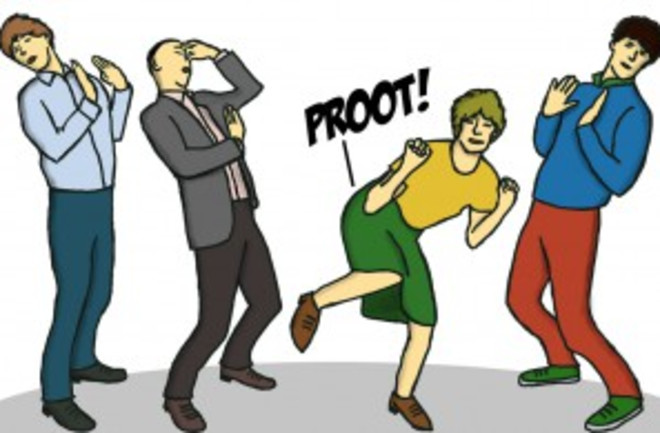 Image: Flickr/Matti MattilaEveryone farts...but some of us are more comfortable blatantly cutting the cheese in public. Here, researchers studying fecal habitus--the part of our culture that involves farting and pooping--calculated the differences between men's and women's feelings about letting it rip in front of others. It probably comes as no surprise that men are more comfortable farting in public than women. However, these craptastic scientists went a step further, asking how men and women feel about being overheard while pooping. It turns out this depends on who the eavesdropper is (see Table 3, below, for a fantastic breakdown based on sex, sexual orientation, and relationships); people are generally OK with having their spouses listen to them poop, but a crush is another matter. But not everyone is as bothered--non-heterosexual women are apparently the most at ease with this, even more so than straight men. And boy, are people willing to go the extra mile to avoid being overheard on the throne: "Some persons controlled their sphincter muscles to let out gas or excrement slowly, thus decreasing the sound of their bowel movement. One heterosexual man stated: 'If it is going to be loud, I would stop and go, meaning let it out in intervals so it would not be a big kerplunk sound'. Other techniques to prevent people from hearing included having a bowel movement early in the morning or late at night, going upstairs if people are downstairs (or vice versa), doing it as fast as you can, pulling out the toilet paper roll to make a cover-up noise, turning the fan on, and not using public restrooms at all.'" Fecal Matters: Habitus, Embodiments, and Deviance. "This article examines fecal matters—namely, the social concerns that can accompany defecation and flatulence. Researching 172 university students, we show how aspects of the socio-cultural context as “embodied” in four groups of participants (heterosexual women and men and non-heterosexual women and men) mediate the operation of the “fecal habitus”—that part of culture that interprets and organizes fecal events. The study finds that the heterosexual women and the non-heterosexual men show the greatest commitment to the habitus and the heterosexual men the least. It provides some evidence that the non-heterosexual women also show a decreased commitment. Theoretical contributions show how the concept of embodiment can highlight everyday “social problems prevention work” by paying attention to the role of the different senses, the emotional components involved in bodily mishaps, gender discrimination and the privileging of male status, and the elaboration of stigma theory."

Related content: NCBI ROFL: Pooping while lying down is not as easy as you might think. NCBI ROFL: Rectal salami. NCBI ROFL: What your poop looks like can tell you how long it’s been inside.