White Noise is the Newest Sleep Fad. But Can Playing It Really Help You Sleep?

White noise may be able to mask noise pollution, but researchers are still searching for answers about how it might impact your quality of sleep. 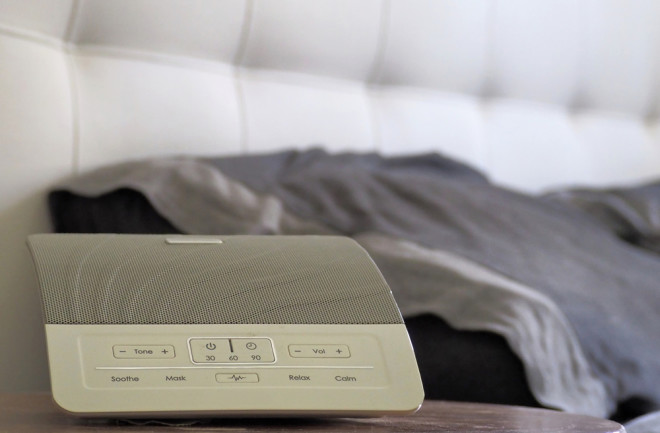 One third of adults in the U.S. say they don’t get the recommended seven hours of sleep per night. In one survey, nearly two-thirds of participants said they play music to help them sleep. Others swear by leaving the television on or using smartphone apps or machines to play white noise to help them sleep.

White noise is created by overlaying sounds of many frequencies at similar intensities. When combined, the sound is reminiscent of a running air conditioner, or television static. While huge numbers of people claim that some sort of sound — be it music, television or white noise — helps them fall and stay asleep at night, scientists say the evidence is limited. That said, researchers agree that it can drown out other, more intrusive sounds that might otherwise wake someone up. And that’s enough for some scientists to use sound in their own bedrooms.

Any sudden noise can wake a person up in the middle of the night. That’s because our brains are constantly monitoring our surroundings for potential threats, even when we sleep. Even if they don’t wake us up all the way, sounds can interrupt a deeper phase of sleep — and nudge our brains into a lighter sleep state. While people can’t necessarily tell how often their deep sleep was interrupted overnight, when it happens frequently they may report feeling less rested in the morning.

But it’s harder to hear these sudden, disruptive noises when there’s sound playing in the background that can mask them. Random noise, like white noise, seems to be particularly suited to this purpose. That’s the main idea behind using them to help people sleep, says Orfeu Buxton, a sleep researcher at Penn State, who listens to background noise at night to muffle the sound of his 10-pound dog barking, as well as any other potentially startling sounds. “[Background noise] can cover up other noises that are short and sharp.”

Theoretically, music or television can also mask sudden noises; the problem is that they can also create them. Buxton explains that the volume may suddenly change throughout the night when commercials come on or as songs and shows start and end.

Still, there may be some benefits to playing music, at least early in the night to help you fall asleep. Roneil Malkani, a Northwestern Medicine sleep medicine physician, says “you can think of the music affecting relaxation [and] your mood. Those are the things it can potentially improve.”

Many researchers — and companies — are currently experimenting with ways to manipulate background noise to increase the amount of time people spend in deep sleep. While people probably won’t know how long they spent in a given state of sleep each night, Buxton says “the more deep sleep you have, generally, the more restorative it will have felt.”

Buxton and his lab have been teaming up with industry partners to develop apps that can harness the power of noise to enhance sleep quality. Earlier this month, the team published a study showing that playing pink noise — noise that made up from sounds of many frequencies but with slightly greater intensity from those in the lower frequencies — in a strategic, pulsing manner could increase the proportion of time a person spent in deep sleep.

Margueax Gray a researcher in Buxton’s lab and the lead author on the study, says that in addition to improving sleep-enhancing technologies, she’s hoping the work will help “disassemble what it is about particular sounds that might be enhancing or disruptive,” to sleep.

Malkani, who uses noise to help both him and his children sleep, has done similar research, timing short bursts of pink noise in hopes of increasing an individual’s slow wave sleep. Since this type of deep sleep is associated with memory, he says, “if we can enhance the slow wave sleep, maybe we can improve memory function.” In his 2019 study, nine patients with mild cognitive impairment performed better on memory tests after sleeping with the specially-timed pink noise.

But these studies have been small — both had fewer than 10 participants — and required that sounds be strategically timed throughout the night. For noise played continuously, Buxton says there’s still “not a ton of strong evidence that having white noise on the whole night helps, but tons of people swear by it. And it’s a billion-dollar industry of apps and devices.”