Where in the world did anatomically modern humans come from?

The Pith: I review a recent paper which argues for a southern African origin of modern humanity. I argue that the statistical inference shouldn't be trusted as the final word. This paper reinforces previously known facts, but does not add much that both novel and robust.

I have now read the paper which I expressed a touch of skepticism toward yesterday. Do note, I did not dispute the validity of their results. They seem eminently plausible. I was simply skeptical that we could, with any level of robustness, claim that anatomically modern humans arose in southern vs. eastern, or western, Africa. If I had to bet, my rank order would be southern ~ eastern > western. But my confidence in my assessment is very low. First things first. You should read the whole paper, since someone paid for it to be open access. Second, much props to whoever decided to put their original SNP data online. I've already pulled it down, and sent off emails to Zack, David, and Dienekes. There are some northern African populations which allow us to expand beyond the Mozabites, though unfortunately there are only 55,000 SNPs in that case (I haven't merged the data, so I don't know how much will remain after combining with HapMap or HGDP data set). The abstract:

Why would hunter-gatherers have so much diversity? The historical and ethnographic data here are clear: it is not that hunter-gatherers are particularly diverse, but that descendants of farming populations tend to be less diverse, and most of the world's population are descendants of farmers. To give a classic example, ~30,000 Puritans and fellow travelers who arrived in the 1630s to New England gave rise to ~700,000 New Englanders in 1790. This is a growth by a factor of 3 to 4 per generation. And, this does not include the substantial back migration to England during the 1650s, as well as the fact that there was already spillover of New Englanders to other regions of the American colonies in the 17th and 18th centuries (e.g., eastern Long Island was dominated by New Englanders). 30,000 is not small enough to constitute a bottleneck genetically, but one can imagine much smaller founding populations rapidly compounding as agriculturalists push their way through ecologically constraining bottlenecks. 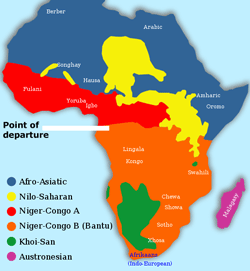 For Africa we have a good candidate for this phenomenon:

. This rise of African farmers began around the region of eastern Nigeria and Cameroon ~ 3,000 years ago. It swept east, toward the lakes of eastern Africa, and down along the Atlantic coast toward modern day Angola. Between 1,000 and 2,000 years ago in its broad outlines the expansion had crested, reaching its limit in southern Africa, where the climatic regime was not favorable for their tropical agricultural toolkit (e.g., the Cape region has a Mediterranean climate). Here you still have the hunter-gatherer Bushmen, and other Khoisan groups such as the Nama, who practiced animal husbandry. By and large this expansion seems to have resulted in a great deal of biological replacement of previous peoples. South African Bantu speakers, such as Desmond Tutu, share more with Nigerians genetically than they do with the nearby Bushmen, though there has been some admixture on the frontier among Xhosa. As I have stated, most of this paper elicits little objection from me. The major issue that I do take objection to is the inference that these results indicate the likelihood of southern, not eastern, Africa, being the origin of anatomically modern humanity. The authors do point out that many of the hallmarks of modern humanity have their earliest dates in southern, not eastern, Africa. That does add to the plausibility of their overall case, and I would be curious as to the opinion of someone more versed in the material culture and fossil remains to weigh in. But that's where we started, not where we are, assuming that their specific contribution to the model does push it forward. So I'll focus on the genetic data. Here's the point which seems tendentious to me:

If you've calculated regressions, you know that this can be quite the art. They are sensitive to various assumptions, as well as the data you throw into them. They're dumb algorithms, so they'll give you a result, even if it doesn't always make sense. To really understand why I remain moderately skeptical of the inference in this paper, you need to look at figure 2B. I've reedited a bit for style. Also, some of the groups were so obscure that even I didn't know them, so I just put in their nation. 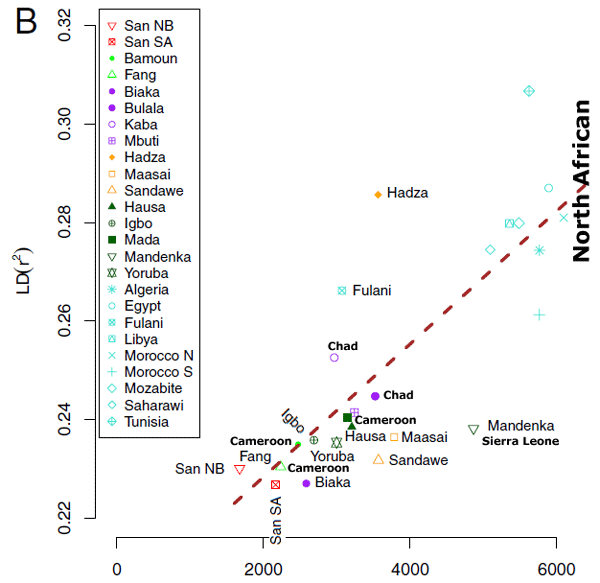 On the y axis is linkage disequilibrium. Basically, population bottlenecks, and admixture events, along with localized selective sweeps, can elevate this statistic. The LD statistic for non-African populations is invariably higher than for African ones, and the further away, the higher the value. On the x axis is the distance from their inferred point of origin of the human expansion in south-eastern Africa. The Hadza seem to have gone through a recent bottleneck (or, are going through it now) according to other measures in the paper, so no surprise that they're deviated above the trend line. The other hunter-gatherer groups, the Bushmen and Pygmies (Namibian and South African Bushmen, the the Biaka from western Congo and the Mbuti from the east of that nation) have low LD values, consistent with relatively stable and deep time histories for the populations, when viewed as a coherent whole (all humans have equally ancient lineages, but coherent populations can be older, or younger, depending on how you view them). My main issue is this: once you remove the non-Sub-Saharan African populations the trend line is far less stark. The Fang, who are a Bantu group near the point of origin of that language family, have nearly the same LD as some of the hunter-gatherer groups. The Mandenka, in far western Africa, have elevated LD vis-a-vis hunter-gatherers, but not nearly so much as the groups with more "northern" admixture (e.g., the Fulani). The moral of the story here is to not just rely on the final numbers generated by statistical methods, which can be quite of a large magnitude, but look at the figures and try to make sense of them. Overall, I would say that this paper presents many interesting results, but the most robust look to be confirming what we know previously, rather than increasing the probability of a novel locus for the point of origin of modern humans (though the southern origin already gains some support from archaeology). Citation: