When scared, baby roller birds vomit in your general direction. 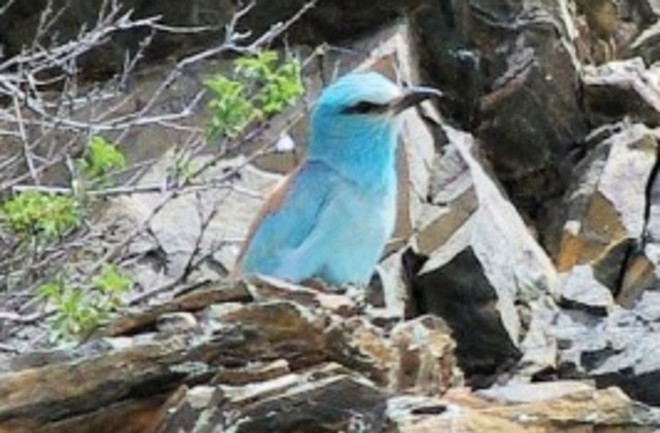 Photo: flickr/Ken and NyettaMost baby birds are pretty helpless - they basically just sit in their nest and hope that predators don't find them. Eurasian rollers, however, are more proactive: when scared, they vomit an orange liquid, which has been hypothesized to serve as a defense against predators. Here, the researchers tested this hypothesis by analyzing the chemical composition of the vomit and testing whether it actually deters predators. They found that the vomit contains several defensive compounds derived from the birds' food (plants and grasshoppers), and these compounds make the vomit distasteful to predators (represented here by dogs, who, as we know, don't necessarily find vomit distasteful in general). Does this remind anyone else of Jurassic Park?Armed Rollers: Does Nestling’s Vomit Function as a Defence against Predators? "Chemical defences against predators are widespread in the animal kingdom although have been seldom reported in birds. Here, we investigate the possibility that the orange liquid that nestlings of an insectivorous bird, the Eurasian roller (Coracias garrulus), expel when scared at their nests acts as a chemical defence against predators. We studied the diet of nestling rollers and vomit origin, its chemical composition and deterrent effect on a mammal generalist predator. We also hypothesized that nestling rollers, as their main prey (i.e. grasshoppers) do from plants, could sequester chemicals from their prey for their use. Grasshoppers, that also regurgitate when facing to a threat, store the harmful substances used by plants to defend themselves against herbivores. We found that nestling rollers only vomit after being grasped and moved. The production of vomit depended on food consumption and the vomit contained two deterrent chemicals (hydroxycinnamic and hydroxybenzoic acids) stored by grasshoppers and used by plants to diminish herbivory, suggesting that they originate from the rollers’ prey. Finally, we showed for the first time that the oral secretion of a vertebrate had a deterrent effect on a model predator because vomit of nestling rollers made meat distasteful to dogs. These results support the idea that the vomit of nestling rollers is a chemical defence against predators."

Related content: NCBI ROFL: The vomiting of the shrew.