Puerto Rico has a problem: a population of rabies-infected mongooses. The small American territory reports that 40% of its mongoose population has been exposed to the deadly rabies virus, and just last month the CDC published the first known case of rabies transmission by mongoose bite. On November 30th, 2015, a 54-year old man from southeastern Puerto Rico was admitted to a local emergency room with a strange constellation of symptoms.(1) Fever, cough, and chest tightness pointed to a respiratory illness, but his other symptoms, including tingling in his hand, drooling, and an inability to eat and drink for the previous five days, suggested otherwise. He was tentatively diagnosed with a lower respiratory tract infection and given antibiotics as well as antiemetics to address his nausea. Both a chest x-ray and computed tomography scan of his head, however, yielded no clues as to the nature of his unusual illness.

A small Indian mongoose. Image: Chung Bill Bill. Click for source. The following morning he left the hospital against the advice of his physicians but returned the same afternoon as his symptoms persisted. The report from the CDC does not elaborate on how exactly his clinical status worsened but does note that his wife, now accompanying him to the emergency room, was reporting that he had been bitten by a mongoose while performing chores around a chicken coop on his property two months prior, in the first week of October. This new piece of information about a possible animal exposure aroused the suspicion of rabies. The report does not elaborate on the series of events that led to his admission to the intensive care unit (ICU). However, en route to the ICU, he suffered a cardiac arrest and died. An autopsy conducted in the following days confirmed infection with the Caribbean mongoose variant of the rabies virus. This unfortunate gentlemen represents the first known case of rabies infection directly transmitted by the bite of a mongoose in the United States and its associated territories. The West Indian mongoose (Herpestes auropunctatus) is a small, sleek animal with a fox-like face. A 1952 article on a small outbreak of mongoose rabies among farm animals on the island charmingly described the animal as "an extraordinarily wily animal, its ferocity only matched by its speed of movement."(2) An opportunistic eater, the mongoose preys on insects, lizards, snakes, rodents, and poultry, but he will also nosh on fruits and plants as mood and necessity dictate. Native to India, the mongoose was intentionally imported to the Caribbean and Pacific islands in the 1870s as part of an effort on the part of the sugar industry there to eradicate the rodents that were plaguing cane plantations and causing severe economic losses.(3) This plan, both experimental and rather uninformed, backfired, as such importations are wont to do, all the more so due to the face that the mongoose is a diurnal animal and rests in dens during the night, the rat a nocturnal one. The rodent population suffered no losses, though the same could not be said of the domesticated poultry population. Just twenty years after the introduction of the mongoose, it officially became an agricultural pest, one that proved difficult to control via hunting and poisoning efforts. The introduction of this non-native predator yielded further unforeseen consequences. The mongoose's indiscriminate diet resulted, over the following century and a half, in the extinction of many species of ground-nesting birds, reptiles, and amphibians. In Hawaii, the mongoose currently threatens eight endangered birds due to its habit of feasting on eggs and chicks.(4) In 1999, it was estimated that the animal causes 50 million dollars of damage annually due to the “killing of poultry in Puerto Rico and Hawaii, extinctions of amphibians and reptiles, and destruction of native birds.”(5) Perhaps far more troubling has been the emergence of the mongoose as a major reservoir and vector for the deadly rabies virus. In the United States, the rabies reservoir is maintained by wild populations of skunks, raccoons, and foxes. Puerto Rico is an exception. A study by the U.S. Department of Agriculture estimates that 40% of mongooses in Puerto Rico have been exposed to rabies and comprise over 75% of all reported cases of animal rabies, posing a significant public health threat to Puerto Ricans (1)(7). Rabies actively circulates among the Puerto Rican mongoose population and percolates through to other animals residing on the island, predominately affecting canines but also cats, hogs, and cattle. (2)(6) In spite of the extraordinarily high prevalence of mongoose rabies, human infections as a result of a mongoose bite have been rare. Of the 75 mongoose bites recorded in 2014 none proved fatal likely due to the expedient use of post-exposure prophylaxis (PEP) to prevent the invariable progression of this fatal disease.(1) 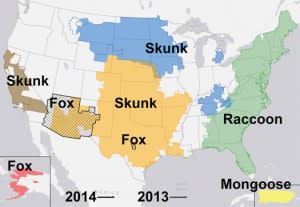 Wildlife reservoirs of rabies in the United States and its territories. Note that the mongoose is the reservoir in Puerto Rico, located in the lower right corner. Image: CDC. Click for source. "Good intentions may do as much harm as malevolence," Aleery Camus writes, "if they lack understanding." The history of mankind's tinkering in the realm of animal habitats and populations offers us countless proofs to this effect. The mongoose in Puerto Rico has evolved from a failed industrial experiment in pest control to a costly plague itself. Whether through the millions of dollars in damages due to the extinction of indigenous species or the threat to human and animal health by rabies transmission, the mongoose is an invasive species par excellence, a dreadful example of the tragedy of introducing non-native species to new lands. More than any other animal in the world, the mongoose has "been introduced intentionally into wild habitats" for the purpose of biological pest control, and today its widespread deleterious effects have earned it the moniker "wildlife's enemy #1."(5) Controlling this wily animal, through trapping programs and rabies vaccination campaigns is a major priority for conservationists and, increasingly, public health officials. Previously on Body HorrorsThe Bestial Virus: The Infectious Origins of Werewolves, Zombies & VampiresCanine Rabies Imported into AmericaReferences 1. A Styczynski et al. (2017) Human Rabies — Puerto Rico, 2015. MMWR Morb Mortal Wkly Rep. 65: 1474-1476 2. ES Tierkel et al. (1952) Mongoose rabies in Puerto Rico. Public Health Rep. 67(3): 274-8 3. CO Everard and JD Everard. (1992) Mongoose rabies in the Caribbean. Ann N Y Acad Sci.16(653): 356-66 4. Hawaii Invasive Species Council. (2017) Mongoose. Accessed online at http://dlnr.hawaii.gov/hisc/info/invasive-species-profiles/mongoose/ on Jan 25, 2017 5. WST Hays and S Conant (2007) Biology and impacts of Pacific island invasive species. 1 A worldwide review of the effects of the small Indian mongoose, Herpestes javanicus. Pacific Science.61(1) :3-16 6. AR Berentsen et al. (2015) Exposure to Rabies in Small Indian Mongooses (Herpestes auropunctatus) from Two Regions in Puerto Rico. J Wildl Dis. 51(4): 896-900