When Eyebrows Collide: Scientists Map the Genetics of Facial Hair 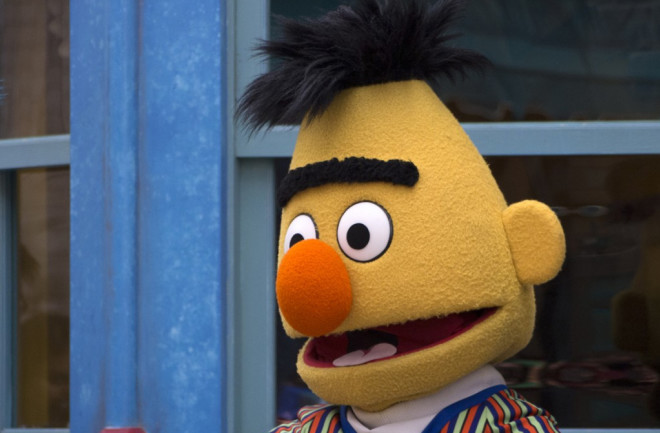 Bert sports one of the more iconic unibrows. (Credit: cactusbeetroot/Flickr)

Hair is a defining feature of our physical appearance, and we put a lot of effort — or no effort at all — into making it a reflection of our personality. Beards are trimmed, gray hairs are dyed and stray hairs are plucked to avoid bridging the gap between eyebrows. But what causes our hair to grow in so many colors, textures and places?

Researchers from University College London conducted a genetic analysis of over 6,000 Latin American men and women in an attempt to match differences in their hair types with markers in their genome. Their analysis included a wide mixture of ancestries, spanning European, Native American and African lineages, to produce a broad sampling of hair characteristics. Based on their findings, researchers believe they’ve pinpointed 18 genetic variations associated with shape, color, balding, beard thickness, eyebrow thickness and synophrys — the “unibrow.”

The team’s results could have implications not only in the beauty industry, but also for investigators trying to build forensic profiles of individuals from DNA evidence.

Researchers performed an assessment of each participant’s scalp and facial hair, focusing on seven categories: curliness, color, balding, graying, beard thickness, eyebrow thickness and synophrys. Then, researchers analyzed a collection of single-nucleotide polymorphisms (SNPs) in participants’ genomes. SNPs act as biological markers and help scientists locate genes that are associated with disease or a specific trait — in this case, it was hair traits.

These investigations, called Genome-Wide Association Studies (GWAS), have grown in popularity due to advances in genetic sequencing. In all, the researchers found 18 areas of the genome that significantly affected hair appearance, including 10 that were completely new. Researchers published their findings Tuesday in the journal Nature Communications.

An overview of the study's findings. At the top are the seven hair features examined in the study, and the lines connect these features with the genetic regions associated with each trait. (Credit: Kaustubh Adhikari, Emiliano Bellini and Andres Ruiz-Linares)

An overview of the study’s findings. At the top are the seven hair features examined in the study, and the lines connect these features with the genetic regions associated with each trait. (Credit: Kaustubh Adhikari, Emiliano Bellini and Andres Ruiz-Linares)

Included among the newly identified genes was one responsible for hair graying, a trait that was previously a genetic mystery. The IRF4 gene is known to help control the production of melanin, which regulates pigmentation in our bodies. While IRF4 had been previously associated with hair coloration, it wasn’t until now that a strong link to graying, the absence of color, was established. The researchers found that a common mutation to the IRF4 gene changes how melanin is synthesized by the body, leading to the gradual loss of color in the hair.

Several other relevant genes emerged from the study as well, including PRSS53, which influences hair curliness; EDAR, which controls beard thickness and hair shape; and FOXL2, responsible for eyebrow thickness. And of special concern to some people — the National Basketball Association’s Anthony Davis in particular — is the PAX3 gene. PAX3 plays a crucial role ensuring that the face and skull form properly during the early stages of development, and has been implicated in several rare genetic developmental disorders. Once its job is done, it still has a meaningful, though decidedly less important, role to play: Researchers found that it was largely accountable for the presence of unibrows.

The full map of the genome as it pertains to hair is still blurry. The physical expression of our genetic information arises from a complex interaction of many genes, and, as with the PAX3 gene, some of them play multiple roles. Indeed, most of the genes that were relevant to hair traits have other jobs as well.

Narrowing down the search for relevant genes opens up our understanding of the human genome, and provides more insight into the genetic code that underlies our appearance. Finding a cure for common cosmetic afflictions such as hair graying and balding is the most immediate use for this newfound knowledge, but it may also serve to better identify suspects in criminal investigations where a DNA sample is available. Knowing which genes code for specific hair traits could help refine algorithms that assemble mugshots based solely on a suspect’s DNA.