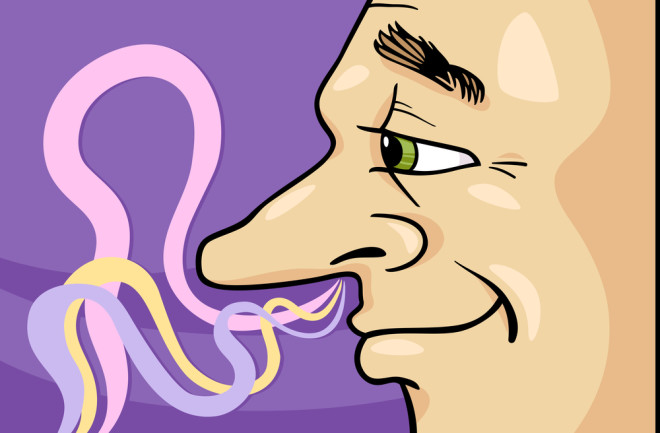 What can a change in our capacity to smell can tell us about our health? (Image credit: Igor Zakowski / shutterstock) I hate the smell of a mall. Everything reeks of that seemingly incurable lust for stuff—‘buy me, buy me’ is the cry. It’s as if the building is overdosing on the smell of money, and perspires that sickly-sweet perfume. You can lick it off the air. But that’s just me—my daughter loves it. It’s not accidental. There are firms who research and provide signature scents for companies like Tommy Hilfiger. Marketplace.org recently reported on this. And if you didn’t know that, consider this: scientific papers have been published that actually test the impact of ambient odors on mall shopper’s emotions, cognition and, wait for it… spending!^1 The authors concluded that the cognitive theory of emotions explains the influence of ambient scent best, and they went on to discuss managerial implications. I guess if LL Bean could manage that I would become more entranced with the idea. Recently, the Smell Experience Project, a citizen science project that tested volunteers for a change in odor perception, published its findings. Imagine that you walked into Macy’s and smelt something like dog vomit, but it was the actual signature scent—you would know that your nose is misleading you—that would be a give-away. Dolores Malaspina, MD the researcher at The Institute for Social and Psychiatric Initiatives who is using this information is particularly interested in what a change in olfaction or odor perception actually tells physicians and psychiatrists. She says, “We have a large amount of publications showing that olfaction is related to symptoms and cognition in schizophrenia and that there are strong sex differences in cases and controls. In the disease we have appreciated olfaction as an indicator of higher cognitive control, in addition to olfactory specific mechanisms and regions. We can use profiles of olfactory function to address the heterogeneity of schizophrenia, that is, to find different subgroups of cases.” Another question that can’t be ignored is whether the deficits in olfactory perception could be a cause of behavioral distress or disorders. To address this question Malaspina and colleagues conducted an Internet based study of 1000 people reporting a change in olfactory function^2. She says the results were intriguing, “They showed that olfactory dysfunction substantially impacts a person’s quality of life, despite being of little concern to treating physicians.” The results show that olfactory stimulation and processing may help maintain a healthy brain, and people who loose their sense of smell may experience emotional consequences. While there may be less practical problems associated with impaired or distorted odor perception than with impairments in visual or auditory perception, many affected individuals report experiencing olfactory dysfunction as a debilitating condition. Smell loss-induced social isolation and smell loss-induced anhedonia (the inability to experience social enjoyment) can severely affect quality of life. I might mention that Discover has published a long list of Malaspina’s work, and she notes that, “Discover was also one of the first magazines to take my findings on paternal age and psychiatric illness seriously. They published this in an article by Josie Glausiusz entitled Seeds of Psychosis in the 2001 edition.” Changes in odor perception can be a symptom of a condition, such as depression, head injury, dementia, or allergies, or a side effect of medication. Because the changes are subjective and difficult to measure, medical professionals often do not ask patients about changes in their sense of smell. As a result, there is little documented information about these changes. With the Smell Experience Project researchers successfully turned to the public for their help to better understand how changes in sense of smell can serve as an important and useful health indicator. References

*** The Smell Experience Project is one of more than 800 projects on SciStarter, an online citizen science hotspot. Use our project finder to search and participate in citizen science that interests you!