When Dieting, Should We Be Fasting Or Grazing?

When and how to eat is the cornerstone of many diets. But the advice often conflicts. 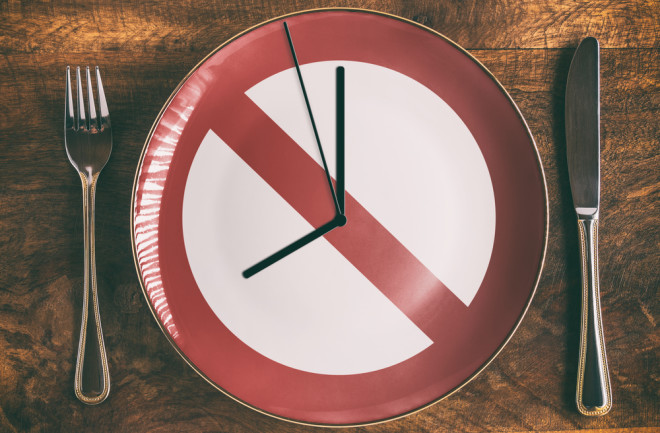 Perhaps nothing unites people — especially Americans — quite like the shared desire to lose a couple of pounds. I’m in this camp as well. I’ve tried and succeeded in losing weight exactly twice in my life. The first time involved a few months of angst-induced calorie-counting, followed by a nasty bout of the stomach flu. Not easily repeatable.

The second time was through a fairly intensive fitness and nutrition program. We were instructed to focus on controlling portion sizes and eat six small meals spaced evenly throughout the day. The program lasted 21 days, and so did my lost weight.

This grazing-style diet — never eating too much at one time but eating often — is fairly common. But recent evidence seems to neatly contradict this line of thinking. Studies point instead to the benefits of intermittent fasting, a strategy that involves restricting the times you eat rather than what or how much you’re eating. You eat only during certain hours, or sometimes, only on certain days. No calorie counting, no anything-counting, no measuring, just obeying the clock. In other words, it’s the exact opposite of the always-nibbling plan.

Which begs the question: Which is it? Should we be grazing or fasting for weight loss? These diametrically opposed diets can’t be equally healthy, can they?

As it turns out, the grazing-style diet should work, but only when you’re also meticulously watching what and how much you’re eating. The result: You consume fewer calories. Decades of research supports cutting calories as an effective weight-loss strategy. Grazing is just one way to pull that off, though it’s not the grazing, per se, that’s doing the job.

Krista Varady, a professor of nutrition at the University of Illinois at Chicago, was compelled by this paradox when she was starting her own research career. “I was studying calorie restriction in humans during my Ph.D. and post-doc,” she says, “and I noticed that people really got sick of it and having to be so vigilant and write everything down.

“I thought, well, do people really have to diet every day to lose weight, or could they maybe diet every other day, and lose the same amount of weight?”

The result was the first ever clinical trial comparing an alternate-day fasting diet to a regular, calorie-restricted diet, which Varady and colleagues published in JAMA in July 2017. For the alternate-day diet, participants ate 25 percent of their energy needs on fast days (around 500 calories) followed by 125 percent of their energy needs the next day (over 2,000 calories.) The calorie-restricted group was prescribed a consistent 1,500 calories per day, on average.

“I thought alternate-day fasting would be easier to stick to, because you basically get a day off of dieting every other day,” Varady says.

The researchers found that the two diets led to the same amount of weight loss. And, the same number of people stuck with the diets in the two groups. It suggests they’re equally easy … or equally hard, depending on whether you’re a glass-half-full type of person.

Another study found a similar result when participants had only two of these fast days per week — a strategy often called a 5:2 fasting diet.

“Basically, we found that fasting is just another way of fooling the body into eating less,” says Varady. “There’s nothing magical about it.”

One of the most popular versions of intermittent fasting is called the 16:8 plan. You eat during an eight-hour window, say, from noon to 8 p.m., and then fast for the other 16. This type of fasting plan is what researchers call “time-restricted eating.”

Emily Manoogian is a researcher at the Salk Institute, where she specializes in circadian rhythms. In her own work, she’s studied a 14:10 plan — eating within a 10-hour window instead of the internet-popular eight. “I don’t think anyone knows for sure what the benefits are between eight or nine versus 10 versus 11 versus 12,” she explains. “More important than picking the one that might have the most robust benefits, we wanted one that was feasible.”

And feasible it was. With no other changes to their diets besides sticking to the 10-hour eating window, participants in her study lost weight and slimmed their waistlines. They lowered their blood pressure and cholesterol. They slept better. What’s more, after the study was over, nearly 70 percent of the participants reported that they were sticking with the diet on their own. Their work was published in Cell Metabolism in December.

Manoogian says that one of the things that sets time-restricted eating, like the 16:8 or 14:10 fasting plans, apart from other strategies like alternate-day fasting is that the consistency taps into your body’s circadian system. For that reason, your eating window shouldn’t be random — you should start it at the same time every day.

“The circadian system is anticipatory, so it needs to know when things are going to happen,” says Manoogian. “When you eat, you’re sending a timing cue to your body, so if you’re sending cues around the clock, you’re confusing all of these clocks, they can’t anticipate, and so it breaks down the ability for you to properly metabolize food.”

“It’s really making you a weaker version of yourself,” says Manoogian.

How to Go on a Diet

So, dear reader, if you’ve read this article looking for diet advice, here it comes.

Varady also points out that although alternate-day fasting is more challenging, it can result in twice as much weight loss as a 16:8 fasting schedule. If you decide to give any type of intermittent fasting a try, know that some people get headaches during that initial adjustment period because they’re not drinking enough water. Intermittent fasting is not recommended for anyone with a history of eating disorders and hasn’t been tested in children or pregnant women.

Manoogian’s time-restricted eating advice is to put your eating window in the middle of your active day and be sure it ends a minimum of two hours before you would normally go to bed.

“The only other thing I’ll say is, it’s completely free; it’s noninvasive,” Manoogian says. “Try a 12-hour eating window if you can’t do shorter. It’s not going to hurt you to eat within 12 hours.

“Because it’s so accessible, it’s really kind of a neat thing for people to be able to try and see for themselves.”