When Biology Refuses to Listen to Medical Logic

Of all the sentences you never want to read from scientists running a study of a promising new medical treatment, high on the list has got to be, "the trial was terminated early for futility." Yet there it is, describing what happened when researchers assessed a surgical procedure that had "slam dunk" written all over it. The idea was to take patients who had complete blockages of the internal carotid artery, which carries blood to the brain, with the not-surprising result that they had insufficient blood flow to the brain. The patients had also had at least one transient ischemic attack (TIA), or "mini-stroke," as a result of blood supply to a part of the brain being temporarily reduced or blocked altogether. Half the patients in the study received standard medical treatment, such as aspirin and other anti-clotting drugs plus anti-hypertension drugs, while the other half got the promising surgery: bypassing the blocked carotid, in the neck, with an artery in the scalp. Surely, went the rationale, steering blood around a blockage would lower the subsequent stroke rate. Expectations were high: leaders of the Carotid Artery Occlusion Surgery Study (COSS) projected that there would be 40 percent fewer strokes on the same side as the blockage in patients who had the surgery. 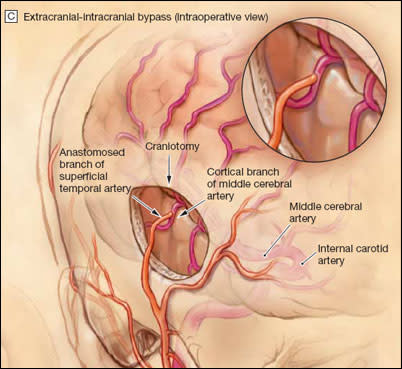 The experimental surgery was nifty but not effective. Courtesy of Powers, et al., and JAMA

Not so much. In yet another example of how human biology continues to thwart what seems like compelling medical logic (more on which below), the 97 patients receiving the surgery had no fewer strokes than the 98 receiving standard medical care, the COSS team reports in the Journal of the American Medical Association

. Things began to go south early. After one month, 14 of the 97 surgery patients had another stroke, compared to 2 of 98 controls. After 2 years, things merely evened out: 20 patients in each group had had a stroke. (A 1985 trial

of the surgery had also shown no benefit, in 808 patients.) At that point, the Data Safety Monitoring Board advised halting the trial, which was done in June 2010. (It seems small comfort that if you survived your first month post-surgery without a stroke, your risk of subsequent stroke fell by about 75 percent.) Bypass, concluded the COSS researchers, "provided no additional benefit over medical therapy for preventing recurrent stroke." If this study gives you déjà vu all over again, join the club. It has many of the hallmarks of other failed interventions. First, a dazzling new technology (PET imaging) allows physicians to see something previously hidden—in this case, where a carotid artery is blocked and that blood flow to part of the brain is cut off. Second, advances in microsurgery made it possible to perform a tricky operation—here, the bypass, using a scalp artery to do an end-run around the blocked carotid. Third, enthusiasts believed strongly that boring old drugs (including boring old olddrugs, such as aspirin) couldn’t hold a candle to the exciting new operation.We have seen this movie before. Cardiac CT scans were supposed to show blocked arteries that threaten to trigger a heart attack, allowing surgeons to do a bypass or angioplasty to prevent that. Yet a large randomized trial

earlier this year failed to show that. The reason seems to be that the big blockages that show up on CT scans are not the ones that cause heart attacks, as everyone assumed: another piece of logic trumped by biology. But disrupting the blockages through surgery "spray[s] a whole lot of debris down into the tiny blood vessels, which can trigger a heart attack or stroke," Nortin Hadler, a professor of medicine at the University of North Carolina, told me

recently. Yet the amazing 3D images that cardiac CT angiography provides almost beg doctors to jump in there and clear out the blockage. Similarly, MRIs have become the go-to diagnostic tool for back pain. But again, they have not improved care, and—since surgery is never without risk—have arguably worsened it. By showing every little abnormality in the spine, they persuade doctors to operate, even without knowing whether their target is the cause of the pain. So many back operations (especially spinal fusions) are so ineffectual that earlier this year the American College of Physicians warned

that routine imaging for back pain does not improve patients’ health. Perhaps the most disappointing case of biology trumping logic has come in cancer, where early detection has proved not to provide the survival benefit that everyone assumed. The failings (and risks) of the PSA test and mammograms need their own post, but two recent studies are here

. Hope springs eternal, however. Lead author William Powers of the University of North Carolina Medical School said this: "With the advances of endovascular or catheter related techniques that have been developed to place stents in the carotid artery, it may be possible to open up blocked blood vessels with a much, much lower stroke risk than the bypass surgery." "May," sure. But let’s keep in mind that several large studies investigating angioplasty, stenting, and/or bypass surgery found that the procedures didn’t improve survival rates or quality of life more than drugs, exercise, and a healthy diet. Logic doesn’t matter to the human body. Figuring out what works requires experiments to validate, or disprove, theory. Other branches of science realized this long ago. It’s long past time for medicine to do so as well.

Sharon Begley is the science columnist and science editor of Newsweek. She is the author of the 2007 book Train Your Mind, Change Your Brain