Something is wreaking havoc on this patient's heart. 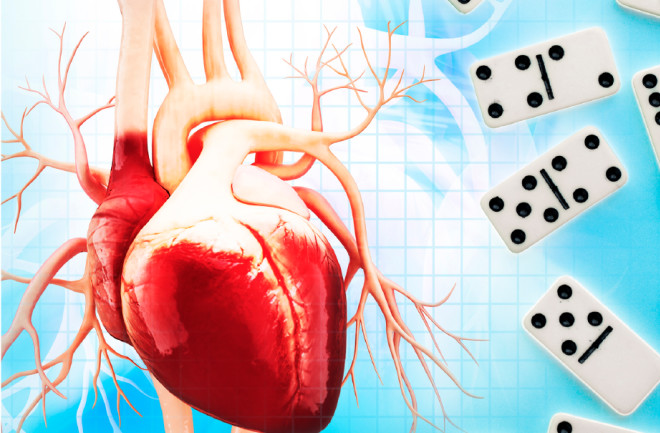 Gloria was 46 years old and healthy when she suddenly crumpled to the floor of her kitchen like an empty potato sack. The paramedics found her in full cardiac arrest. Resuscitated at the scene, she went into cardiac arrest again in the ER and once more in the ICU, where I caught up with her. A cardiologist, pulmonologist and general surgeon were already there.

Anoxic brain injury — oxygen starvation while the heart stops functioning — had left her unresponsive. A breathing tube had been inserted through her mouth into her airway. Her heart rhythm had been restored. Her blood pressure and breathing were being supported. She was stable, for now.

Initial lab results were all over the map. Liver function abnormalities, disordered electrolytes, elevated white blood count — all could be explained by temporary complete lack of blood flow. But I couldn’t pinpoint the underlying cause of this disaster. What had triggered the arrests? What had been the first domino to tip for this woman?

One thing I’d learned as a medical student and have hammered into the heads of my students ever since: The answer lies in the history. “Listen to the patient; they’ll tell you what’s wrong.” But this patient was in no position to tell us anything.

In the ICU waiting room, the specialists and I asked the distraught family members about her health: Prior fainting spells? No. Recent illness? No. Drug use? Yes, but she’d been clean and sober for over a decade, and her toxicology screen came back clear. Family history of sudden death? No. Palpitations, chest pains, breathing problems? No, no and no.

She had had vague upper abdominal discomfort on and off for the last week. Some occasional shoulder pains, too. Not much, but…

A CT scan related to her abdominal pains had shown a possible pocket of air around the site where, 15 years ago, she’d had a gastric bypass operation. This air pocket suggested intestinal contents, including gas, were escaping into her abdominal cavity. Had Gloria somehow perforated her gut? The family acknowledged that she’d been taking ibuprofen, which can cause small holes in the lining of the stomach and is a no-no for people with gastric bypasses. Had bowel contents leaked into her abdomen, leading to shock and now cardiac arrest?

Our surgical consultant wasn’t so sure, pronouncing her abdominal exam “unremarkable.”

“But the air pocket in the CT scan…” we noted.

“The exam was normal,” he assured us. It was a diagnostic dilemma. Which to trust — the scan or the exam? Did she or did she not need an urgent, surgical exploration of her abdomen?

“Code Blue, ICU.” Again, she’d arrested. Electric shock was delivered via pads on her chest and her heart rhythm returned. But a bedside EKG showing Gloria’s heart rhythm revealed new, dramatic changes suggesting a heart attack. The artery feeding the lowermost part of her heart appeared to be blocked.

“She needs to go to the cath lab now,” said the cardiologist. “We need to open that vessel or she’s going to keep arresting.”

“But if there is a leak and we don’t get a drain into her belly, she won’t survive,” the surgeon said. Even though the belly exam had been normal, there might still be serious trouble in the abdomen.

“She’ll never get off the operating table,” warned the cardiologist.

The urgent debate continued: Was there more risk in delaying the procedure that would open the blocked artery or in deferring a surgery to drain the bowel contents (maybe) spilling out of her gut? There was no obvious right answer. The only thing obvious was that we had to decide on something right now.

In an EKG, each squiggle of the cardiac cycle is assigned a letter. When the cycle is stretched between the S and T, the EKG resembles a tombstone -- and it's a classic indicator of an acute heart attack, based on the presence of dying heart tissue. | Alison Mackey/Discover

The cardiologist prevailed, and in the cardiac catheterization lab, he threaded a thin, hollow tube from an artery in Gloria’s groin up to her heart. As he worked, I reviewed her EKG again. One section was stretched, indicating dying heart tissue and potentially an acute heart attack.

“Normal coronaries,” I heard the cardiologist report. He had squirted radiographic dye into the arteries supplying both sides of Gloria’s heart. The vessels’ internal contours showed everything was normal. “There is no heart attack. The vessels are all open. Let’s get her to the operating room.”

The members of the surgical team were waiting for Gloria in the OR. With an anesthesiologist monitoring her fragile vital signs, the surgeon inserted a flexible scope through a half-inch opening into her abdomen. He planned to put in a drain and get out quickly.

The surgeon carefully searched every corner of her abdomen, packed with organs, bowel, blood vessels and support structures. Then he looked up from the monitor, which displayed what the scope saw: “There’s nothing here. It’s all normal.” Gloria was taken back to the ICU.

Driving home that night, I kept speculating about what had tipped this woman into repeated cardiac arrest. The abdominal discomfort and CT scan had both been red herrings. So what could look like a heart attack but not be one?

I thought about angina and an unusual version of it. Most people have heard of classic angina, the pain felt in the chest during exertion when some part of the heart is not getting enough blood flow. Arteries are narrowed as a result of coronary artery disease (CAD) — a buildup of plaque. Complete obstruction of an artery from sudden formation of a clot causes a heart attack.

Coronary vasospasm is different. In 1959, physician Myron Prinzmetal first described vasospastic angina, aka Prinzmetal’s angina. Unlike typical angina, this isn’t due to plaque buildup. Instead, what might be an otherwise normal artery spasms tightly. Blood flow is nearly cut off just as in severe CAD, triggering symptoms identical to that of a heart attack. But unlike the arteries in CAD, narrowing caused by vasospasm is reversible. The accompanying EKG changes are likewise temporary, departing when the spasm resolves.

Studies by Prinzmetal and others confirmed this phenomenon in people experiencing coronary vasospasm, later referred to as Prinzmetal’s attacks. These unprovoked, spontaneous spasms comprise about 2 percent of all cases of angina. Its true cause is unknown because it so often goes unrecognized. Smoking and stimulant use are among the known risk factors. Drugs have been identified that can reverse the spasm; others, when used in a diagnostic test, can provoke it. I’d have to keep it in mind.

Gloria’s night was uneventful and in the morning I learned that she’d begun breathing on her own. Coupled with some limb movement, we hoped this heralded an early neurologic recovery.

I shared my ideas about vasospasm with the cardiologist, who agreed that a test could confirm the diagnosis. But events soon rendered that plan moot.

Around noon, Gloria’s low blood pressure alarm sounded. The nurse noted that her heart rate had slowed to a crawl. And the stretched EKG cycle, which had disappeared after the previous day’s not-a-heart-attack attack, was back as well. It was happening again — the coronary vasospasm. But this time Gloria wasn’t in her kitchen, she was in the ICU.

She received medicine that reverses the extreme slowing of the pulse. Coupled with an infusion of nitroglycerine, a potent dilator of blood vessels, the T-waves reverted back to normal. The deadly vasospasm was aborted.

One in four Prinzmetal’s angina patients will experience a life-threatening heart rhythm disturbance — where it’s beating way too fast or way too slow — during a spasm. The resulting lack of blood flow can cause fainting or even sudden cardiac death.

That’s what had taken Gloria down. But from now on, she would take highly effective medications to prevent vasospasm.

Had the occasional abdominal and shoulder pains mentioned in the history actually been her Prinzmetal’s discomfort, the pain of non-classic angina? There was no way to know with certainty. But at least we now had a name — and a treatment — for that first domino.

H. Lee Kagan is an associate clinical professor of medicine at the Keck School of Medicine at USC. The cases described in Vital Signs are real, but names and certain details have been changed. This story originally appeared in print as "Domino Effect."