You may not realize it, but some corn, rice and wheat varieties can also be "ancient grains." But are ancient grains actually better for you, or just marketing mumbo-jumbo? 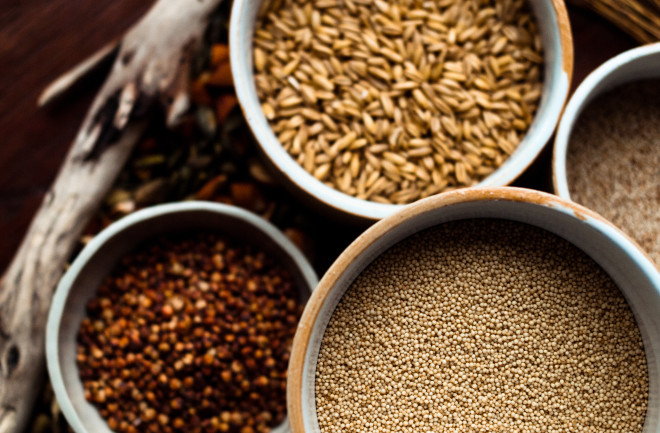 A food product that uses “ancient grains” will be sure to put the phrase on the package where anyone can see it. And though maybe the term sounds appealing — like it’s alluding to the healthier diets of our ancestors — it’s not immediately clear what it means.

“The 'ancient' [label] isn’t entirely a misnomer, but it gets confusing very quickly,” says Julie Dawson, a crop scientist at the University of Wisconsin-Madison.

Simply put, an ancient grain is one that has gone untouched by modern intensive breeding. In the U.S., the foods we most often find on shelves that qualify for the title are some wheats like einkorn and farro, as well as non-wheat grains like millets, amaranth and buckwheat (which, despite its name, is not a kind of wheat).

Corn and rice can fall into this category too, so long as the variety has a genome that breeders haven’t drastically changed, points out Dipak Santra, an agronomist at the University of Nebraska–Lincoln. Carolina Gold rice, for example, a version grown in South Carolina up until the Great Depression, has since come back into stores and would meet the “ancient” standard.

Whether a given grain might be considered ancient depends heavily on location. While farro and spelt varies grown and harvested in the U.S. are likely genetically similar to their ancient selves, versions of those crops grown elsewhere — farro in Italy and spelt in Germany — might deviate more from those original genetic signatures, as breeders in those countries have put a lot more work into the grains.

Across the world, one grain that has changed significantly from when it first appeared is bread wheat. A descendant of a wild grass that merged with either farro or durum wheat, bread wheat came with benefits it’s predecessors didn’t — the inedible shell around each tasty kernel fell off easily and the part we like to eat came with the right gluten structure to help bread rise. Bread wheat cropped up for the first time thousands of years ago, and though clearly appreciated by humans since then, began its biggest genetic transformations in the 1960s. Huge government investments in bread wheat (as well as rice and corn varieties) to create durable, pest-resistance and high-yielding crops funded breeding programs that drastically changed what the crop's original genomes looked like.

Are Ancient Grains Any Healthier?

What drove the breeding push  — and what still drives most plant breeding — was extracting higher volumes of grain per acre, not necessarily improving the quality of the nutrients in each kernel. “With breeders, it’s all about yield, yield, yield — how to produce more starch per acre,” Santra says. Yet for people looking for more nutrient-dense grains, the “ancient” labeling holds the promise of a healthier choice.

It’s possible that in some cases, that promise holds true. Francesco Sofi, a food science and clinical nutrition researcher at the University of Florence, and his colleagues have investigated nutrition differences between older and modern wheats by giving study participants diets that incorporated one of the two grains. When comparing current commercial wheat to versions bred in Italy prior to the 1950s amongst 20 study participants, those eating the ancient renditions showed slightly lower cholesterol and fewer markers of inflammation.

For the most part, researchers agree that many more studies are needed, looking at a range of wheats grown in different areas, to parse any major health differences. For example, the people in Sofi’s research ate Italian-grown wheats. And since what an “ancient grain” looks like varies around the world, those findings may not apply to, say, people in the U.S. swapping their sandwich bread for a durum wheat variety. “It needs to be tested in different backgrounds, varieties and countries,” Sofi says.

Also, Sofi and his lab didn’t investigate all the ways different wheat products can be refined and modified before sale. For example, most processing protocols for bread wheat extract a portion of each kernel and toss the other components. Without the pieces cast aside, the final bread is softer and more shelf-stable. But the removed bits carry a lot of fiber, minerals and vitamins. That's why U.S. dietary recommendations suggest that people make half their grains “whole” varieties. That way, more servings come with as many nutrients as possible.

The people interested in whole grains and ancient grains overlap enough that in the U.S., most companies sell einkorn, emmer and spelt as whole grains, Dawson says. But producers could treat ancient wheats the same as bread wheat and strip away nutritionally-dense portions. Companies could also add more preservatives, sugar and salt in ancient wheat products, the same as they do with bread wheats, and create a less healthy product. And when “ancient grains” are trendy, brands are incentivized to create products that appeal to the packaging labels shoppers are looking for.

The tweaks a manufacturing facility might make are important for shoppers to keep in mind if they want their ancient grains to also be the healthier choice. Beyond prioritizing the quality of the food product, diversifying the kinds of grains you eat could be worthwhile, too.

Non-wheat grains lack gluten and can be a good choice for people with celiacs disease, and each option that people in the U.S. think of as “ancient” varieties have unique nutritional compositions. Products that make the ancient grain claim tend to be more expensive, as farmers can’t harvest as much of the crop per acre as they can with other plants. But researchers are working on ways to bring the cost down. “I’d like to see them more widely available, because I’d like to see diversity in peoples’ diets,” Dawson says.