Phytoestrogens, which are present in soy products, have the ability to bind to receptors like estrogen. But scientists are still untangling soy’s impacts on hormonal health. 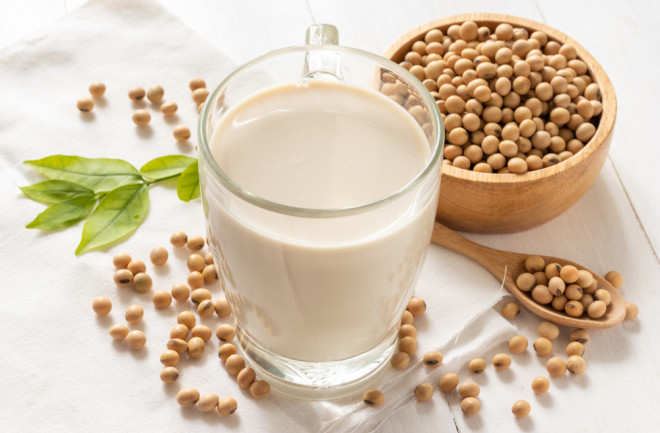 Fake meat is hitting the mainstream like never before. Last August, KFC did a trial run for plant-based chicken and sold out in just five hours. And it’s nearly impossible to drive past a Burger King without seeing an ad for the Impossible Whopper. But long before plant-based meats came into the spotlight, their root ingredient, soy, was already finding a way into our stomachs.

Soy is in a plethora of processed foods — everything from baby formula to granola bars to sports drinks. But as soy snuck into more and more foods over the past decade, one part of the plant has prompted concerns — phytoestrogens. Also known as plant estrogens, these compounds have the ability to bind with our hormone receptors the same way human estrogen does.

But how much does soy actually mess with our hormones? Research has shown that the impacts of the plant aren’t black and white. Some reports suggest that soy-based infant formula may have an impact on babies with hormonal issues. And if you’re a woman about to enter menopause, you may hear that soy supplements could help quell symptoms.

For most people, soy is safe to consume in reasonable quantities. But let’s start with the extremes. What happens when you drink a lot of soy milk — say, three quarts a day, for example?

The story opens on a perplexed Vietnam War veteran talking about his swollen, oversized breasts. His body was changing dramatically, and he didn’t know why.

In 2009, Men’s Health magazine ran an article about the man in question, asking if soy was “the most dangerous food for men.” The article follows his cascade of dramatic symptoms — hair loss, erectile dysfunction and even mood changes.

The man told doctors he was drinking 3 quarts of soy milk every day. And after he stopped consuming the beverage, his symptoms slowly receded, making him the subject of a 2008 case study published in the journal Endocrine Practice.

The study authors described the case as “very unusual.” But is soy still the “most dangerous food for men,” as the Men’s Health article put it, when consumed in reasonable quantities? Likely not. Typically, men who consume soy in suggested quantities won’t grow pronounced breasts or lose hair. In fact, it likely has little to no effect on the thyroid or testosterone levels.

A 2019 analysis in Scientific Reports reviewed 18 studies, finding that soy supplements had no effect on thyroid hormones in both adult men and women. And a study three years prior, in 2016, found that men with low testosterone experienced no change in their levels of the hormone after eating 15 grams of soy protein every day for three months.

While some strange cases might make healthy adults wary of soy, they’re not the group most likely to have problems linked to soy consumption. Instead, research shows that soy could complicate things for much younger patients.

Cheryl Rosenfeld, a professor of biomedical sciences at the Christopher S. Bond Life Sciences Center at the University of Missouri, runs a lab where she studies the effects of phytoestrogens on the gut and brain. In 2019, she co-authored a review of how soy affects human and animal babies — specifically looking at studies that involved infant formula and soy consumption in mothers during pregnancy.

So far, she says, there’s evidence to show that phytoestrogens may have a detrimental effect on babies who are exposed to soy at a young age. Some studies she looked at found effects on the developmental function of infants, and even impacts on aggressiveness and play behaviors.

And other research on thyroid conditions in babies has found that soy can have detrimental effects on their ability to have other conditions treated. For example, a 2004 study found that when babies with a thyroid condition called congenital hypothyroidism were fed soy formula, their symptoms lasted longer. The presence of soy ultimately made the babies’ condition more difficult to treat.

“What we’re exposed to early in our life can set the programming such that it can have dramatic and long-stemming consequences,” she says. “You’re going to tinker with this whole tightly regulated system.”

But the biggest deficit in research so far is that science still doesn’t have a detailed record on what happens to human babies who consumed soy as infants once they get older. That leaves Rosenfeld cautious about drawing a definite conclusion on how soy impacts the young.

On the other end of the spectrum, Rosenfeld says middle-aged women are often recommended to take supplemental soy to help with mood swings caused by menopause. But how well that helps, exactly, also remains an open-ended question.

Break It Down Now

In order to understand how soy is broken down in the body, we need to talk about an important compound: S-equol. When soy phytoestrogens mix with the right intestinal bacteria, S-equol is produced, making it easier for the body to reap cardiovascular and hormonal benefits from soy that have been noted in several studies.

That’s where soy supplements come in as a treatment for menopause. Researchers have found that, in some cases, phytoestrogens can help alleviate symptoms like hot flashes and night sweats.

But here’s the catch: Not everyone’s body can produce S-equol. It’s more often found in the guts of people who live in countries across Asia, where diets rich in soy products tend to be more common. In the U.S., however, S-equol is often absent. And even when it does abound in the body, S-equol might react poorly with the high-fat diet a typical American might consume.

In a study conducted in Rosenfeld’s lab, researchers gave supplemental S-equol to mice on a high-fat diet. They found that the mice that received S-equol became fatter and had worse metabolic disorders. However, the supplements did relieve their anxiety and depressive behaviors.

“It was an interesting study, and we kind of got these mixed effects,” Rosenfeld says. But there’s still more to be understood about what S-equol does for women going through menopause.

It’s still unclear why one works better than the other in specific cases, and research is inconclusive on just how much soy can help. But decoding soy’s effects on a larger scale might pose a challenge, since nutritional studies are typically funded by the food industry.

More Than ‘Meats’ the Eye

Many soy studies are funded by industry groups — a predicament that can make our understanding of phytoestrogens more murky. Though Rosenfeld has received grants from the National Institutes of Health to study S-equol and gut microbiota, she says it’s rare that strictly nutritional studies receive funding from large, unbiased scientific organizations.

When studies are funded by the industry — say, a large company that sells soy products — results may be cherry-picked to show only the benefits of the plant. On the other hand, if a competing industry decides to recruit researchers to look at soy, the results may be tailored to only mention its negative effects. The results might sway consumers to purchase (or avoid) a certain product — leaving scientific research that can seem conflicting or limited.

That sentiment is echoed by Frank Sacks, a Harvard University professor who studies cardiovascular disease prevention. He studied the effects of soy on cholesterol and hormone levels under funding from the American Heart Association in 2006. In a previous interview, he noted that nutritional studies don’t tend to be the ones singled out by big research grants.

“Most of the research in the nutrition field is funded by industry,” Sacks said. “I don’t agree that all industry-sponsored studies are bad … but it’s just a trickier situation.”

As for now, the consensus on soy’s benefits and drawbacks isn’t black and white. There are some situations where it may be best to stay away from soy, but that generally differs from person to person.

“Sometimes they say the poison is in the dose,” Rosenfeld says. “[But] a modest amount is probably OK.” Still, she says there is enough evidence to suggest that phytoestrogenic effects need a deeper look, especially among children.

Ultimately, there’s still a lot we don’t know about soy in general. But unless you’re guzzling 3 quarts of soy milk a day, you’ll likely be safe digging into that plant-based burger or fake chicken strips — in moderation, of course.