What Does It Mean When Everyone Can Get Their DNA Sequenced? 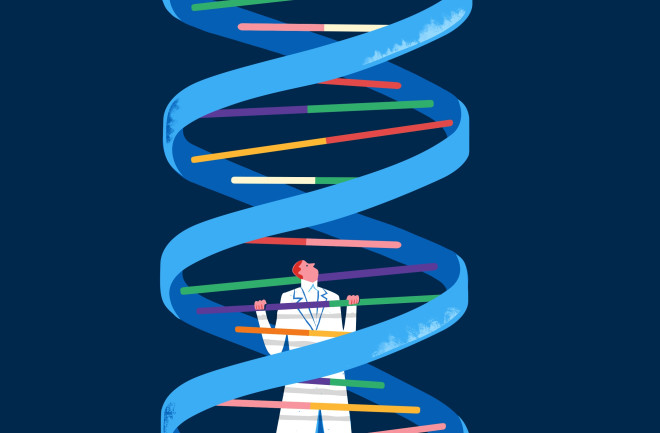 A middle-aged woman arrives for her annual checkup toting her 50-page DNA profile, downloaded from the web. The document warns that she has gene variants that might increase her risks for Alzheimer’s disease and breast cancer — a shock, she says, since no one in her family has had either. You’re her doctor. You’ve got 12 minutes for this appointment. What should you do? Or, more precisely, what are you legally obligated to do?

Though hypothetical, this scenario parallels very real challenges to healthcare professionals as direct-to-consumer (DTC) genetic testing becomes increasingly popular. Since 2007, when 23andMe began providing online DNA tests to anyone with a credit card, at least 90 competitors have entered the business; some 26 million people in the U.S. alone have sent in saliva samples.

DTC companies don’t conduct clinical testing, so their labs don’t have to meet the same strict federal standards as medical facilities. The companies typically post disclaimers stating that their products are not for medical use. Yet more and more patients are asking physicians for advice based on DTC test results, leading doctors into largely uncharted territory.

“There are false negatives, which could be catastrophic if you actually have something that you ought to act on,” says Ellen Wright Clayton, a professor of law and pediatrics at Vanderbilt University. “There are also false positives, which could drive people to interventions that are not only costly but potentially harmful.”

Even if a test is accurate, the likelihood of developing a condition based on a single gene variant can be unclear. Many conditions, from certain cancers to mental health disorders, are the result of complex interactions between an individual’s DNA, lifestyle and environment. Meanwhile, DTC tests may overlook some genetic red flags, for instance, checking for the most common variants of the BRCA1 and BRCA2 genes associated with increased risk of breast and ovarian cancer, but ignoring hundreds of others.

And the liability issues surrounding such tests are muddier still.

In April, a team led by Clayton and University of Minnesota researchers completed a groundbreaking attempt to develop a roadmap for navigating this and other new genomic terrain. The three-year project, known as LawSeq, analyzed current U.S. federal and state law around genetic data; the goal was to provide guidance on what the law should be, and how to address legal concerns in clinical practice.

Even ahead of LawSeq’s paper on DTC testing liability, which is expected in the coming months, concern about legal landmines in the general field of genomics is growing. For example, also in April, the American Society of Human Genetics (ASHG) published guidelines on researchers’ responsibility to inform study participants when results of their DNA tests show previously unsuspected dangers.

Geneticists often use anonymized data — collected from medical labs or from DTC company databases and stripped of identifying information — to investigate inherited conditions. If a mutation once thought to be benign is found, years later, to create a serious disease risk, are researchers obligated to track down the DNA donors who carry it? The ASHG suggests they should try.

But no guidelines currently exist for doctors who are face-to-face with patients clutching printouts of their DTC test results.

Which brings us back to our theoretical physician. Refusing to look at the woman’s DNA profile could leave the doctor liable if she later develops cancer, notes Arizona State University law professor Gary Marchant, a LawSeq team member. The ideal solution is to have her results validated in a clinical lab — but insurance companies typically won’t pay for that, and many patients can’t afford it. If the physician encourages the woman to have a preventive mastectomy based on an iffy DTC test, however, the patient could sue for malpractice if the test results were later shown to be wrong and the procedure unnecessary. “These tests put doctors in a damned-if-you-do, damned-if-you-don’t situation,” Marchant says.

The tests could raise perplexing questions for juries as well. So far, case law on DTC testing is virtually nonexistent; Marchant says not a single lawsuit has made it through the courts. (If any have been filed, they’ve likely been settled before trial, their details guarded by nondisclosure agreements.) Litigation based on medical DNA testing has been increasing, however, with more than 200 cases since the 1970s. Suits related to online services are sure to follow. “If someone starts to win some cases,” Marchant predicts, “you’ll see a swarm of lawyers jumping on the bandwagon.”