What doctors do when you get a live fish stuck in your throat. (Warning, it's not pleasant.) 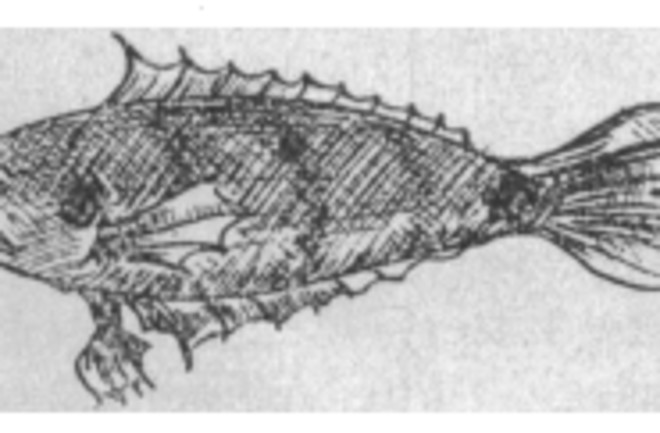 "The fish, which measured 13cm in length, and 8 cm at the greatest circumference, is known in Malaya as ikan betook. It frequently leaves the water, and its credited with being able to climb a tree. The Malay villagers affirm that when one is fishing for ikan betook one should "not laugh but keep one's mouth shut." The accompanying photograph shows its approximate shape."

Okay, I admit it. I am completely fascinated by medical case reports involving "foreign bodies"--medical speak for people getting random stuff lodged inside their bodies. From nasal leaches to rectal eggplants to swallowed coins, people get a lot of weird stuff stuck inside themselves. But this has got to be one of the most disgusting examples we've seen yet: this 1947 medical case report of a fisherman getting a live fish stuck in his throat is guaranteed to make you squirm. And before you dismiss it as a once-in-a-lifetime anomaly, you should know that it's pretty common. Sweet dreams!

"A "Fishing" Story Strange cases come our way from time to time in surgical practice, but I think that the following case is worthy of record. CASE REPORT: A Malay villager was admitted to the Malacca General Hospital on Feb.27, 1947, in a very distressed state, with laryngealobstruction.There was a marked stridor and retraction of the intercostal spaces. He was throwing himself about on the stretcher and was very dificult to examine, and of course quite unable to give any history. This, however, was freely and willingly given by about six of his relations simultaneously. It appeared that an hour previously the man had been drawing in his net in a rice field. Holding up the edge of his net,he peered over to inspect this catch, whereupon a fish leaped out of the water into his mouth and disappeared down his throat. All efforts on the part of friends and relations to dislodge the fish proving fruitles, it was decided to bring him to the hospital. On examination the tail of a fish could be clearly seen over the base of the tongue. This was grasped in sponge-holding forceps; but traction only resulted in the tail coming off, making matters worse than ever. The body almost filled the pharynx. Palpation revealed the fact that the long spiked dorsal fin of the fish was extended and firmly imbedded in the posterior pharyngeal wall, which was fast swelling up, and the patient was becoming cyanosed. He was taken to the theatre, his struggles being controlled by 5ml of thiopentone intravenously, and a low tracheotomy was performed. Breathing through the tube havingb een established, it was found that his jaws were firmly closed and could not be opened. He was therefore deeply anaesthetized by open chloroform over the tracheotomy tube, and the mouth opened. By forcing an index finger down alongside the fish the fingernail could just reach the gil. Then by aprocess of "bipolarversion," one finger inside and one outside the pharynx, the fish was "turned" from "breech" to "vertex" and successfully delivered.There was severel aceration of the posterior pharyngeal wall, which was swabbed with flavine and left to granulate. The tracheotomy tube was removed on the second day and recovery was uneventful." Related content: NCBI ROFL: Nasal leech infestation: report of seven leeches and literature review. NCBI ROFL: Ingested foreign bodies and societal wealth: three year observational study of swallowed coins. NCBI ROFL: Stinging in the oral cavity caused by ingestion of the sperm bags of a squid: a case report.