A growing body of research is still untangling the link. 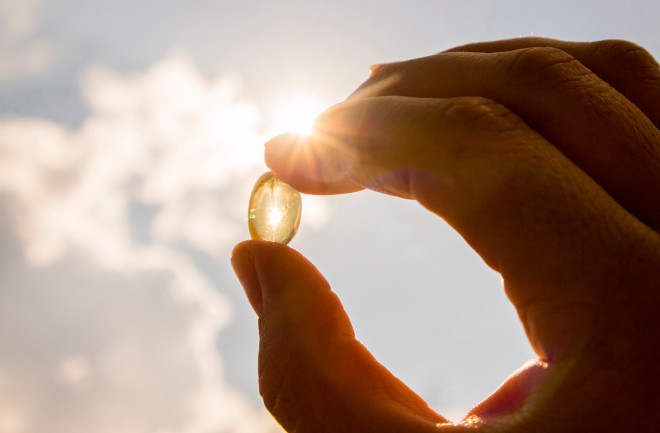 We know vitamin D is good for us — it helps keep our bones strong and supports our immune system.  But some 42 percent of the U.S. population doesn’t get enough of the sunshine vitamin. Those living in colder climates can’t get their daily sun dosage from November through April because of the sun’s angle and strength, and are often bundled up against the cold so much that the little bit of skin that is exposed is too small to absorb daily requirements. Perhaps surprisingly, in regions where it’s easier to get year-round sun exposure, fewer people get breast cancer than in colder regions, according to a review of multiple studies in Environmental Health Perspectives in 2020.

Because of these regional differences, scientists have looked at link between vitamin D and breast cancer for years. While there have been reports that suggested vitamin D could prevent breast cancer, the studies in people are unclear. A scientific review of dozens of studies published in Nature in 2018 found inconclusive results overall. The meta-analysis concluded high levels of vitamin D in younger women has a protective effect, but researchers wrote they could not conclude whether taking vitamin D supplements have any preventative benefit.

While further research is still underway, it’s possible that vitamin D may affect the biology of tumor cells themselves, says epidemiologist JoAnn Manson, a professor of medicine at Harvard Medical School. Some scientists speculate that the vitamin may make cancerous cells less likely to be aggressive and spread to other parts of the body from the original cancer site.

Vitamin D’s role in cancer prevention is still somewhat of a mystery. But a team of researchers found, while not reducing the onset of cancer, after two years of taking daily vitamin D supplements, participants had a significantly lower risk of cancer death compared to those taking the placebo, a study in the New England Journal of Medicine in 2019 concluded.  The study — called the VITAL study — found that those with normal body weight who took vitamin D experienced a 42 percent reduction in their risk of cancer death. The clinical trial lasted more than 5 years and involved about 26,000 middle-aged and older men and women.

Despite the study’s large size, researchers were not able to draw conclusions on specific cancers, just on the risk of any type of cancer fatality, says Mason, the project’s lead investigator. In a follow-up paper, published in JAMA Open Network in 2020, however, participants in the overall study population given vitamin D reduced their risk of developing metastatic or fatal cancer.

In earlier observational studies, researchers have found people with breast cancer had insufficient levels of vitamin D at the time of diagnosis. But scientists didn’t know if low vitamin D levels were the cause or the result of cancer. Were patients’ vitamin D levels low because they were not getting outside to exercise while ill, or because of a generally poor diet? Or did inactivity contribute to the cause of their cancer in the first place, since exercise reduces cancer risk? Researchers couldn’t draw conclusions with certainty. In short, poor diet, inactivity and obesity can all cause inflammation and deplete vitamin D, says Manson, also preventive medicine chief at Brigham and Women’s Hospital.

As for how much vitamin D people need to reduce risk, there isn’t evidence that high levels are better than moderate levels, she says.  “We know it’s important to have adequate vitamin D levels in terms of bone health and cardiovascular function. Some is good but more is not necessarily better.” Plus, too much vitamin D can lead to elevated calcium levels in the blood and kidney stones.

We can get vitamin D from food, but it’s minimal compared to what we can get from the sun. Even with vitamin D added to foods such as milk and cereals, adults who are Black and Latinx, obese, low-income, have lower education levels and who are infrequent milk drinkers have a higher prevalence of vitamin D deficiency, a 2011 study in Nutrition Research found.

Vitamin D, whether taken orally or generated in the skin, generates a compound that binds to a protein receptor that regulates many cellular functions. This receptor, which is present in the majority of human breast cancers, slows the growth of cancer cells when activated, says JoEllen Welsh, a professor and researcher at the State University of New York at Albany’s Cancer Research Center. In laboratory research in cells and animals, a cancerous cell exposed to the active vitamin D compound will die, she says. Research studies suggest vitamin D deficiency and inadequate activation of the vitamin D receptor could increase breast cancer risk or aggravate the disease in those with cancer. Those who suffer from one of the most aggressive breast cancers, triple-negative breast cancer, are more likely to be vitamin D deficient, Welsh adds.

If breast cancer patients’ vitamin D levels in their blood measure less than 30 ng, or nanograms per milliliter, Memorial Sloan Kettering Cancer Center oncologist and researcher Neil Iyengar prescribes them vitamin D3 to get their levels to the ideal range. Manson adds that if your levels are low and your doctor agrees,  1,000 to 2,000 IUs (or international units) of vitamin D a day is reasonable.

With the VITAL study, Iyengar says, there’s sufficient scientific research supporting the premise that adequate vitamin D levels lower the risk of cancer survivors later developing metastatic breast cancer. He also works with patients to lower their body mass index (BMI) because obesity increases cancer risk. “I always tell my patients, before we start fine tuning things, the first goal is to get into a healthy BMI range.”

The majority of the women diagnosed with breast cancer are obese at the time of their diagnosis, says Patricia Sheean, registered dietician and breast cancer researcher at Loyola University. Seventy-five percent of breast cancers are estrogen positive, and fat cells can produce a lot of estrogen, she says.

When people can’t get their daily vitamin D from the sun, Sheean suggests they get what they can from foods such as fish, fortified milk and, if they can stand it, cod liver oil, or from supplements. The VITAL study found no downsides of taking up to 2,000 IUs — about 50 micrograms — a day for five years, Manson says. “The main issue to avoid is vitamin D deficiency.”