What CDC Actually Found: No Evidence of a Slowdown in National Fattening

On November 28^th, the Centers for Disease Control and Prevention (CDC) announced that there was no increase in obesity rates for adult Americans in the past few years. The media ran with this surprisingly positive story. The New York Times headline read: “Study Sees Signs of Obesity Rates Stalling.” “For the first time in more than 25 years, Americans aren't getting any fatter,” trumpeted the Los Angeles Times. Skimming the headlines alone, one could easily be fooled into thinking obesity rates were leveling off, even shrinking. Unfortunately, there's little data to think that's the case. A CDC report titled, “Obesity Among Adults in the United States—No Statistically Significant Change Since 2003-2004” spawned the news. There may not have been statistically significant changes in American obesity rates between 2003-2004 and 2005-2006, but there were changes. In fact, the report shows an increase inoverall obesity in both men and women—about two percent each. That’s not terribly encouraging when we look at the CDC data going back to the 1960’s. The overall obesity rate—the percentage of the adult population with a body mass index (BMI) of 30 or greater—has increased from about 15 percent in the late 1970s and early 80s to around 34 percent today. On average, that’s an increase of roughly 0.7 percent annually, based on this reporter’s back-of-the-napkin calculations. In that light, the recent two-percent-in-two-years increase doesn’t seem so insignificant. The agency is correct in pointing out that the change isn't statistically significant. But it's strange that the CDC would focus on such a small time frame and then announce that nothing had changed. “In the past when we found an increase in obesity, we were looking at longer periods of time,” says Claude Bouchard, nutrition chair at the Pennington Biomedical Research Center in Baton Rouge, Louisiana. “From year to year to year to year, we should not expect an increase of more than one or two percent,” even if the population is continuing to fatten at the same alarming clip. If the rate continued to increase at one percent per year, nearly 60 percent of Americans would be obese—not just overweight but obese—by 2030. “You get much more [statistical] power when you look at longer time periods,” concedes CDC epidemiologist Cynthia Ogden. She emphasizes the importance of looking at the eight-year period between 1999 and the present rather than the two year period between 2003-04 and 2005-06 alone. Over that time, an obesity rate plateau in women is a bit more plausible, though the obesity rate is arguably still creeping up. For men, though, there's little indication that obesity rates are slowing at all. Still, Ogden says she is encouraged that the increases in obesity rates were smaller and not statistically significant. And maybe the media and public are, too, which might explain the rush to embrace the idea that our population might not be expanding unstoppably. “[The CDC] is not putting any spin on it that’s not supported by the data,” Bouchard says. But he’s not convinced. “I have the feeling [obesity] continues to increase.” That’s especially troubling given the CDC’s own Healthy People 2010 goal of reducing the adult obesity rate to 15 percent by 2010. For that to happen, the American population would have to revert to circa 1978 obesity levels in just over two years. That will take more than a faux plateau and good intentions. Sure, the public may be tired of hearing bad news about its weight. But sugarcoating obesity data to make it more palatable is not the answer. And really, won't eating all that sugar just make things worse? 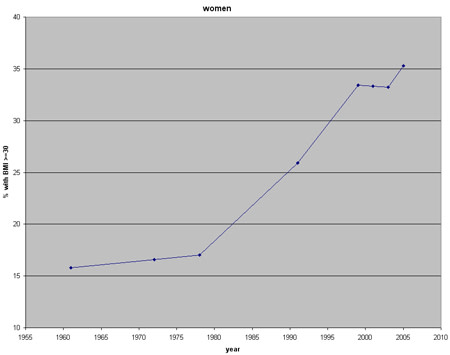 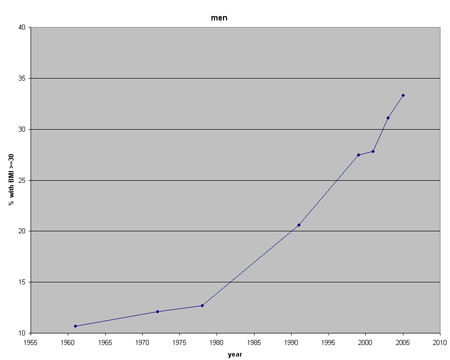