We've Been Putting A Potentially Dangerous, Drug-resistant Yeast in Food for Centuries 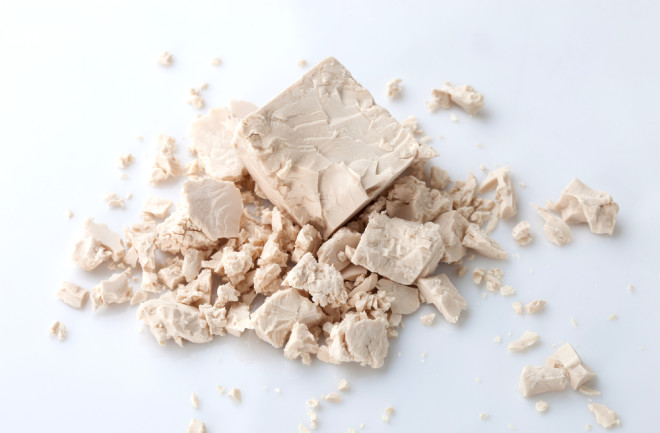 A block of fresh yeast. (Credit: avs/Shutterstock)You say to-MAY-to, I say to-MAH-to. You say po-TAY-to, I say po-TAH-to. You say Candida krusei, I say Pichia kudriavzevii — and that should make you a little nervous. OK, so that last bit needs explaining. C. krusei is a drug-resistant yeast species that’s responsible for thousands of potentially fatal infections in the United States every year. P. kudriavzevii is a yeast species that’s been widely used for centuries in the food industry and is playing a larger role in the production of bioethanol and other chemicals.C. krusei and P. kudriavzevii, two very different names, playing two very different roles ... uhh, yeeeaaah, scientists have confirmed they’re the same species. Indeed, we’ve been given the ole’ Jekyll-and-Hyde treatment, which means we’ve been using a drug-resistant strain of yeast, capable of infecting human beings, on an industrial scale for centuries. This little truth bomb comes courtesy of a team of researchers led by Alexander Douglass at the University College Dublin in Ireland. A Yeast by Many NamesYeast of the Candida species cause roughly 46,000 fungal infections in the U.S. every year, with a 30 percent mortality rate — the ebola virus hovers around 50 percent, by comparison. Candida yeasts actually reside in the intestines and can be found on the skin and mucous membranes. The trouble starts when these yeasts begin to multiply at far higher rates than normal, especially if they enter the bloodstream. Candida infections pose a particular threat to people with weakened immune systems.The most notorious among the Candida gang of yeasts is C. albicans, which is the culprit behind more than half the annual Candida infections in the U.S. C. krusei, the yeast featured in this study, is only responsible for about 2 percent of infections. Still, you wouldn’t put C. krusei at the top of your ingredients list for your next meal.But that’s exactly what we’ve been doing by using P. kudriavzevii around the world in fermented beverages, milk and biofuels.Taxonomists Knew ItYeast taxonomists back in 1980 proposed that C. krusei and P. kudriavzevii were the same species, but the theory was difficult to prove and the information didn’t trickle out to other scientists. And for decades, the yeast’s dual identity split the research community into two fronts, says Ken Wolfe, a UCD geneticist and co-author on the study.“There are basically two separate communities of scientists working on this organism, publishing papers about it but calling it different names, which led to very poor communication and ignorance about each other's work,” Ken Wolfe, a UCD geneticist and co-author on the study wrote in an email to Discover. “The medical people called it C. krusei, and the food/biotech people called it P. kudriavzevii.”Because of the split, research comparing the genetic similarities of P. kudriavzevii and C. krusei was lacking. There had never been an analysis comparing the environmental and clinical strains of these two (well, one) yeast species.So, Douglass and his team sequenced the genomes of 30 different strains of both yeast species. They found the strains share genomes that are 99.6 percent identical in DNA sequence. Researchers say that’s pretty conclusive evidence that they are the same. Douglass and his team published their findings Thursday in the journal PLOS Pathogens. Wolfe believes scientists would have arrived at this conclusion far sooner had the wider scientific community been privy to what the taxonomists already knew.Now What? How concerned is Wolfe about all of this? He’s at about a 3 on a scale of 1-10. “This yeast only causes infections in immunocompromised people, such as organ transplant recipients or an AIDS patient,” says Wolfe. “People with healthy immune systems need not be concerned.” You’ll find P. kudriavzevii in some craft beers, sourdough breads and pickled vegetables. Therefore, Wolfe would advise people with weak immune systems to avoid craft beer and pickles. The yeast poses a particular problem for organ transplant recipients because they are treated continuously with a drug known as fluconazole to prevent fungal infections.“If these patients do get a fungal infection, it tends to be with a fluconazole-resistant species such as P. kudriavzevii. So for these patients, eating foods that contain P. kudriavzevii seems inadvisable,” says Wolfe.The Centers for Disease Control and Prevention considers Candida fungal infections a growing threat, given that they are resistant to the fluconazole antifungal treatment. The C.D.C. considers anotherr strain in particular, C. auris, an emerging global threat. It’s causing infections and hospitalizations around the world, and is resistant to multiple forms of treatment. Douglass says their research is a starting point, and should serve as a resource for ongoing investigations. It’s an earnest invitation for more researchers to examine these yeast strains a little closer, and perhaps rethink how we use them in future applications. “I think it would be appropriate for regulators to make spot-checks on the food products, particularly to check that the P. kudriazeii strains they contain are not resistant to other drugs as well as fluconazole,” says Wolfe. “We found that some environmental strains of P. kudriazeii were relatively resistant to other drugs too.”