Is going barefoot actually better for us? Here's what the science says. 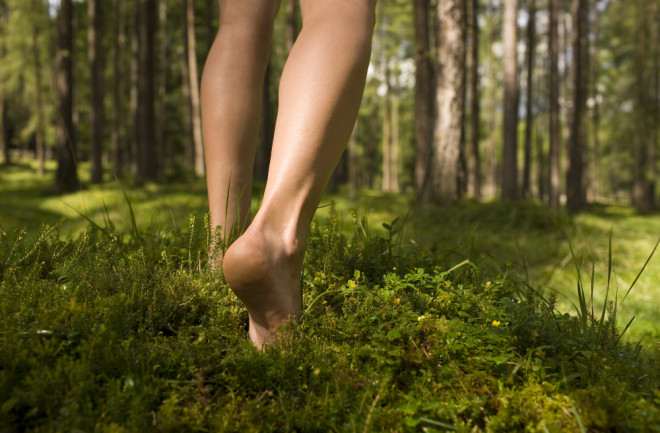 With summer in full swing, many people are kicking off their shoes — and it’s not just happening at the beach or in the park. Walking or running barefoot has gained popularity over the past decade, as have minimalist shoes designed to imitate the feel of going barefoot.

Claims abound that ditching shoes can improve strength and balance, resolve hip, back or knee ailments, and prevent painful foot deformities like bunions or fallen arches. But is barefoot actually better or is it just a fad?

Like all other animals, humans evolved to walk without shoes. Then, as our ancestors strode across the savannas in search of food and shelter, they eventually figured out how to protect their feet from extreme temperatures and sharp objects: wrap them in animal hides. These early versions of shoes likely enabled our species to travel farther, faster, and more safely.

The oldest shoes discovered date back to 8,000 years ago. However, fossil evidence indicates that our species probably began wearing sandals or moccasins over 40,000 years ago. Cushioned shoes, however, only came on the scene about 300 years ago. Some studies show that these padded soles have shifted the foot’s form and function.

Human feet are complicated and sophisticated machines, containing almost one-quarter of all bones in the body. Each foot has 200,000 nerve endings, 26 bones, 30 joints, and more than 100 muscles, tendons and ligaments, all of which work together seamlessly as we move around. So it stands to reason that covering those many intricate parts with a shoe will change how we move.

In his 2009 bestseller Born To Run Christopher McDougall championed the now-popular idea that modern, cushioned shoes are the cause of many muscular-skeletal injuries — at least for runners. McDougall studied the Tarahumara tribe in Mexico, whose members often run over 100 miles up and down stony trails in nothing but thin, homemade sandals. He ditched his padded sneakers, curing his own running-related injuries and spawning a movement to go back to barefoot basics.

A 2010 study showed that barefoot runners do put less stress on their feet. They take shorter strides, and strike with the middle of their foot first while curling their toes more. This spreads out the force more evenly across the foot.

Wearing a cushioned shoe with a heightened heel, on the other hand, enables runners to take longer strides and strike the ground heel-first. Landing on the heel generates up to three times more force than landing on the forefoot, sending shock waves up the skeletal system.

Shoes seem to change the way we walk, too. Barefoot walkers take shorter strides and step more lightly — mostly to test whether there’s something painful beneath the foot before it takes the body’s full weight.

Some research shows that modern shoes have changed humans’ foot shape over time. For example, people in India who are habitually barefoot have wider feet than Westerners, whose more slender, shorter feet gave less ability to spread out the pressure of impact.

Shoes can also interfere with neural messages set from our feet to our brain about the ground beneath us. Researchers from Harvard recently studied 100 adults, mostly from Kenya, to see whether calluses act similarly to shoes in terms of dulling the signaling between foot and brain.

Calluses are the evolutionary solution for thorns or stones: the skin on our feet is thicker than almost anywhere else on the body. Study subjects who walked barefoot most of the time had more calluses than their shod peers, which protected their feet but still allowed better tactile stimulation than shoes. Researchers also found that uncushioned, minimal shoes functioned more similarly to walking on callused bare feet than to wearing cushioned shoes.

But the jury is still out on whether going shoeless translates to better overall outcomes for the body.

As for children, a study released this year found no statistical differences in the gait or force exerted by 75 children, aged 3 to 9 years old, who walked both barefoot and in shoes across the same ground. A different study published in 2017 found that “evidence is small" for barefoot locomotion’s long-term effects on foot characteristics. In fact, after comparing the foot morphology of 810 children and adolescents who were habitually shod versus habitually barefoot, they concluded that “permanent footwear use may play an important role in childhood foot development and might actually be beneficial for the development of the foot arch.”

Minimalist shoes that give a barefoot feel but protective covering might just be the wave of the future — or, rather, a return to our prehistoric roots. A 2020 study evaluated the gait of 64 adults and found they had better gait performance walking with minimalist shoes than walking barefoot.

It seems our ancestors were on to something when they began wrapping their feet in leather millennia ago. While letting your feet roam naked occasionally certainly isn’t a bad idea, most of us probably shouldn’t toss our shoes in the trash any time soon.

More From Discover
Health
Is 'Expired' Milk Safe to Drink? Here's How to Know When to Throw Away Food
Health
What Science Says About the Weight-Loss Potential of The One-Meal-a-Day Diet
Health
Walking vs. Running Benefits: Should You Walk or Run for Exercise?
Technology
What Is a Social Media Cleanse?
Health
What is the Purpose of Hiccuping?
Mind
Gut Bacteria's Role in Anxiety and Depression: It’s Not Just In Your Head
Recommendations From Our Store
My Science ShopDiscover STEM Kits
My Science ShopDiscover 2022 Calendar
My Science ShopStrange Science
My Science ShopElements Flashcards
Shop Now
Stay Curious
Join
Our List