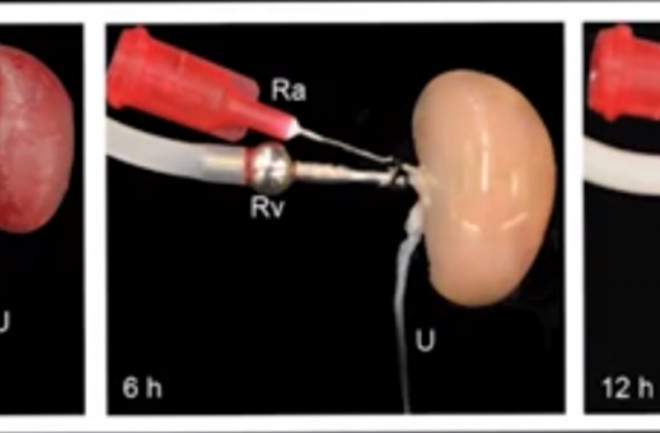 Diagram from the paper, courtesy of Jeremy Song, et al., Nature Medicine When a patient's kidney stops functioning, the existing options are limited to transplant or continual dialysis. Now scientists at Massachusetts General Hospital in Boston are a little closer to having a third option: transplanting kidneys that have been "upcycled" from previously unusable tissue. To make these functioning and transplantable organs, the researchers begin with unusable donor organs. We'll use the rat kidney in the film below as an example. Flushing the kidney of its natural cells leaves behind a structure of proteins, which the researchers repopulated with stem cells. In an oxygen- and nutrient-rich growth medium, these kidney and blood vessel cells multiplied and the regenerated rat organ eventually started to work like a normal organ. "The tissue became functional," said Harald Ott, one of the team's researchers, in the film. "These kidneys began to make rudimentary urine." To further prove the effectiveness of the method, the researchers transplanted the bioengineered kidney into a live rat, where it continued to do its kidney job. The research paper, published in Nature Medicine yesterday, says the potential outcomes aren't necessarily limited to animal test subjects. "Ultimately this is a very translational kind of research," Ott said. "It's very much focused on driving this all the way down to the bedside, getting this to the patient." Watch the film below to find out more. http://youtu.be/5wfdhB_VyJw Video courtesy of Nature Medicine