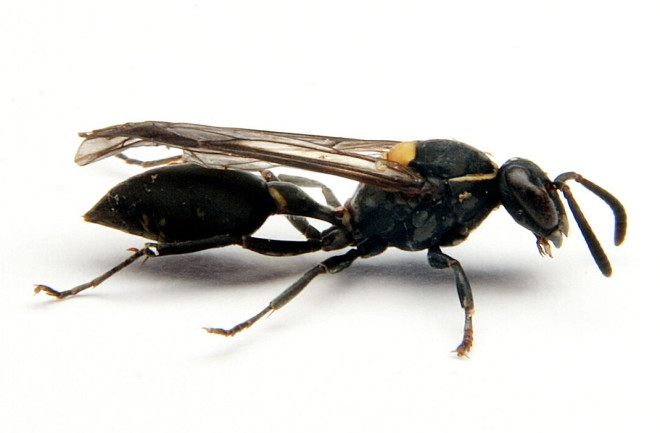 Many wasp species have chemicals in their venom that kill bacteria. In the last few years, researchers have found that some of these chemicals also kill cancer cells, though exactly how they work has remained a mystery.

Now a new study has described exactly how one of these chemicals works its cancer-fighting magic: by tearing holes in the cancer cells’ outer layer.

The venom of the Brazilian wasp Polybia paulista contains a molecule called MP1. It’s been previously found that MP1 can inhibit the growth of prostate and bladder cancer cells, as well as multi-drug-resistant leukemia, but it doesn’t harm healthy cells.

But the question was how. Researchers suspected that the answer lay in the cells’ membranes. That’s because the cancer cells that MP1 targets have two fatty molecules, or lipids, in their external membrane that normal cells don’t have.

These lipids – phosphatidylserine (PS) and phosphatidylethanolamine (PE) – now seem to be the signposts that mark a cancer cell for destruction.

To test how MP1 assassinated cancer cells, researchers João Ruggiero Neto and Paul Beales created cell membranes in the lab with PS, PE, or both on their surface. Then they exposed the membranes to MP1.

All the membranes were affected by the treatment, but it turned out that having both PS and PE was the secret combination that made cancer cells vulnerable to MP1. PS allows MP1 to bind to the cell, while PE lets it tear big holes in the cell membrane.

So MP1’s destruction of a cancer cell, researchers say, has two stages. First, MP1 bonds to the outer surface of the cell, and then it opens holes or pores in the membrane big enough to let the cell’s contents leak out. PS is crucial for the first part: seven times more MP1 molecules bound to membranes with PS in their outer layer. And PE is crucial for the second: Once the MP1 molecules worked their way into the membrane, they opened pores twenty to thirty times larger than in membranes without PE.

“Formed in only seconds, these large pores are big enough to allow critical molecules such as RNA and proteins to easily escape cells,” said Neto in a press release. When that happens, the cell dies.

The results suggest that MP1 might be a good candidate for a future cancer treatment. If it works, it would be the first cancer drug on the market which targets the cells’ lipid membranes. Neto, Beales, and their colleagues say it could be especially useful as part of a combination of drugs, each of which targets a different part of the cancer cell.

Of course, it will be a while before MP1 is ready to fight cancer in humans. First, researchers need to understand more about how it works, and they need to be sure it will be safe for patients.

The results are encouraging so far, however. Antimicrobial peptides like MP1 usually don’t differentiate between cancer cells and healthy cells well enough to be considered as treatments, but in the lab, MP1 killed cancer cells and bacteria without harming normal cells from rats.

“As it has been shown to be selective to cancer cells and non-toxic to normal cells in the lab, this peptide has the potential to be safe, but further work would be required to prove that,” said Beales in a press release.