Want to run harder, faster and longer this summer? Try drinking a slushie! 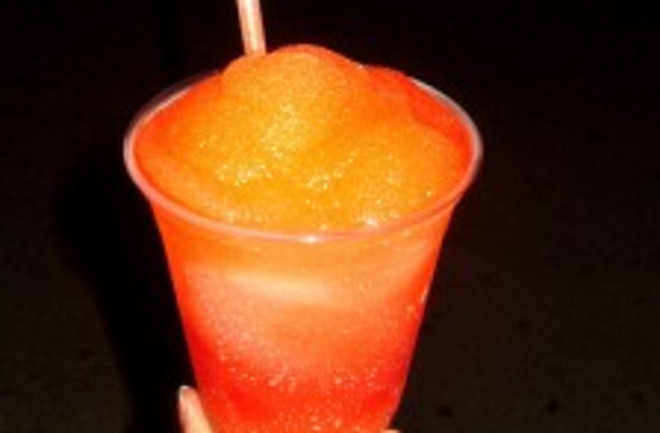 Here is a study for those of you out there who like to run races in the heat. The scientists measured how drinking "ice slurry" (the scientific term for slushie) affects one's ability to run hard in hot temperatures (34°C or 93°F). Not only did drinking 2-3 cups of slushie reduce the runners' rectal temperatures while running (!), it also allowed them to run longer when compared to drinking cold water. But if eating ice-cold ice slurry gives you headaches, fear not! Other studies indicate that taking a nice freezing ice bath works just as well. Because that sounds fun.

Ice slurry ingestion increases running time in the heat. "OBJECTIVE: To examine the effect of drinking an ice slurry (slushy) compared with cold water on prolonged submaximal exercise performed in the heat and on thermoregulatory responses. DESIGN: Crossover trial, with the 2 conditions counterbalanced and in random order. Results were adjusted for multiple comparisons by the method of Bonferroni. SETTING: Exercise laboratory study; Edith Cowan University, Western Australia. PARTICIPANTS: Moderately active male volunteers (n = 10; mean age, 28 years) who participated in recreational sport and who had no injuries or history of heat illness were included. INTERVENTION: Five to 14 days before the trials, the participants were familiarized with the procedure by a progressive treadmill run to volitional exhaustion at their previously determined first ventilatory threshold running speed, in the same hot environment as the trials (34°C, 55% relative humidity). The 2 experimental trials were completed at the same time of day, 5 to 20 days apart. During the first 15 minutes, the participants rested while baseline measurements were taken. Over the next 30 minutes, they drank either a 7.5 g/kg flavored ice slurry (-1°C) or the same volume of flavored cold water (4°C) and then commenced the treadmill run. Participants were instructed to keep their normal lifestyle habits stable. In the 24 hours preceding the trials, they were asked to avoid strenuous exercise and to consume a specified amount of carbohydrate and fluid but no alcohol, caffeine, nonsteroidal anti-inflammatory drugs, or nutritional supplements. Urine and blood samples were taken, and respiratory variables, heart rate, and rectal and skin temperatures were continuously monitored. Heat storage was calculated from temperature and anthropomorphic measurements. MAIN OUTCOME MEASURES: The primary outcome measures were comparisons of run time to exhaustion, perceived exhaustion, heat storage capacity, and changes in rectal and skin body temperatures during the 2 trials. MAIN RESULTS: All 10 participants took longer to fatigue (range, 2.4-14.2 minutes) after ice slurry (mean, 50.2 minutes; SD, 8.5 minutes) than after cold water (mean, 40.7 minutes; SD, 7.2 minutes) ingestion (relative mean increase, 19%; SD, 6%; P = 0.001). Mean rectal temperature during the rest period did not differ between conditions but was 0.32°C lower after drinking the ice slurry than after cold water ingestion before the start of exercise (P = 0.001). During the treadmill runs, rectal temperature rose for both conditions but remained lower for the ice slurry condition for the first 30 minutes of exercise (P = 0.001). After exercise to exhaustion, mean rectal temperature was higher for the ice slurry condition than for the cold water condition (39.36°; SD, 0.41° vs 39.05°; SD, 0.37°; P = 0.001). Mean skin temperature showed a similar pattern to rectal temperature except that the conditions did not differ during or after exercise. During the prerun period, heat storage was lower after ice slurry than after cold water ingestion (-18.28 W/m vs -7.84 W/m; P = 0.001), but during exercise, heat storage was greater after ice slurry than after cold water ingestion (100.10 W/m vs 78.93 W/m; P = 0.005), although the mean rates of heat storage were similar between conditions. During exercise, participant ratings of thermal sensation and perceived exertion were lower after ice slurry than after cold water ingestion, except at exhaustion, when the ratings were similar. CONCLUSIONS: Ice slurry (slushy) compared with cold water ingestion prolonged running time to exhaustion in hot and humid conditions, reduced rectal temperature during exercise, and allowed rectal temperature to rise higher before the runner reached exhaustion."