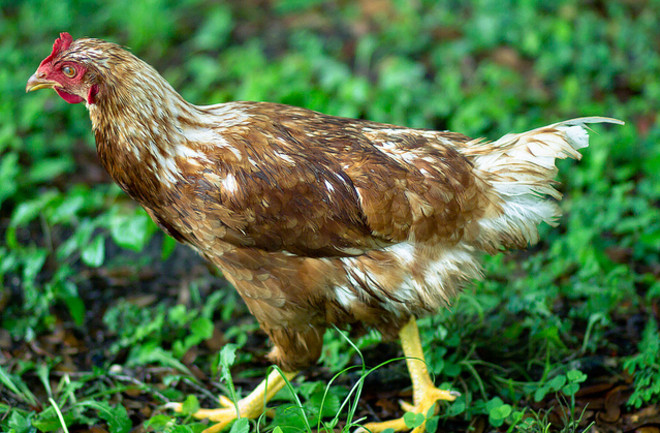 Photo: flickr/Drew CoffmanAre you worried about getting malaria? Well, according to this study, you might be able to avoid it by carrying a chicken everywhere you go. Here, scientists report that Anopheles arabiensis mosquitoes -- the species that carries malaria -- do not bite chickens, and are actually repelled by their odor. In fact, when the researchers set up traps, many fewer mosquitos were captured in traps next to a caged chicken. The researchers also identified the specific chemicals in "chicken odor" that repel the mosquitoes. These findings may lead to insect repellents based on chicken odor, and give "tastes like chicken" a whole new meaning!Chicken volatiles repel host-seeking malaria mosquitoes "Background Anopheles arabiensis is a dominant vector of malaria in sub-Saharan Africa, which feeds indoors and outdoors on human and other vertebrate hosts, making it a difficult species to control with existing control methods. Novel methods that reduce human-vector interactions are, therefore, required to improve the impact of vector control programmes. Investigating the mechanisms underlying the host discrimination process in An. arabiensis could provide valuable knowledge leading to the development of novel control technologies. In this study, a host census and blood meal analysis were conducted to determine the host selection behaviour of An. arabiensis. Since mosquitoes select and discriminate among hosts primarily using olfaction, the volatile headspace of the preferred non-human host and non-host species, were collected. Using combined gas chromatography and electroantennographic detection analysis followed by combined gas chromatography and mass spectrometry, the bioactive compounds in the headspace collections were identified. The efficiency of the identified non-host compounds to repel host-seeking malaria mosquitoes was tested under field conditions. Results The host census and blood meal analyses demonstrated that An. arabiensis strongly prefers human blood when host seeking indoors, while it randomly feeds on cattle, goats and sheep when found outdoors. However, An. arabiensis avoids chickens despite their relatively high abundance, indicating that chickens are a non-host species for this vector. Eleven bioactive compounds were found in the headspace of the non-host species. Six of these were species-specific, out of which four were identified using combined gas chromatography and mass spectrometry. When tested in the field, the chicken-specific compounds, isobutyl butyrate, naphthalene, hexadecane and trans-limonene oxide, and the generic host compounds, limonene, cis-limonene oxide and β-myrcene, significantly reduced trap catches within the house compared to a negative control. A significant reduction in trap catch was also observed when suspending a caged chicken next to the trap. Conclusions Non-host volatiles repel host-seeking An. arabiensis and thus play a significant role in host discrimination. As such, this study demonstrates that non-host volatiles can provide protection to humans at risk of mosquito-vectored diseases in combination with established control programmes." Related content: Flashback Friday: Could the next all-natural insect repellent be made out of earwax?Chickens prefer beautiful humans.NCBI ROFL: Beer Consumption Increases Human Attractiveness to Malaria Mosquitoes.