Want to avoid dying from a rattlesnake bite? Wear jeans. 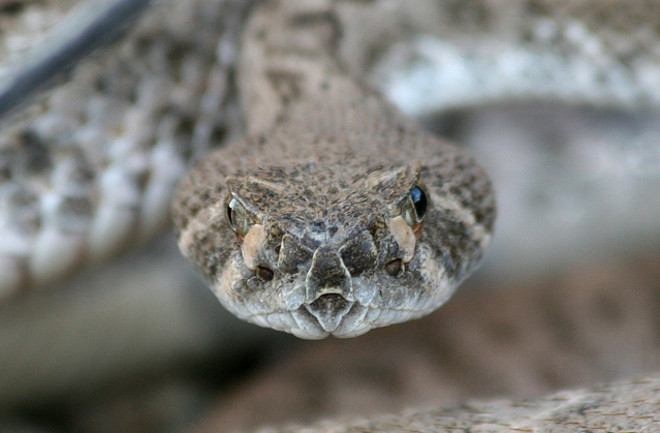 Image: Flickr/Brent MyersSnake venom is something best avoided entirely. But how can you protect yourself if you do happen to get bitten? According to this study, one way to reduce your venom exposure is to wear jeans. These scientists filmed rattlesnakes striking fake limbs, some of which were covered in denim. Turns out the snakes were only able to inject a third of the venom into the be-jeaned limbs, leaving venom to be harmlessly absorbed by the denim fabric. No wonder Samuel L. Jackson wore jeans on that plane!Denim clothing reduces venom expenditure by rattlesnakes striking defensively at model human limbs. STUDY OBJECTIVE: Venomous snakebites can be painful, costly, and potentially life threatening. We seek to learn whether ordinary clothing (denim material from blue jeans) interferes with the kinematics of venom delivery, thereby reducing the amount of venom injected by a representative viper into a human limb. METHODS: In a laboratory study, we used model human limbs (warm, saline solution-filled gloves) to elicit defensive strikes from small and large southern Pacific rattlesnakes (Crotalus oreganus helleri). Each snake was videotaped biting a bare glove and a denim-covered glove. RESULTS: The snakes injected significantly less venom into denim-covered gloves than bare gloves during defensive strikes, with a 60% reduction for small snakes and 66% for large snakes. Latency to bite, number of bites, and duration of fang contact during the bite were similar for the 2 glove types, suggesting that the 2 targets elicited similar defensive behaviors and strikes. Several findings suggested that denim interfered with venom delivery, including the high proportion of dry bites for denim-covered gloves and the large quantity of venom spilled harmlessly on the denim cover. Large rattlesnakes struck more readily, maintained longer fang contact during the bite, and delivered 26 to 41 times more venom into gloves than small snakes. CONCLUSION: In our model, denim clothing proved effective at reducing venom injection by both small and large rattlesnakes. Wearing long denim pants as an alternative to shorts may provide a simple, low-cost means of reducing the severity of snakebites. Related content: A scientific use for… used tampons?!?Snakes are ‘righties’–with their penis, that is.Horrifying study suggests pythons kill their prey by squeezing until the brain becomes over-pressurized.